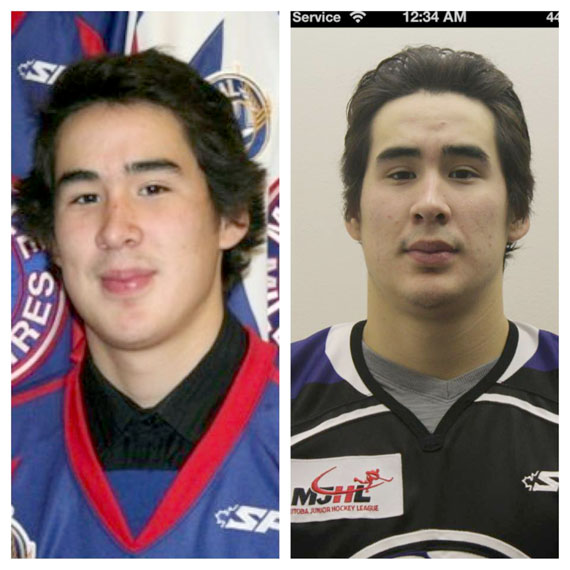 Roger Tagoona says that if he works hard and plays well, he may get a chance to graduate to the Fort Wayne Komets of the East Coast Hockey League.

On the first day of a professional selection camp in Dayton, Ohio, Roger Tagoona of Rankin Inlet showed the coaches what he’s made of — he threw down the gloves and brawled.

“Yeah, I hit a few guys, and the guy on the bench on the other team asked me to fight. I said yes and then we went at it,” Tagoona said, adding that the guy he fought was a “big boy.”

The fight may have ended in a draw, but Tagoona won the confidence of his coaches afterwards.

“I play a very physical game, you know. I was fighting, I was hitting. That’s the reason why I’m sticking around,” Tagoona said — leaving out the fact that on the first day he also scored a goal.

And because of his grittiness, the Dayton Demonz of the Federal Hockey League in the northeastern United States is offering Tagoona his first professional contract.

The FHL is considered a lower level, single “A” professional hockey league with an average salary of between $175 and $300 a week.

That makes Tagoona one of just a handful of Nunavummiut to turn professional in hockey, including his idol — and the inspiration behind his playing style — Jordin Tootoo.

“I think most of the kids in Rankin, including myself, play our game based on the way he plays it,” Tagoona told Nunatsiaq News in a telephone interview his new apartment in Dayton.

Tagoona, a left-winger who stands six feet and weighs 193 pounds, left Rankin almost four years ago to pursue his dream of top-level hockey.

But you can’t take the Rankin Inlet out of the boy, he says.

“We’re definitely a lot more physical than people out of town or in other places. We take pride in that.”

And assistant coach of the Dayton Demonz Jack Collins is grateful for it too.

He said Tagoona, who is now the youngest player on the team at 21, was picked because of his style.

“I hear he is a pretty hard-nosed kid. And not afraid to drop the gloves and bang in the corners, and that’s something we’re looking for,” Collins said.

“He got into a little fisticuffs with another player. He showed a side there that he wasn’t afraid to be physical,” Collins said.

Collins said Tagoona will play on the third line as a “grinder” — but the options don’t just stop at Dayton.

The Demonz are affiliated with the Fort Wayne Komets of the double “A” East Coast Hockey League.

Players can move up to the ECHL if they play well, something that happened to one of Tagoona’s old teammates in Dayton last year.

“It’s a stepping stone to a higher league,” Collins said.

And Collins said Tagoona has the potential to make the jump.

“I’m not sure that it will be this year, but at least there will be a year of pro hockey under his belt,” he said.

As for Tagoona’s old coach in Rankin, David Clarke — someone who played with the Tootoos while growing up in Rankin Inlet — it’s no surprise Tagoona has made the leap to professional hockey.

“Roger always had a really good work ethic. He was always the hardest worker,” Clarke said from Rankin Inlet.

Tagoona credits much of his talent to Clarke and Rankin Inlet — from encouraging him to move south, to opening up the hockey arena during off-hours when he visited from the south.

“There were guys at the rink letting me on any time just so I could skate. The high school was letting me use the weight room after school. And guys were always there for support,” Tagoona said.

But Tagoona said that it might be a “long shot” to truly follow in the Jordin Tootoo’s footsteps and play in the National Hockey League, but he’s still hoping.

“You just [have to] get your foot in the door and anything can happen from there,” Tagoona said.

That’s his message to all aspiring hockey players in Rankin.

“It’s no longer an excuse to say that you can’t do it because you’re from Rankin, or you’re so far away,” he said.

“They just got to put in work, and they got to work their butts off. It’s definitely not easy, but it’s worth it.”

Tagoona will wear number 21 this season for the Demonz — number 22 was available, but he said “that’s Jordin’s number, not mine.”