“Our role was not involved specifically within the school” 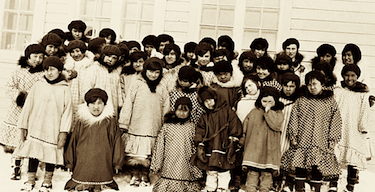 Children from the western Arctic gather outside a residential school in this undated file photo. (FLEMMING/NWT ARCHIVES: N-1979-050-0101)

OTTAWA — The RCMP was not aware of the abuses happening in the Indian residential schools, according to a report that covers more than 100 years of the Mounties’ involvement in one of Canadian history’s darkest chapters.

The document is the first of its kind to assess the link between the RCMP and the residential school system. It looks into how 150,000 native children were taken from their families and placed in government-funded, church-run schools where cases of physical and sexual abuse took place. The schools opened in the 1870s.

“The report shows that Indian residential schools were essentially a closed system. The problems in the schools didn’t attract police attention, police intervention because they were dealt with, for the most part, internally,” said Graham, who presented the report at the Truth and Reconciliation Commission that is being held in Halifax.

He said the RCMP may have contributed to the problems taking place in the schools.

“Our role changed over time in the early years. We often acted as truant officers and that wasn’t just specific to residential schools, that also applied to other schools in some communities across the country,” he added.

Truancy represented 75 per cent of the cases itemized during the research of the report.

The document concluded “the police were not perceived as a source for help but rather as an authority figure who takes members of the community away from the reserve or makes arrests for wrong-doings.”

The data in the report was collected over a 30-month period between April 2007 and September 2009 to answer questions about the RCMP’s relationship with schools, students, federal agencies and departments.

Prime Minister Stephen Harper apologized on behalf of all Canadians in June 2008 as part of a settlement with former residential school students. That settlement included cash payments for survivors, counselling and an official remembrance day.

In 2004, the RCMP commissioner at the time publicly apologized to Canada’s Aboriginal Peoples.

“We, I, as a commissioner of the RCMP, am truly sorry for what role we played in the residential school system and the abuse that took place in that system,” said Giuliano Zaccardelli.