“Despite all the difficulties, we’re seeing fur coming back” 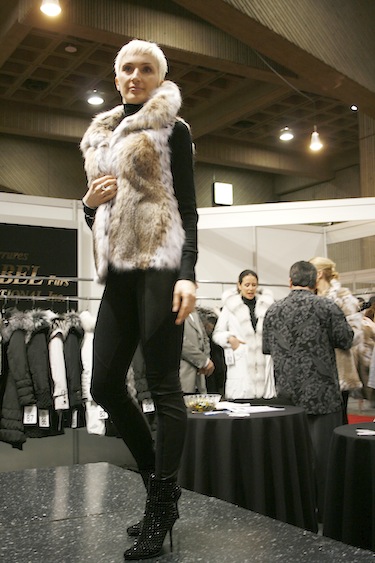 A model shows off a fur vest April 29 at the NAFFEM fur show in Montreal. (PHOTO BY DAVID MURPHY) 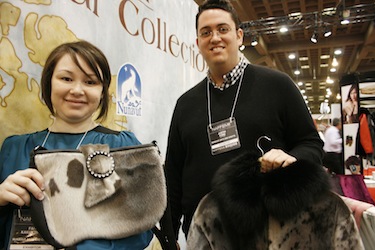 Nunavut Arctic College fur production students Faith Kakuktuq and Justin Ford hold up some of the sealskin products on display April 29 in their booth at the NAFFEM fur show in Montreal. (PHOTO BY DAVID MURPHY)

The scene was plush, but, under the glam, there was uncertainty.

Among the blows throwing the future of NAFFEM’s trade show into question: a bad economy, a strong U.S. dollar and the April 25 loss suffered by a consortium of fur associations and Inuit groups who lost a court challenge to the European Union’s 2009 import ban on seal products.

But that didn’t douse the usual swanky atmosphere at NAFFREM, held deep beneath Place Bonaventure in Montreal.

At many booths there was a constant flow of models in six-inch heels strutting down raised catwalks to new age European trance music.

Some fur aficionados mingled with business owners in smart suits and polished shoes, while others chose to rest on black-and-red leather couches with a glass of champagne.

Nunavut also got in on the action with a low-key booth called Northern Canadian Wild Fur Collection, which featured sealskin parkas, boots and scarves.

NAFFEM honoured three of the eight students from Iqaluit’s Nunavut Arctic College’s fur and production class with awards in the “Fur Re-invented” contest for best menswear, women’s wear, and accessory.

“It’s a lot of fun because the students are here for the first time,” said Meeka Kilabuk, the NAC’s fur and production instructor.

Kilabuk enjoyed previous success at NAFFEM when her women’s wear design won the grand prize in 2008.

And in 2010 she entered the menswear competition with a sealskin parka — that coat eventually ended up competing at an international design competition later that year.

“I put Canada on the map for sealskin coats,” Kilabuk said.

The experience from NAFFEM gives her students the know-how to market products, establish contacts and maintain a booth at an exhibit.

“They need to see that in order to get ready for their own business one day,” Kilabuk said. “We have potential [for eight] new businesses for students here.”

But the sealskin trade could use an extra pair of hands right now.

The sealskin trade has experienced a rapid decline in recent years, something the Fur Institute of Canada’s executive director, Rob Cahill, said is due to the EU’s ban on sealskin products.

“The situation with the EU is unfortunate. It’s not over,” Cahill said, referring to the recently denied appeal in the General Court of the European Union.

Canada and Norway are now taking their complaints to a World Trade Organization panel, which is hearing the case until April 30 in Geneva, Switzerland.

If Canada and Norway win that challenge, it might restrict other countries from passing similar bans.

And if the WTO finds the EU guilty of unfair international trade rules, the EU will probably either lift the ban, or pay a penalty to Canada for lost revenues over the past four years — but keep the ban in place, Cahill said.

Cahill said the WTO penalty could amount to around $5 million a year since the ban took effect in 2009.

“For the North and for the Arctic seals we clearly have a problem,” said the executive vice-president of the Fur Council of Canada, Alan Herscovici.

“Two of the main markets on the world — Europe and the United States — are closed by import bans. Based on no science, [the bans] are just political,” he said.

Meanwhile, business remains tough for the Canadian fur trade in general, and that may force NAFFEM to stop its annual show or transform it.

Among the reasons for this dry-spell for the fur industry, according to Herscovici: the ongoing recession — people have less disposable incomes for clothing , more department stores taking over the market, cheaper labour costs in China giving the country a stranglehold on the industry, and bad publicity from animal activist groups like PETA.

“When the Canadian dollar was much lower, it was more cost effective to come to Canada. But with the dollar high, that’s another reason our business has been tougher,” he said.

“With the difficult business, some of the Americans got frustrated and said, ‘you know what, an airfare is more expensive for buyers to come,’ so they launched this competing fair in Chicago.”

Kilabuk, who has been coming to the show for five years, said the 2013 NAFFEM was “very small compared to other times,” and there have been fewer exhibitors year after year.

Herscovici said the format for the show would change for next year — possibly to a high-end fashion show— but “hopefully it won’t come to an end.”

But its not all doom-and-gloom for the sealskin industry, said Herscovici.

“It’s an exciting time, despite all the difficulties, we’re seeing fur coming back so strongly,” he said.

“We believe there’s tremendous opportunity for seal skin, and the market even in Canada,” Herscovici said. “The innovations are really cool.”

“Nunavut creations are very interesting. They can’t even keep up with the demand in the Nunavut creative designs and products,” he said, adding that there’s more of a global trend in fur trims on parkas manufactured by firms like Canadian Goose, for example.

“For seal products … as garments, accessories, [the demand] is strong. There’s also an increase of seal meat here domestically and internationally.”