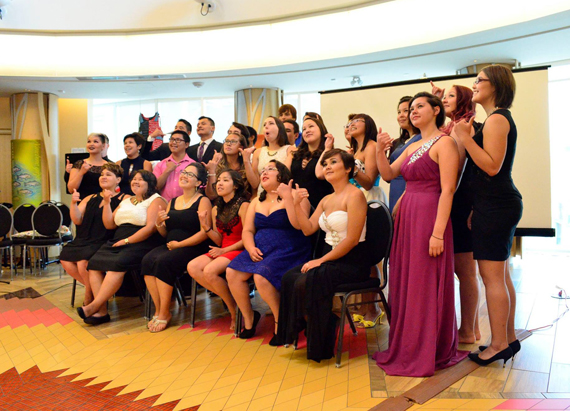 Nunavut Sivuniksavut’s 2016 graduating class celebrates in Ottawa last year. Nunavik will open its own version of the college-level program in September 2017. (FILE PHOTO)

Nunavik’s new Montreal-based college program is ready and waiting for its first intake of Inuit students.

Modelled after the successful Ottawa-based Nunavut Sivuniksavut, the Nunavik version is now slated to begin delivering classes in September 2017.

Now, Kativik School Board program coordinators plan to visit the region in an effort to encourage and recruit between 10 and 15 students to fill Nunavik Sivunitsavut’s first class.

“We’re planning to go to all the communities to visit the schools, to visit the youth,” said Lisa Koperqualuk, Nunavik Sivunitsavut’s coordinator. “We want to reach out to those students who will be graduating from secondary school.”

Registrants must be Nunavik Inuit and must have completed their secondary studies.

Beyond that criteria, Koperqualuk said the only major barrier is emotional: the challenge of leaving home and adapting to life in downtown Montreal.

“It’s hard to leave—homesickness is a real issue,” Koperqualuk said. “It seems like there’s more hesitance from youth in the smaller communities to pursue secondary studies, so I’m hoping to go there and encourage families.

“We want Inuit youth from the smaller communities to come here and graduate,” she said. “How do we achieve that? To provide as much support as we can.”

Nunavik Sivunitsavut will be housed in the Avataq Cultural Institute’s office in Montreal’s Westmount neighbourhood. A large, open-concept classroom, office space and reception area have been renovated to accommodate the program.

The curriculum has been accredited through John Abbott College, which already hosts the KSB’s English-language college studies.

The one-year program will be split into two sessions, offering general education courses that can be used as credits towards any other CEGEP program.

Program courses include a section on Inuit art and culture; physical education and Inuit games; Inuktut language skills; Inuit history; a history of Nunavik’s land claim and English. The KSB may add a French language component to the program in future years.

Nunavik Sivunitsavut has been years in the making; last fall, the program finally secured a $666,000 federal grant it needed to launch.

That’s six years after the KSB first announced plans in 2010 to open a made-in-Nunavik college-level program with the goal of offering students a chance to learn their history and gain cultural knowledge in an accredited and urban setting.

“It’s so important that our Inuit youth be proud of who they are,” Koperqualuk said. “This whole program is geared toward Inuit and puts them in touch with their own identity.”

Nunavik Sivunitsavut’s goal is also to help students discover their skills and what contributions they can make professionally, as graduates.

“Everything that’s going on today has a connection with the global world as well,” Koperqualuk said. “When they finish his program, they’ll have the knowledge required to work for Inuit organizations.

Program details and application forms are available this week at the program’s new website sivunitsavut.ca.

You can also follow the program’s development at Facebook.com/sivunitsavut.