“Sometimes we get things wrong” 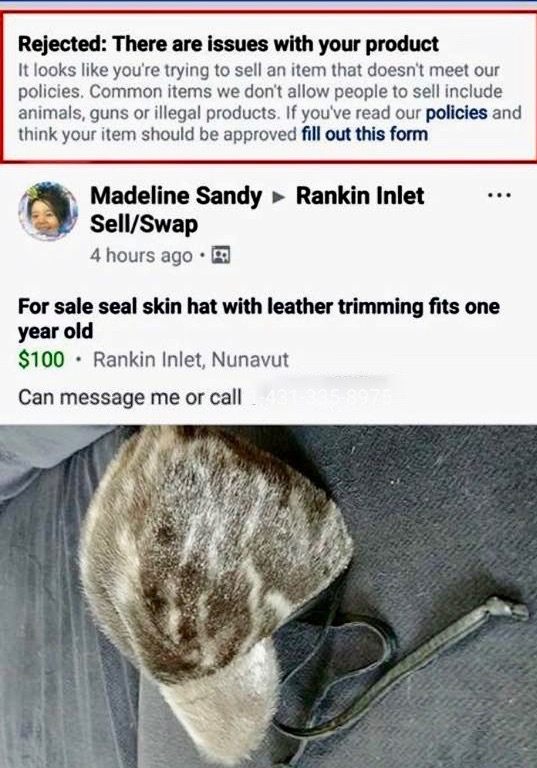 Complain to Facebook if you’re trying to sell a sealskin item on a swap-and-sell page and your posting is rejected. This hat was rejected in error, Facebook said.

Madeline Sandy of Rankin Inlet can once again post a photo of a child’s sealskin hat with leather trim on the Rankin Inlet Sell/Swap Facebook page if she wants.

And this time she won’t see her posting removed or this message: “Rejected: There are issues with your product. It looks like you’re trying to sell an item that doesn’t meet our policies. Common items we don’t allow people to sell include animals, guns or illegal products.”

“This post was removed in error and we’re very sorry about the mistake. Our team processes millions of reports each week and sometimes we get things wrong,” a Facebook spokesperson, who did not want his name reported, told Nunatsiaq News.

But this isn’t the first time such a mistake has been made. Last December, right before Christmas, an Iqaluit woman found that Facebook had removed her posting for the sale of new sealskin pualuks (mittens) on one of the city’s sell-and-swap pages.

Facebook said at the time, in a statement forwarded to Nunatsiaq News, that “we recognize the deep importance of seal and other animal products to Indigenous Canadians and want to clarify that products like the one the seller posted are allowed for sale on our platform. This post was removed in error and the seller is encouraged to repost the item. We apologize for this mistake and value the feedback that helped us identify and correct it as quickly as possible.”

Facebook said it had reviewed its commerce policy, which does not allow the sale of animals, living or dead—including pelts—and determined that items like mitts, jewelry, boots and jackets are allowed within the policy.

If a seller’s items are flagged and removed when they feel that they shouldn’t be, the seller can request an appeal.

Content prohibited on Facebook still includes illegal prescription or recreational drugs and tobacco products such as snuff, which has also been advertised on Facebook in Nunavut, as well as adult products or services, and alcohol.