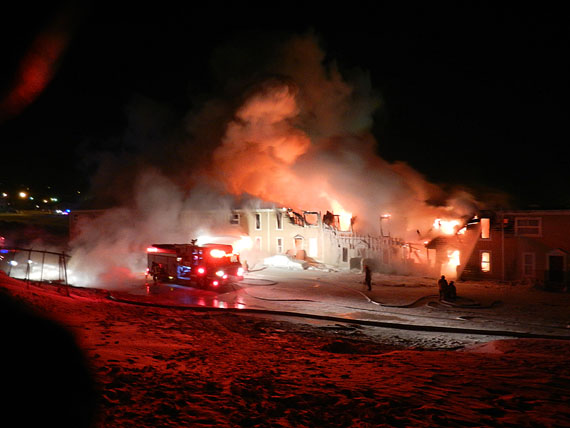 Flames tear through the 300-section of the Creekside Village rowhouse development on Feb. 27, 2012. In 2012, the Iqaluit fire department fought 46 fires that produced about $9.2 million in property losses. (FILE PHOTO)

Residents already know that 2012 was a bad year for fires in Iqaluit, but a statistical report tabled April 30 at an Iqaluit City Council meeting reveals how bad it really was.

Submitted by Luc Grandmaison, Iqaluit fire chief and director of emergency and protective services, the report shows that in 2012, fires in Iqaluit killed two people, inflicted $9.2 million worth of losses to property and injured 13 people, including five firefighters.

And 80 per cent of those financial losses — $7.4 million — occurred in “suspicious” fires, the report found.

Most of that is represented by the devastating fire that destroyed 22 rowhouse units at Creekside Village on Feb. 27, 2012 and claimed the lives of two young adults.

In spite of an investigation, no one has been charged in relation to the Creekside tragedy.

Eight other suspicious fires contributed to the $7.4 million in losses and eight other fires causing an additional $235,597 in losses are due to confirmed arson cases. The community suffered 46 fires in all.

And in addition to the two fatalities, five firefighters and eight civilian residents were injured in fires, the report said.

Also, the most devastating fire losses in 2012 occurred at night or in the early morning hours.

Most fire casualties, eight in all, occurred at night or early in the morning.

Since 2008, fires in Iqaluit have injured 23 people and taken four lives.

Every October, during National Fire Prevention Week, members of the Iqaluit fire department every elementary school and the middle school to hold a fire drill and provide students with safety messages and fire prevention information, the report said.

They also host youth groups, such as the Girl Guides, at the fire hall throughout the year .

The city ambulance service had a busy year too, fielding 1,577 calls.

Iqaluit’s Department of Emergency and Protective Services cost $3.1 million to operate in 2012, and accounted for slightly less than 11 per cent of the city’s total operating costs.