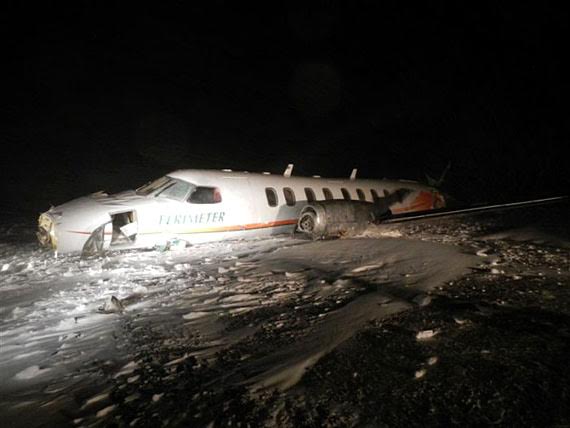 An infant died, while six passengers and two crew were injured in the Dec. 22. 2012 crash of a Fairchild Metro 3 turboprop aircraft operated by Perimeter Aviation LP, about a half a kilometre from the end of the Sanikiluaq airport runway. (FILE PHOTO)

The crash of Perimeter Aviation flight 993 in Sanikiluaq, which killed a six-month-old infant when it missed the runway Dec. 22 2012, came in “too high, too steep and too fast,” investigators with the Transportation Safety Board of Canada said June 29.

The TSB released its investigation report two and half years after the Fairchild Metro 3 turboprop aircraft, charted by Keewatin Air and operated by Perimeter Aviation struck the ground about a half of kilometre from the end of the runway in Sanikiluaq.

But Isaac Appaqaq, the six-month-old baby on board, was thrown from his mother’s lap on impact and died from a head injury.

His death has raised serious questions about air travel safety for infants and young children, with the TSB now calling for better safeguards for young air travellers.

“In the case of severe turbulence, a sudden deceleration, or a crash such as this one, research has proven that adults are not strong enough to restrain a lap-held infant just by holding on to them,” said Kathy Fox, chair of the TSB, during a June 29 news conference.

“And just like in cars, adult lap belts are not suitable to restrain young children,” she added. “This accident saw an infant ripped from his mother’s arms and killed in the subsequent impact, even though everyone else survived.”

First, the TSB is asking Transport Canada to require commercial air carriers to collect and report data on the number of their infant and toddler passengers — statistics that are not currently available.

And second, the TSB called for the mandatory use of restraint systems for infants and toddlers flying on aircraft.

On commercials flights, children aged two years old and under do not require their own seats and are most often held on the lap of a parent.

But the safest place for an infant or young child is buckled into their own seat, TSB investigators said.

Although some child restraint seating designed for cars can also be compatible in aircraft, the TSB wants Transport Canada to work with industry to develop age and size appropriate child restraint systems, and mandate their use.

“We think infants and children deserve an equivalent level of safety as adults on board aircraft, and that is why we are calling on Transport Canada and the aviation industry to take action,” Fox said.

“It’s time to do right by our children.”

Although investigators say the death of an infant passenger stood out most in the aftermath of the December 2012 accident, the TSB identified other problems, such as poor pre-flight planning, crew communication problems and unstable approaches during the flight.

Perimeter Aviation flight 993 was originally scheduled to depart Winnipeg the morning of Dec. 22 2012, but was delayed by several problems, including repairs to the cargo door.

When the flight finally left four hours behind schedule, the crew realized it had forgotten to take copies of their instrument approach procedures for the landing in Sanikiluaq.

But rather than return to Winnipeg, the captain radioed to obtain the information, which is used help aircraft to descend and line up with the runway.

As the aircraft prepared to land that evening around 6:00 p.m., the crew’s initial plan was to come in on a straight approach and land eastbound onto the runway.

But weather conditions — wind and snow, as reported at the time — made that impossible, the TSB report said. And with no published instrument approach for that runway, the crew used procedure for runway 27 and circled around to land on the runway from the opposite direction.

Visibility was poor, though, so the crew circled a second time, only to lose sight of the runway.

At this point, the crew understood that landing at the closest alternate destination in nearby Kuujjuaraapik was not possible due to weather conditions, so the crew decided to attempt another landing at Sanikiluaq.

“With the crew feeling increasing pressure to land, there was an increase in stress, workload, frustration and fatigue, resulting in attentional narrowing and a breakdown in crew communication,” the report noted.

The crew made a second attempt to land on runway 27, when a tailwind pushed the aircraft’s groundspeed and forcing the plane down too quickly.

By the time the captain decided to reject the landing, it was too late, the TSB said, and the aircraft struck the ground 525 feet past the runway.

The aircraft continued to bounce along the rocky terrain for another 1,110 feet.

In its findings, the TSB said that the lack of instrument approach charts negatively affected the crew’s situational awareness, leading to an unstable final approach was unstable; “the aircraft, halfway down the runway, was too high and too fast,” the report said.

In the weeks and months following the accident, however, Perimeter Aviation began making instrument approach charts available 24 hours a day through an intranet site.