Reporting sexual abuse in Nunavut: why and how to do it

“It’s time to talk about it” 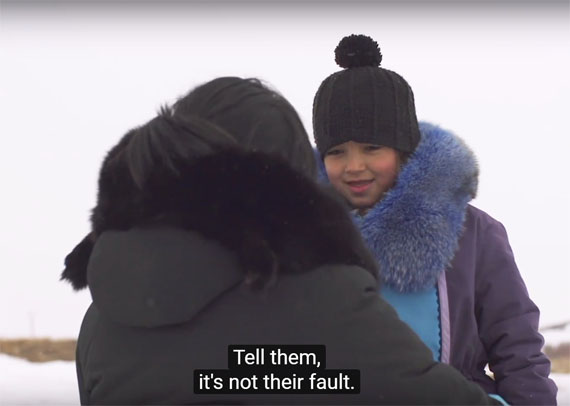 Pauktuutit’s Believe-Ask-Connect campaign video, pictured here, encourages children to speak up about child sexual abuse and for adults to support and listen to them.

So far into 2018, a handful of Nunavummiut may have become household names in the territory—for all the wrong reasons.

Susan Aglukark made a stunning public disclosure of childhood abuse at the hearings of the National Inquiry into Missing and Murdered Indigenous Women and Girls in February, naming Norman Ford’s historical crimes.

More recently, Nunavummiut have learned some of the gruesome extent of childhood sexual abuse committed by men in positions of power: former Sanikiluaq teacher Johnny Meeko and, more recently, Igloolik businessman Ike Haulli, who sexually abused children between 1968 and 1986.

The flurry of news has prompted a discussion about childhood abuse, but it also suggests many more incidents remain unreported.

A 2012 Statistics Canada report found rates of sexual offences against children and youth were highest in Nunavut and the other territories.

Complicating that even further is what many consider a culture of silence around sexual abuse in Nunavut’s communities.

The Haulli judgement, for example, referred to the pushback some victims received from family members when they chose to report the abuse.

Rebecca Kudloo, president of Pauktuutit Inuit Women of Canada, won’t comment on specific cases like Haulli’s, other than to call the court judgement on it “a relief.”

“It’s time to talk about it,” she said. “Otherwise, it will keep happening.”

While sexual abuse isn’t specific to women, prevention efforts make up a big part of Pauktuutit’s work. One of its campaigns called Believe-Ask-Connect encourages children to speak up about child sexual abuse and for adults to support and listen to them.

But Kudloo’s experience—and that of many others in Nunavut—is that stories of abuse trickle through communities and through generations, often without ever being addressed publicly.

“In a small community, people are not able to distance themselves from these things,” she said.

“There are many reasons, like the reluctance to report. Who do I report to? A lot of times there are no resources for them to go to [especially] without their parents supporting them,” Kudloo said.

“I think there can be a lot of pressure not to report, especially when the abuser is a breadwinner or [considered] an upstanding member of the community.”

But Nunavummiut are in fact obligated by law to report any abuse they know about.

Under Nunavut’s Child and Family Services Act, anyone who has information or reasonable grounds to believe that a child is being abused must report that to authorities.

The process for reporting or disclosing child abuse is the same in each community across the territory.

The first line of contact is typically a child protection worker or a peace officer. Or Nunavut’s Family Services Department can designate another authority to take the report.

Once the report is made, child protection services work with the RCMP to investigate and determine the next steps, including whether the child needs to be apprehended from their home.

The name of the individual making the report is always kept confidential, and the act protects those individuals from being sued should it turn out to be a false alarm.

“We want victims to know that we’re here to help”

The Department of Justice’s victim services division offers training to its service providers and front-line workers—nurses, mental health workers and police officers—to help those people respond in an appropriate way to the sensitivity involved in reporting abuse, especially when it involves children.

“Any time [a major disclosure] comes up, we definitely see an increase in reporting,” said Lorri Martinez, the Iqaluit-based victim services’ care coordinator.

“We want that; we encourage that. To not seek help is detrimental. And we want victims to know that we’re here to help.”

While the encouragement is there, Kudloo recognizes it takes a tremendous amount of courage to come forward, and telling a stranger can be intimidating.

“I think a lot of victims feel alone,” she said.

In Kudloo’s home community of Baker Lake, a local organization called Mianiqsijit offers family counselling and community education that is largely focused on abuse prevention. The programs are led by a social worker and a local counsellor.

“We talk about family violence,” she said. “A lot of times offenders are victims themselves.”

“If they don’t get the help they need, they go elsewhere to deal with their pain. We need to change attitudes and behaviours.”

If you, or someone you know, have been a victim of abuse of any kind and you’re ready to talk about it, please call your local RCMP or social services worker at one of these phone numbers.

Here are some other support services available in Nunavut: