“From what I’ve experienced to now, this community is amazing” 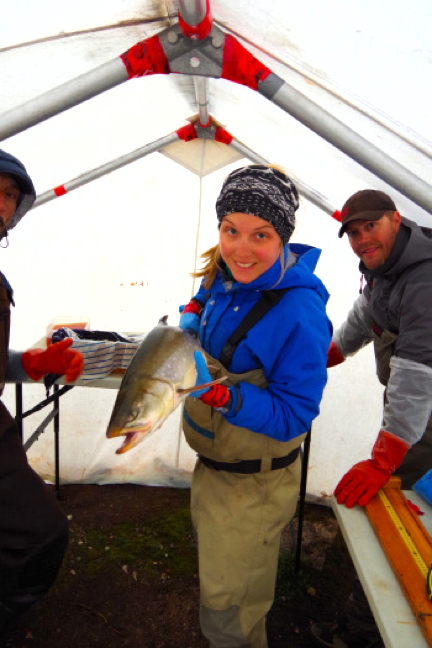 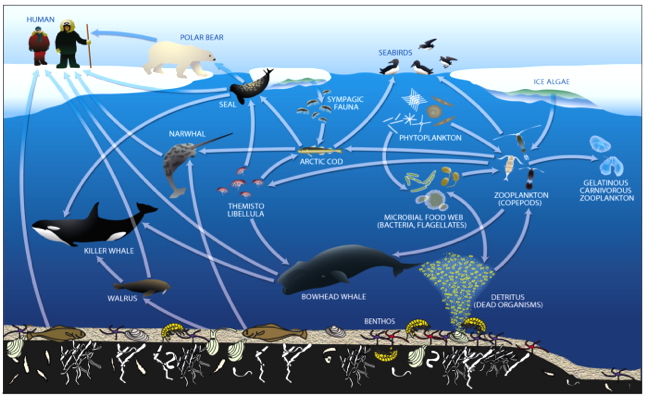 The first hurdle to understanding how the marine food web works near Cambridge Bay is finding out what actually lives there and who eats what. This is an example of a simplified Arctic food web made by researcher Gérald Darnis. Falardeau hopes to make a similar looking graphic specific to Cambridge Bay once her research is completed. (GERALD DARNIS GRAPHIC) 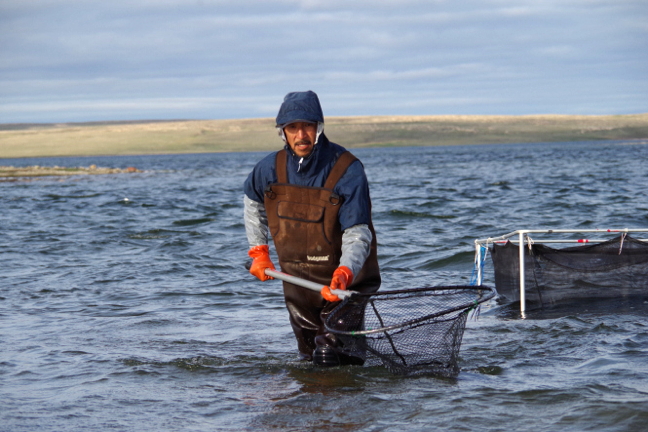 Who eats what? When? And how much?

These are the kinds of questions that keep marine biologists up at night.

Well, maybe not up at night, but busy, at least.

Marianne Falardeau has been busy for the past month in Cambridge Bay — catching fish, scooping up zooplankton, collecting fish and marine mammal tissues from local harvesters and looking at all the strange, tiny things that live in the ocean floor.

And while the McGill University PhD candidate enjoys Arctic research — it’s what she’s been doing for the past five years — she’s not on the water for entertainment.

Falardeau wants to find out what’s living in the waters off Cambridge Bay, what all those sea creatures eat, how much they eat, when they eat and whether mercury is accumulating in some of the higher order animals such as seals, whales and polar bears.

With so little data on the food web there, this kind of information is crucial, Falardeau said, to create a set of baseline data for later comparison when, say, invasive species show up in Queen Maud Gulf and start changing predator-prey relationships.

“In Cambridge Bay, particularly, there’s a lack of scientific knowledge about the marine food web in general compared to other regions in the Arctic,” said Falardeau, on the phone from Cambridge Bay.

“There’s kind of a black hole. We don’t really know what’s going on with the marine food web, how it’s structured, how species interact. So it seemed like a good place to study.”

It’s also important to see how the changing climate is impacting that fragile critter-eat-critter world.

For instance, early sea ice melt means certain marine plants bloom earlier — and that might be out of sync with the life cycle of the creatures who eat those plants.

Also, warmer waters or changing ocean acidity might impact certain Arctic marine life — allowing some to flourish and others to perish. That in turn will have an impact other parts of the food web: the animals they eat, and the animals that eat them.

Any change in the food web has extensive ripples throughout, Falardeau said, which is why she’s spending her summer collecting tissues to bring back to Montreal for DNA extraction and classification: so she can know for certain what’s actually there now.

Of course, when it comes to a lack of knowledge, it’s scientific knowledge she’s referring to, she said.

Falardeau said she has spent three summers on the CCGS Amundsen, a Coast Guard icebreaker that has been retrofitted for scientific research, and while she enjoyed it, most of the work was on the ship.

This project is allowing her to spend time in a community where she can get to know local hunters, trappers and other residents and learn about Inuit culture, history and traditions.

That, she said, has been a highlight of her visit so far.

“From what I’ve experienced to now, this community is amazing, the people are really warm and interested,” Falardeau said. “I’m lucky to be here and I’m really looking forward to discussing more with people. I’m certainly going to organize a few community events at the community hall. And looking forward to that.”

She has made a point of hiring local people through the local hunters and trappers organization, she said, to help with sample collection.

She’s telling harvesters what she needs and how to preserve the samples in the freezer so she can buy more next summer when she returns.

Falardeau is hoping to get out on the Martin Bergmann research vessel for continuing sample collection soon, but chunky ice has blown into the bay hampering the departure schedule.

Other than that, it’s been a bit rainy but Falardeau isn’t complaining. The rain and wind have kept the western Arctic’s notorious swarms of mosquitoes at bay.

Falardeau has about 100 samples in baggies and vials so far and hopes to triple that by the time she leaves in early September.

Then she has to transport all those frozen samples in coolers back to her Montreal lab, and pray that they don’t thaw and degrade on the way. She said First Air has assured her they’ll keep the precious cargo frozen.

“I’ve called them a few times to make sure they’re going to stay frozen. My thesis depends on that,” she said. “I’ll be pretty stressed with this trip. But they confirmed it was really reliable.”

Most of her research is being funded by McGill University and Fisheries and Oceans Canada but she is also collaborating with other organizations for use of equipment and facilities including Oceans Network Canada, the Canadian High Arctic Research Station, and ArcticNet.

You can find out more about Marianne Falardeau, and her Cambridge bay research here.