Inuit treatment centre, one of only two in Canada, to close in March 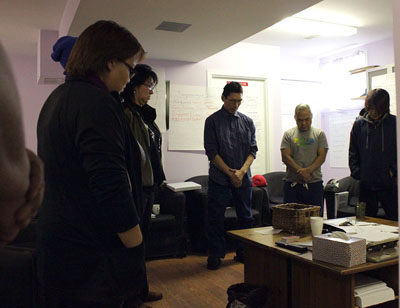 A 2013 morning group therapy session at Mamisarvik Healing Centre begins with a prayer. Clients discuss forgiveness, and their plans for coping in a healthy way once they leave the centre. (PHOTO BY LISA GREGOIRE)

An Ottawa-based residential treatment centre for Inuit recovering from addiction and trauma will close its doors this March 31 because it can’t find enough money to keep going, its parent organization said Feb. 9.

Tungasuvvingat Inuit, an Inuit-specific health and social services provider, has run the Mamisarvik Healing Centre in Ottawa since 2003.

The 12-bed facility provides an eight-week addictions and trauma treatment program, and post-treatment counselling and care.

It launched that year thanks to funding delivered through the Aboriginal Healing Foundation, but the support was short-lived.

When the Aboriginal Healing Foundation wound down its operations in 2013, Mamisarvik lost $800,000 a year in funding, and has since been forced to find new resources, including its own, to stay afloat.

“It is with great sadness that we announce the indefinite suspension of services at the Tungasuvvingat Inuit Mamisarvik Healing Centre effective March 31, 2016 while we evaluate the structure and feasibility of delivering our residential addiction and trauma recovery counselling program,” the organization said in a release.

Over the last 12 years, Mamisarvik has provided treatment to well over 600 Inuit, most from Nunavut, but many from Ottawa and other regions.

And its services are in high demand, including treatment for a wide range of traumas, from the negative effects of residential schools and relocation, suicide, neglect, and sexual and emotional abuse.

After the Aboriginal Healing Foundation closed in late 2013, TI was able to sustain Mamisarvik’s operations largely with support from the Government of Nunavut, which pays about $22,260 for each Nunavut client referred to the program.

A smaller portion of funding came through Correctional Services of Canada, which refers about 15 per cent of Mamisarvik’s clients.

“We are in need of ongoing operational funding as most other treatment centres receive from one level of government or another. We have a proven model of success that has empowered hundreds of lives and we want to link with people who can support those outcomes.”

Malaya Rhéaume, the president of TI’s board of directors, said the decision to close the centre was a difficult one to make.

“We have the experience and expertise for this line of work and TI is committed to finding a financially viable way to help Inuit,” she said.

Mamisarvik’s clients have called the centre a vital service, given the lack of treatment options geared towards Inuit.

Former client Marilyn Kiholik said in 2013 it would be a tragedy if the centre had to close for lack of money.

“There’d be more suicides, for sure, more babies getting hurt and not taken care of,” she told Nunatsiaq News. “All kinds of problems.”