Ivirtivik centre to start fifth year of operation in Montreal 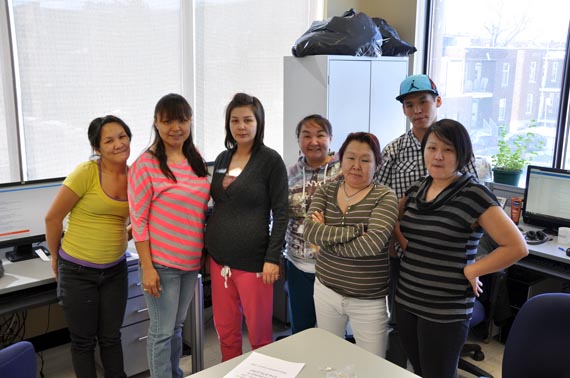 From left, Charlotte Kadjuuk, Barbara Veevee, Jaqueline Evaloakjuk, Salamiva Ilimasaut, Alice (no last name provided), Johnny (name withheld) and Maata Oqutaq are some of the dozens of Montreal-based Inuit who have received support finding work in the city through the Ivirtivik centre, run by the Kativik Regional Government. (PHOTO BY SARAH ROGERS) 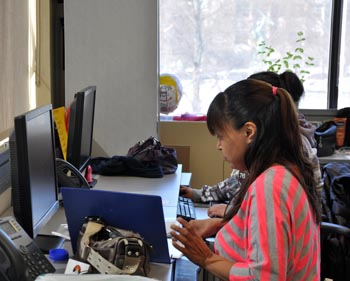 But her energy in the workplace has waned in recent months, said Veevee, who’s worked a night shift cleaning offices for the last two years.

“I’m tired of my mop and trolley,” said Veevee, who moved to Montreal from Pangnirtung 10 years ago.

She also has a 15-year-old son at home, in the suburb of Laval, with whom she’d like to spend more time.

Veevee is one of a handful of Inuit women seated around a large conference table in Montreal’s Verdun neighbourhood at the Ivirtivik centre, an employment and education resource centre for Inuit in the city.

Behind Veevee, a row of computers where other clients quietly tap on keyboards while CBC Radio’s Inuktitut-language newscast streams in the background.

Ivirtivik, which began as a pilot project of the Kativik Regional Government in 2010, is about to go into its fifth year of operation.

Over the last five years, the centre has helped dozens of Montreal Inuit secure employment or enroll in training programs; in January 2014, the KRG opened a second Ivirtivik centre in Inukjuak.

In Montreal, the centre’s three employment counsellors work with anywhere from 12 to 15 full-time participants at a time, helping clients to prepare resumés, scan job ads and develop computer, language or life skills to navigate the job market.

Veevee is one of the lucky ones. She’s been recently employed and has a place to live. Many Inuit arrive in the city without a place to live or the support network even to get settled.

But although she’s integrated into life in Montreal, this time around, Veevee wants to get back to her roots. She’s looking for work at a local Inuit organization, “where I can talk my dialect and eat my country food.”

She hasn’t any new job leads, but at least for now, Veevee can speak Inuktitut with other job-seekers at the centre.

In the weeks or months it might take clients to find work, Ivirtivik also offers stability to unemployed Inuit and a place to connect with other resources for newcomers to the city.

Participants take part in the program weekdays from about 9:00 a.m. to 4:00 p.m. and are paid for each day they attend. A single person who qualifies for welfare benefits might receive about $500 per month, although that amount varies according to their status.

For Johnny, a 22-year-old who just came to Montreal from Inukjuak about a month ago, the centre has become something of a lifeline.

The young man, whose family name Nunatsiaq News chose not to publish, came south looking for a fresh start after struggling with drug addiction.

“I’m looking for a janitor job as soon as possible,” he said. “I’ve been applying, but nothing yet.”

He worked in Inukjuak as a night watchman and water delivery truck driver although neither job translates well to life in Montreal.

“But I’ve learned a lot here, like how to use a computer,” he said.

For those like Johnny, who have no previous work experience in Montreal, Ivirtivik also provides its clients with actual work experience by having participants volunteer regularly with a few local food and clothing banks.

Once they’ve developed a relationship with those centres, they can even get a professional reference to use in their job search.

In many cases though, Ivirtivik clients end up using their unique language skills and Inuit expertise to find work.

Jacqueline Evaloakjuk has managed to find some good interpretation and translation contracts in Montreal since she relocated from Iqaluit in 2012 — one through McGill University’s linguistics department.

She hopes to find more permanent work to support her family; in the coming weeks, Evaloakjuk will give birth to a baby girl, whom she plans to name Amelia.

But while she’s strong in Inuktitut and English, Evaloakjuk struggles with French — a major challenge for many Inuit coming to a French-speaking province.

“I moved here without knowing any French,” said the Nunavut native. “Now I need to learn French fast. But this is a really good resource place.”

As part of the program, College Frontier comes into Ivirtivik to give a French class once a week. And most participants say the classes are important, as the ability to speak French makes a huge difference in finding work.

Ilimasaut is fortunate to have learned French in elementary school in Kangiqsujuaq, where she lived before relocating to Montreal eight months ago.

She’s spent the last two months at Ivirtivik preparing her resume and cover letter and applying for work. And it’s paid off, she added.

The KRG’s current federal funding agreement for the centre comes to an end March 31. The KRG is looking to the Quebec government to continue to fund the Ivirtivik centres in both Montreal and Inukjuak. 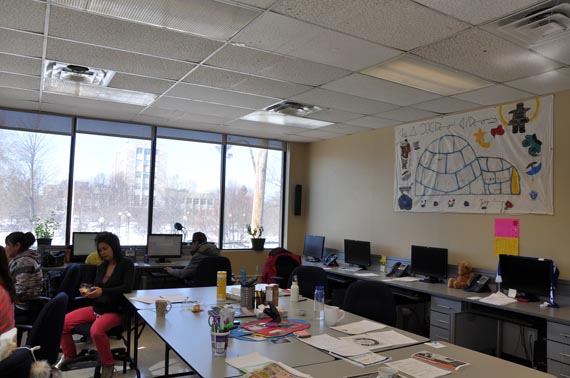