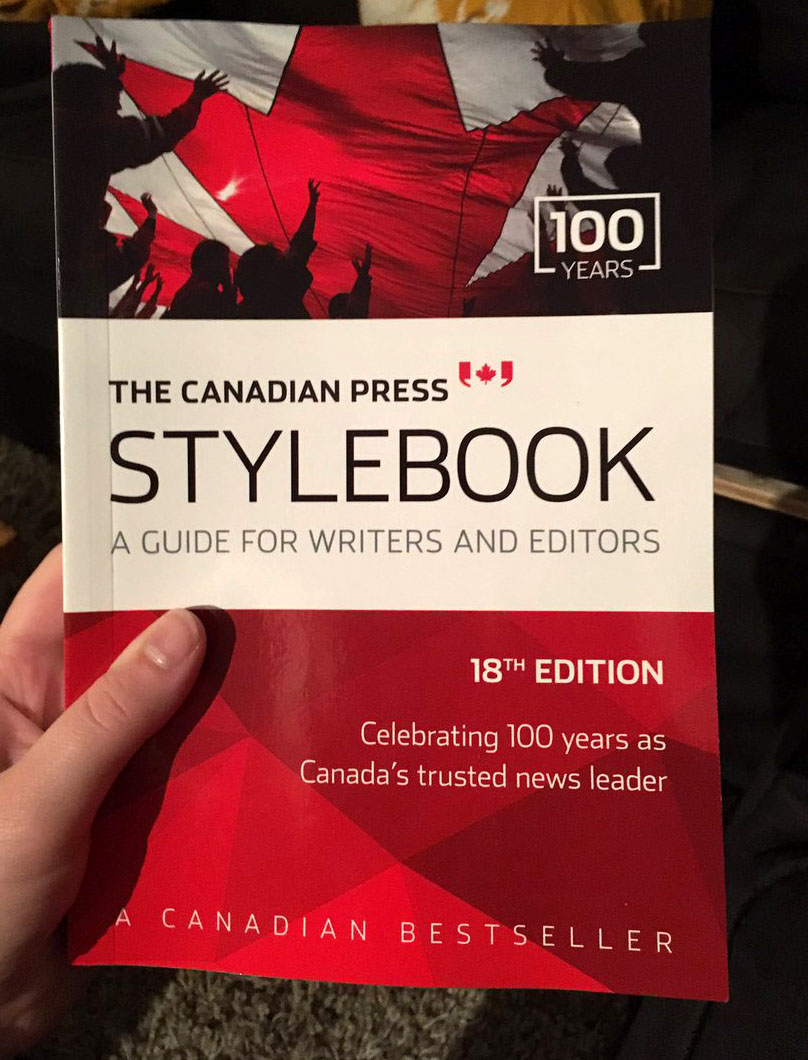 For journalists and communications professionals across Canada, The Canadian Press Stylebook is the go-to source for guidance on writing, spelling and punctuation. The editor of the style guide, James McCarten, said CP will correct the errors that Nunatsiaq News spotted in the guide’s 18th edition and do a second printing. 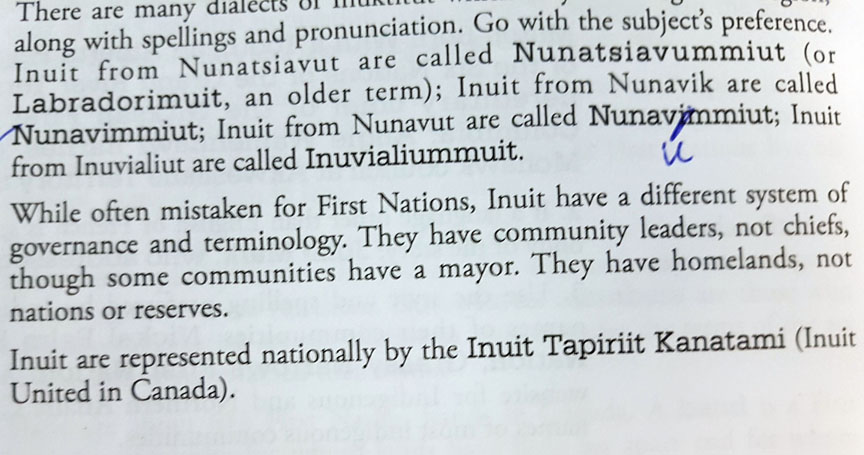 This photo shows a section of the 18th edition of The Canadian Press Stylebook that contains errors pertaining to Inuit nomenclature. (PHOTO BY JIM BELL)

If you’re looking for the correct way to spell “Nunavummiut” or “Inuvialuit,” don’t check the new edition of The Canadian Press Stylebook, or the new Style Guide for Reporting on Indigenous People created by Journalists for Human Rights.

Errors in their Indigenous peoples sections reveal a lack of consultation with Inuit.

The errors in the CP style guide flow from an Indigenous style guide done for CP by Journalists for Human Rights, a Toronto-based non-governmental organization.

Parts of that document were used to inform the 18th edition of The Canadian Press Stylebook, released this past September.

Journalists for Human Rights released a separate guide, with many of the same errors, on Dec. 8.

In the CP style guide, the section on Inuit begins with this disclaimer:

“There are many dialects of Inuktitut which vary from region to region, along with spellings and pronunciation. Go with the subject’s preference.”

But the text that follows contradicts that advice, by including errors, and usages not preferred by Inuit. It reads:

Errors in the above passage include:

• The suffix for “Labradorimiut” is spelled incorrectly as “muit” instead of “miut.”

• “Inuvialuit” is spelled incorrectly on second reference as “Inuvialiut.”

• The term “Inuvialiummuit,” which CP assigns to Inuvialuit, should be spelled as “Inuvialungmiut” or “Inuvialummiut,” or not used at all, since “Inuvialuit” already denotes a people and the suffix “miut” means “people of,” making it redundant.

To confirm the errors in the two style guides, Nunatsiaq News contacted language experts in Nunavut, Labrador and the Inuvialuit Settlement Region.

“Nunavut should be Nunavummiut. Instead of ‘i’ it should be ‘u,’” said Eva Aariak, a former Nunavut premier, teacher and CBC broadcaster who is director of language training at the Pirurvik Centre in Iqaluit.

“The problem I saw while I was reading the section was that there was not enough consultation with people from Nunavut, Nunavik and the West,” Aariak said.

“I’m very disappointed and dismayed … I hope they will be able to correct themselves and provide proper terminology to the guideline,” she said.

Beverly Amos, a regional language coordinator for the Inuvialuit Cultural Centre in Inuvik, confirmed the errors that pertain to her region of the western Arctic.

She said the word used in both guides to identify Inuvialuit is not only spelled incorrectly, but isn’t used by Inuvialuit.

“We don’t really say that, because Inuvialuit is the name of our people,” she said, adding that terms like “Inuvialungmiut” or “Inuvialummiut” are only common among Inuktitut dialects in the eastern Arctic.

“Nunavummiut is the people of the land called Nunavut … [Inuvialuit], it’s the name of a people, it’s not a name of a land.”

Regina Saimat, the Inuit curriculum worker of Jens Haven Memorial School in Nain, Nunatsiavut, confirmed the word “Labradorimiut” is spelled incorrectly in both the Journalists for Human Rights style guide and the latest The Canadian Press Stylebook, where it is spelled “Labradorimuit.”

“Labradorimiut—this is the proper spelling, there is no other spelling … It’s the way it’s always been spelled, Labradorimiut, meaning, from Labrador,” she said.

When asked if there were instances grammatically or regionally where a “muit” suffix would be used, Saimat said “it’s a typing error.”

The reporting guides do correctly state that “Labradorimiut” is an older term, replaced more recently with “Nunatsiavummiut.”

A spokesperson from Inuit Tapiriit Kanatami said the organization is willing to help improve reporting about Inuit.

“While we agree with the need for improved standards of reporting on Indigenous and Inuit content from journalists, we have some concerns about the recently released guide by Journalists for Human Rights,” the spokesperson said.

“ITK was not engaged to help develop the language in this guide, but would welcome the opportunity to contribute and promote better reporting on matters that impact Inuit,” the spokesperson said.

A team of six Indigenous reporters, almost all of them First Nations or Métis, compiled the seven-page style guide on First Nations, Métis and Inuit terminology released by Journalists for Human Rights.

There was only one Inuk journalist in the group, Ossie Michelin of Labrador, who contributed material pertaining to the Inuit regions—information later cited as fact by The Canadian Press.

“I told them at the beginning of the project, there are many different regions and dialects, and I can speak for myself and my own experience from Labrador and here in Quebec.

“They said, ‘there is no perfect candidate.’”

In a Facebook message, Michelin told Nunatsiaq News he regrets the mistakes.

“Someone should have caught them, whether it was me or the other editors. It’s unfortunate, and I regret the errors, but I strongly believe in the style guide, and that it will help.”

Guide editor Lenny Carpenter, a program manager for Journalists for Human Rights, said the project was rushed, but he apologized for the errors.

“As the editor of the guide, I accept full responsibility for the errors and apologize to the people and communities affected,” Carpenter said.

He also said he will work on updating the JHR guide and will forward the revised material to The Canadian Press.

“As a result of this follow up research, I’ve been invited to take part in conference calls with Inuit journalists in the Far North who can advise us on how to correct and improve the style guide,” he said.

CP to fix errors in next printing

CP printed 3,000 copies of the style guide that contain the errors.

“This was a deviation from the norm. I have to take responsibility for the content in the book, but we did put a lot of faith in what they were doing. It’s unfortunate,” he said. “Obviously some errors got through, they didn’t get caught by a number of different people, including myself, so here we are,” McCarten said.

The Canadian Press told Nunatsiaq News that when it comes to drafting language guides for minority groups, they generally don’t rely solely on journalists, but consult with experts, advocates and those impacted.

“I suppose, in hindsight, that’s where we had an issue, was not having another level of community oversight on top of that,” he said.

“The issue of Indigenous style can be very tricky, because from community to community attitudes change, perspectives differ, it can be difficult to provide guidance because there is no consistency from one place to the next. You have to be careful in that respect,” McCarten said.

The Canadian Press did not provide funding to Journalists for Human Rights.

The Canadian Press Stylebook is highly respected and is used by newsrooms, journalism schools and numerous communications professionals nation-wide.

The reference book provides contextual information and standard practices for spelling and punctuating things such as place names, numbers, military ranks, titles, names of organizations and, in this case, words representing Indigenous groups.