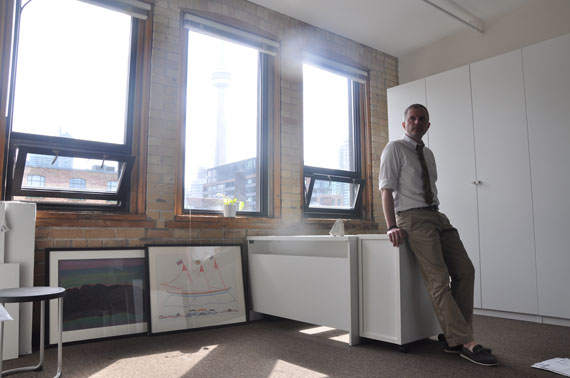 The IAF’s William Huffman is based at the foundation’s new headquarters in downtown Toronto. (PHOTO BY SARAH ROGERS) 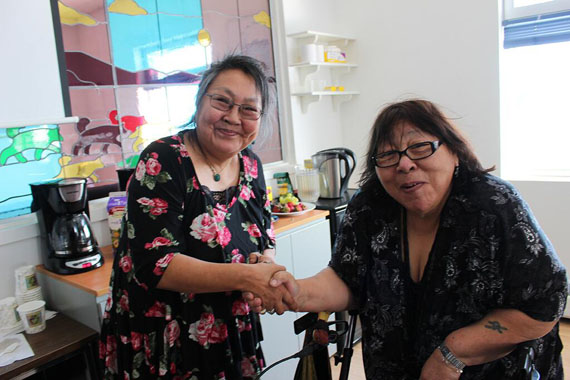 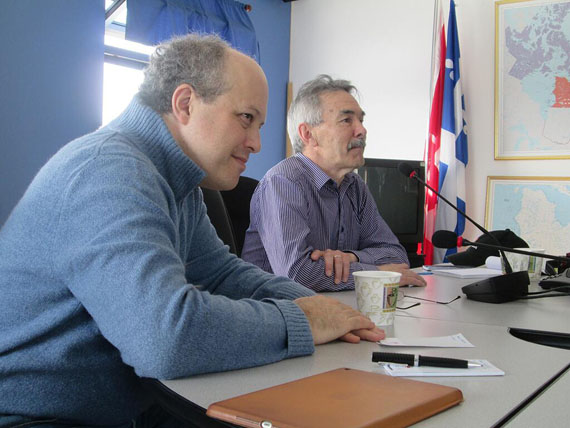 Barry Appleton, left, chair of the Inuit Art Foundation’s board of directors, leads a consultation with artists in Kuujjuaq April 17 alongside foundation president Jimmy Manning, right. (PHOTO COURTEST OF IAF)

TORONTO — Artists across Inuit Nunangat say they continue to face challenges that include finding tools and space to create, as well as accessing markets to sell their work.

That’s what a 13-stop, 18-month-long consultation process led by the Inuit Art Foundation found, when staff and board members from the revived organization visited Inuit communities, north and south, to learn how to better serve them.

“We left with a clear understanding that there aren’t enough workshops and training for visual and performing artists across the North,” said William Huffman, the IAF’s acting director of development and stakeholder relations.

“And the smaller communities are clearly challenged by access to materials, like stone and tools, which are expensive to bring in.”

The foundation just wrapped up the tour, which travelled to communities in each of the four Inuit regions, as well as to a handful of southern cities.

“Really it was to get back in the face of key stakeholders and let them know that we’re back in business,” Huffman said. “But equally important was the feedback.”

One of the last stops on that tour was Kuujjuaq, where IAF staff and board members met with members of the local Sananguatiit (visual artists) association.

And one of their biggest problems is finding studio space, said Sammy Kudluk, who works as an arts liaison with Makivik Corp.

Artists also struggle to gain access to arts funding because there are too many disconnected sources and few of these are consistent, he said.

“It was really good for the IAF to finally come to Nunavik,” said Kudluk, who also serves as vice-president to the foundation’s board of directors. “It gives them a sense of what do and the kinds of problems we have.

“And I think the IAF can play a role in helping.”

The foundation is now trying to rebuild itself as Canada’s champion of Inuit art, two years after its abrupt closure left many unsure of its future.

The IAF closed its doors in February 2012 after a federal evaluation recommended that Aboriginal Affairs and Northern Development — one of the foundation’s main funders — take a second look at IAF’s role and funding.

That evaluation gave the foundation, then based in Ottawa, a mixed review, noting its capacity and outreach were limited and difficult to measure.

But letters of support spurred a revival in December 2012, with a new board of directors led by president Jimmy Manning, retired manager of Kinngait Studios in Cape Dorset.

The organization is now moving to expand its reach, by tapping into a younger generation of visual and performing artists and showing Inuit art to a larger, more international audience.

“Every responsible organization needs to adapt and to change year to year,” said Huffman, who came to the IAF last November from the Canada Council for the Arts. “It was a big surprise to everyone that the organization was about to fold.

“So we’re trying to be very transparent as we move forward.”

Thousands of kilometres away from the North’s outdoor carving studios, sewing centres and community halls, Huffman sits among scattered furniture and framed prints in an office in downtown Toronto, where the foundation’s new headquarters are coming to life.

The IAF plans to maintain its long-time Ottawa office, but this new third-floor space on a trendy stretch of King St. W. is the organization’s new base to leverage wider interest in Inuit art.

“Ultimately, we need a whole lot of partnership to move forward,” Huffman said. “So it made of sense have a presence in Toronto.”

As for partnerships, Huffman hopes to network with galleries and arts organizations and drum up private sector support to top up the IAF’s core funding.

With hopes of new and increased support, Huffman said the IAF is already eyeing the first-ever Inuit art pavilion at the 2015 Venice Biennale, a major international art showcase, as well as involvement in Paris Fashion Week.

“Inuit art should be high profile,” he said. “There’s something incredibly Canadian about this, and it has an economic spinoff for the whole country.”

From his perspective in Kuujjuaq, Kudluk hopes to see the IAF set up office in the North eventually.

But for now he thinks the foundation’s new Toronto office will give artists better exposure.

“It’s a big step, but I think it will be an improvement,” he said.