“When a person comes out and is using a long rifle, officers are a very easy target” 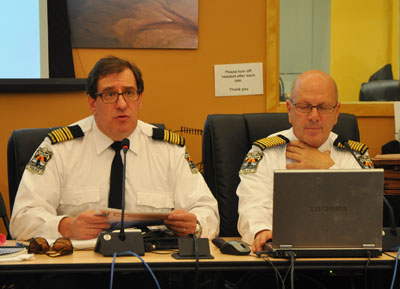 When police respond to calls involving “active shooters,” who are often barricaded inside a home, Martin says an officer positioned outside may not be able to return fire with their pistol.

But this plan drew questions from Kativik Regional Government councillors, meeting in Kuujjuaq this week, who said they are concerned about Nunavimmiut who have been shot and killed during altercations with police.

“Our role is to serve and protect,” Martin told KRG councillors Nov. 26.

“Because the people themselves are hunters and use rifles to hunt, this is the type of weapon we see, while police officers are under-armed.”

KRPF officers currently carry pistols, but those guns have a short range of fire, Martin said.

The KRPF’s first task, when called to respond to a situation involving an armed person threatening violence, is to secure the area, Martin said, which means evacuating other people in the home or vicinity.

“When a person comes out and is using a long rifle, [police officers are] a very easy target — we need distance and time. The farther away they are, the less of a target they are,” Martin said.

“And if that suspect starts shooting, he will need to be neutralized.”

Earlier this month, for example, KRPF officers responded to an armed man in an Inukjuak home.

Video footage showed the young man coming out on the front porch, shouting and pointing his firearm, while Inukjuamiut watched from the road.

At one point after the suspect pointed his firearm, an officer positioned outside the home fired and hit the gunman in the lower body. The suspect survived the shooting.

It’s not clear if the officer was using a rifle or a pistol: the KRPF hasn’t indicated if officers are already equipped with the new weapons.

Martin noted that it’s the force’s duty to ensure its officers are prepared to respond to situations, including those that include active shooters.

He pointed to the 2014 shooting in Moncton, N.B., when a lone gunman killed four RCMP officers.

The RCMP are now facing charges under Canada’s Labour Code, related to the provision of equipment and training of its officers.

“I hear this question a lot: Why don’t we use taser guns, pepper spray or other tools?” Martin told regional councillors.

“Tasers can be very useful, but you have to be close. Pepper spray too — you need to be very close. And when you have a person with a rifle facing you, you don’t want to be close.”

Councillors also had questions about police accountability in cases where Nunavimmiut are shot or even killed by officers.

As required under Quebec law, any time citizens are injured or killed as part of a police intervention, an outside force must investigate the incident.

Those investigations are then handled by the province’s justice system, Martin explained; the Crown must determine if there was any wrongdoing on the part of police.

But Martin noted that the Quebec government plans to appoint a special third-party unit to investigate police incident, so the method used to handle these cases is about to change.

That’s in light of a major investigation into the conduct of eight Sûreté du Québec officers in Val d’Or who have been suspended amid allegations of sexual assault and other abuses of power against Indigenous women in the region.