About 155 in territorial jails, another 60 in federal penitentiaries 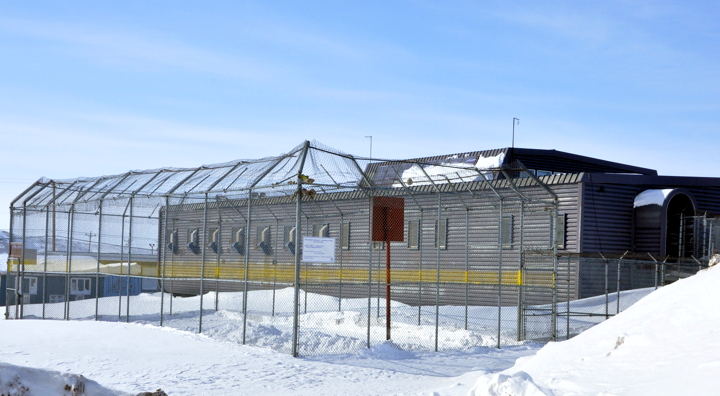 The Baffin Correctional Centre and the Makigiarvik Centre house the majority of inmates in Nunavut’s correctional system. (FILE PHOTO)

About 200 Nunavut men, women and youth sit inside territorial and federal institutions, according to written information shared May 24 at the Nunavut legislature, now in its spring sitting.

On March 1 of this year, 155 Nunavummiut were held at territorial correctional facilities in Nunavut, with 91 at the Baffin Correctional Centre and Makigiarvik Centre in Iqaluit.

Of the 91 in Iqaluit, 31 were sentenced offenders and 60 were being held in remand, awaiting trial.

Those numbers are from Nunavut’s Justice Department, and provided by its minister, Jeannie Ehalok, who tabled a response to a written question that Baker Lake MLA Simon Mikkungwak asked last March about correctional facilities and programming.

In her written response, Ehalok said that on March 1, there were 36 inmates at the Rankin Inlet Healing Facility, and four at Kugluktuk’s Ilvaut Centre.

Of those Rankin inmates, 25 were convicted offenders and 11 were remand inmates. At the Ilavaut Centre, zero inmates were doing remand time.

Three inmates were at the young offenders centre, with one of the three doing remand time.

The Uttaqivik Community Resident Centre held 12 inmates, none of them on remand time, a Department of Justice spokesperson said in an email.

At the Nunavut Women’s Correctional Centre, two were doing remand time and seven were sentenced inmates, the Justice spokesperson said.

The average amount of time the inmates had spent in remand—that is, the time they spent in jail while awaiting trial or because they broke undertaking conditions—had reached an average of nearly two years for women on March 1, Ehaloak said.

It noted the average amount of time that men spent in remand at a territorial facility was about 130 days, but for women that number stood at 648 days.

However, “the small size of Nunavut’s correction population results in these figures increasing and decreasing significantly over time,” Ehaloak’s response said.

How many of those in jail were repeat visitors to territorial corrections facilities is unclear because “Nunavut corrections does not currently have a measure for tracking recidivism,” she said.

Unrelated to her response to Mikkungwak’s written question, Ehaloak said last week in the Nunavut legislature that 60 Nunavummiut are now held at federal corrections facilities.

Compared with all other provinces and territories, Nunavut has the highest proportion of residents housed in correctional facilities—more than six times the national average, Statistics Canada said in 2017.

In 2015-16, Nunavut paid about $36 million for its correctional services. Based on Nunavut’s population, that’s about $1,007 per capita that year, compared with the national average of $128 per capita.

An earlier version of this story contained incorrect information about the status and number of inmates at the Uttaqivik Community Resident Centre and the Nunavut Women’s Correctional Centre.