Saami in Sweden seek support for protest against iron mine 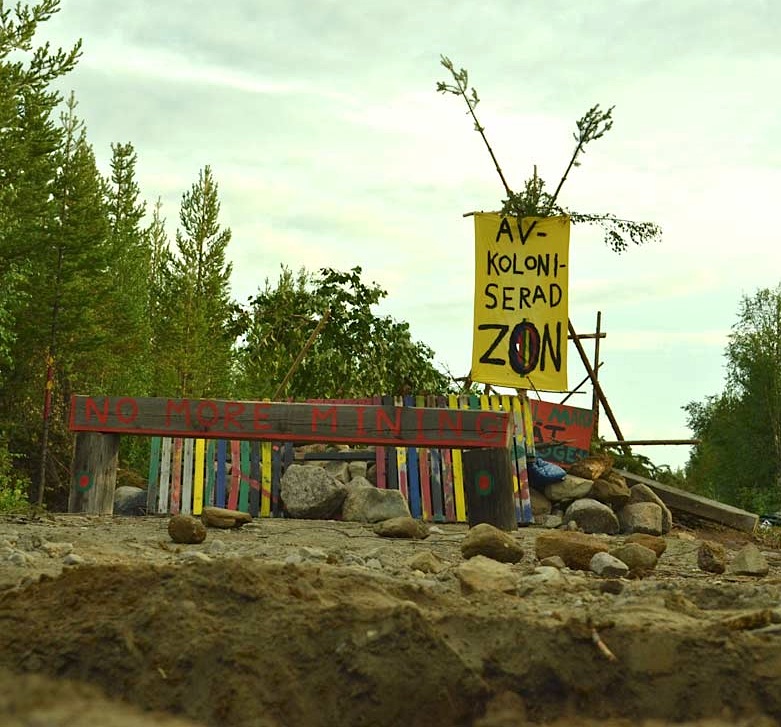 A look at the blockade erected in northern Sweden, where Saami are protesting against an iron mine project, which reads “No more mining,” among its painted messages. (PHOTO COURTESY OF KOLONIEMA.SE)

Saami in Arctic Sweden say they’ll continue to blockade a mining access road throughout this coming winter in an attempt to stop plans for a large iron mine from moving ahead — a comment made before police moved in Aug. 12 to break down a barricade and remove activists chained with pipes stuck in the ground, the second police intervention in two weeks.

The Swedish Saami region of Sápmi — the large homeland of indigenous Saami people that spreads across Norway, Sweden, Finland and Russia — has already been “exploited and colonized by the Swedish state and corporations for generations,” says a blog about the blockade.

Now an entirely new area is “under attack from the mining industry,” the bloggers say.

Since July, Saami have been preventing workers from Beowulf Mining PLC and its Swedish subsidiary, Jokkmokk Iron Mines AB, to continue their drilling and exploration project in Gállok, not far from Jokkmokk, a town of 3,000 located just above the Arctic Circle.

According to information on Beowulf’s mining site, the mine project area is thought to hold more than 100 million tonnes of high-grade iron ore.

To power a future mine in Gállok, known as Kallak in Swedish, the company could turn to a major hydroelectric complex located only a few kilometres away.

On July 29, Swedish police first came. They tore down the blockade and arrested six people.

The Saami Parliament said in a news release about this incident that “the police used a lot of unnecessary force, dragging the activists along the ground. The activists were passive and did not resist.”

“The same night the blockade was raised again, with improvements, to the company’s great disappointment,” note the bloggers who say they to stay there during the winter.

Photos from Aug. 12 posted on the Swedish Radio website appear to show that the blockade has now been brought down again.

There are many reasons to resist an iron mine in Gállok, they say:

• maintaining solidarity with a people who have, for centuries, been oppressed and colonized by the state;

• “Defending the landscape, the animals, beings and the future! Gállok is a very beautiful place, with cloudberries, blueberries, reindeer and the small lake Gállokjávrre which is full of fish and so clean we drink the water from it. It’s surrounded by swamps and an old-growth forest with many of the species extinct in other places;”

• local resistance to the mine in Gállok; and,

• protection of the countryside: “civilization and economies have clearcut forests, built dams in the rivers and when nothing is left to live from the mining industry comes like ‘saviours.’ They offer work opportunities that only lasts a couple of years and sacrifices the last sustainable livelihoods before they leave an even more devastated landscape behind. + mines always releases toxins in the water and air.”

“It’s better for the company to abandon this project immediately in order to avoid additional costs and stress among the reindeer herders,” said Mattias Åhrén, lawyer for the human rights unit of Saami Council, in a Saami Council news release.

“We will assist the Saami communities to raise this case at the international level, unless the mining plans are scrapped.”