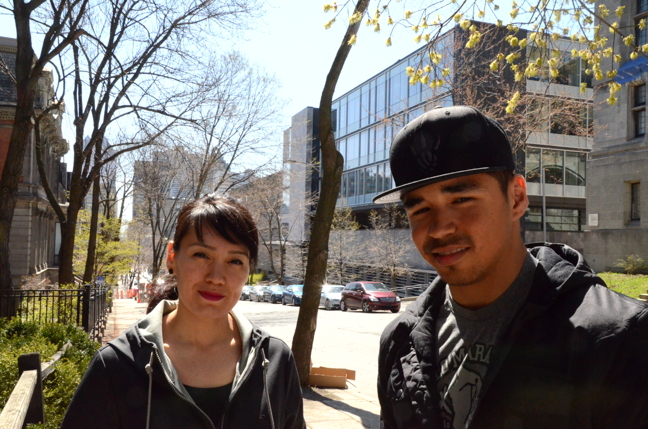 Beatrice Deer and Larry Thomassiah in downtown Montreal May 6, a day after Thomassiah recorded his winning song ‘Be Happy’ at Hotel2Tango studio. (PHOTO BY DAVID MURPHY) 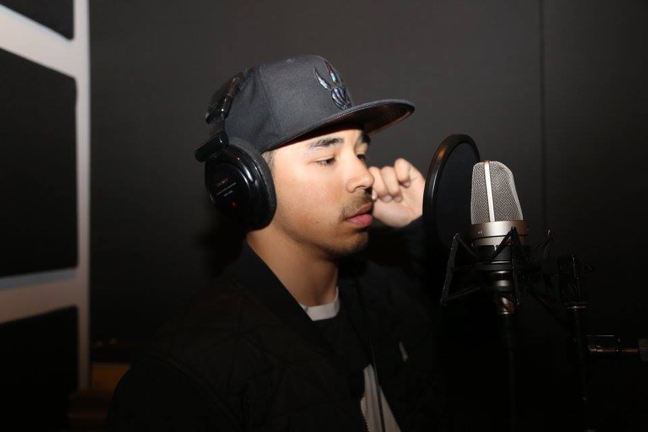 Thomassiah, or Larry T, records his song at Hotel2Tango in Montreal May 5. (PHOTO COURTESY OF MAKIVIK MAGAZINE)

MONTREAL — Larry Thomassiah started rapping five years ago, but he’s never worked as hard on such a big project before.

The 18-year-old saw a poster at Ikusik high school in Salluit earlier this year about the Esuma and Aumaaggiivik song competition and thought he’d give it a shot.

It’s a good thing he did. The kid won himself $1,000, a free trip to Montreal and studio time to record his winning song at Hotel2Tango, where bands like Arcade Fire and Sam Roberts have recorded.

Thomassiah won the competition with his song ‘Be Happy.’

“The whole song’s really about encouraging the listeners to be more thankful and try to be happy,” Thomassiah said.

That’s exactly the type of positive message Beatrice Deer, the contest co-ordinator, was looking for.

“We wanted to encourage songwriters, Nunavik songwriters of all ages, to write songs about perseverance. About not giving up,” Deer said.

There were 13 entries in the competition. But Deer said Thomassiah ticked all the right boxes: Applicants had to be a beneficiary of the James Bay and Northern Quebec Agreement, and 50 per cent of the song had to be in Inuktitut — with a positive message.

“Nunavik is going through a bit of a difficult time at the moment with all the social issues and the suicides. We just wanted to promote perseverance and healthy living and encourage people to persevere,” Deer said.

“We all go through hardship but when we persevere we got past that. And we just wanted to highlight that,” she said.

Thomassiah has the look and sound of a rapper. He wears the requisite flat-brimmed Toronto Raptors hat and speaks in a raspy voice, much like one would expect from American rappers 50 Cent or DMX.

But his voice dips a notch lower still when he speaks about the hardships Nunavik teens face.

“I think the song kind of goes to the people who think about suicide. That’s very often up in the North because of the housing crisis, all the drugs, family problems — the teenagers usually start thinking about suicide,” he said.

Thomassiah said “at least” 90 per cent of the teenage population have thought about suicide.

But the young artist said he’s found ways to escape when those dark thoughts invade his mind.

“Sometimes I have. Usually when I have some problems, I usually escape them by listening to music or by exercising. Going to work, going to school,” he said.

The chorus in Thomassiah’s song tries to broadcast that message of hope and gratitude:

Let’s be happy that we woke up today,

That we opened our eyes and we are okay,

Kneel down and pray,

Make sure you thank God for this day.

“In the society there are a lot of teenagers who aren’t thankful for what they got. Like even if their parents would buy them a car, it’s not exactly the one they wanted, they would complain about that,” Thomassiah said.

“Instead of doing that you gotta be thankful. You are alive. You opened your eyes today. You woke up.”

Well-known Montreal rapper Socalled helped record his song in studio, and he’ll do the mixing and mastering for it too. Beatrice Deer also helped with vocals and some throat singing.

Thomassiah’s favourite rapper is Drake but according to Deer, Socalled told him, “Drake’s going to be jealous” when Thomassiah’s song comes out.

Thomassiah said the $1,000 he won is going towards hunting gear and helping his family.

The full release of Thomassiah’s song, as well as a music video, comes out June 21 on Aboriginal Day.

For a full interview with Beatrice Deer and Larry Thomassiah in Inuktitut, listen to the upcoming May 17 episode of Nipivut, Montreal’s Inuit radio program.