Researchers from Canada, the United States, Europe and Korea want to drill a series of wells from the Mackenzie Delta across the Beaufort Sea 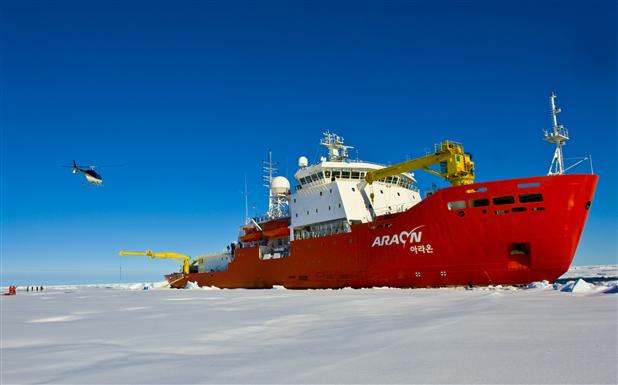 South Korea’s polar research vessel and icebreaker, the Aaron, will cruise in to Canadian waters in 2013 to help scientists select drilling sites in the Beaufort Sea. It is shown here in the Chukchi Sea between Siberia and Alaska in 2011. (PHOTO BY YOUNG KEUN JIN/ KOREAN POLAR INSTITUTE)

The oil and gas industry may be eyeing the energy riches under the Arctic Ocean, but scientists are even keener to start drilling in Canada’s polar waters.

They say the Beaufort Sea, in the western Canadian Arctic, holds clues to several environmental mysteries of global significance — chief among them why so much methane, a potent greenhouse gas, is now seeping out of the sea floor.

An international team is proposing an ambitious drilling program to extract some answers. Researchers from Canada, the United States, Europe and Korea want to drill a series of wells from the Mackenzie Delta across the Beaufort Sea.

If approved, drilling could begin as early as 2015, the first holes bored into the Canadian Arctic in years.

The Integrated Ocean Drilling Program, an international outfit that dispatches research ships around the world, has reviewed the preliminary plan and recently asked the scientists to submit a full proposal, says Anne de Vernal, at the Université du Quebec à Montréal, chair of the committee overseeing Canada’s involvement with IODP.

She and her colleagues say the Beaufort is the best place in the Arctic to assess the stability of undersea permafrost and gas deposits and to fill in big gaps in climate science.

They want to drill down through sediments that have rained onto the sea floor over eons, revealing how the Arctic ice has waxed and waned, and into the thick slabs of permafrost and frozen gas beneath the sea floor that have the potential to accelerate global warming.

The shallow waters that fringe the Arctic are among the most dynamic and understudied part of the world’s oceans, says geologist Scott Dallimore, at Natural Resources Canada, co-leader of the planned project. The waters cover continental shelves that run more than three million square kilometres along the north coasts of North America and Siberia, or 30 per cent of the Arctic Ocean.

Permafrost hundreds of metres thick occurs on the shelves, and has been slowly warming since the end of the last ice age.

As the slabs of permafrost warm, they can destabilize the sea bed, generating underwater landslides that send sediments barrelling down from the continental shelf into the deep ocean.

One landslide, discovered by Natural Resources Canada scientists in the Beaufort, left more than 200 square kilometres of sediments strewn across the deep sea floor.

More worrisome to many observers is the massive store of methane sitting beneath the permafrost in the form of gas hydrates.

The gas has been trapped under the sea for thousands of years, but there is mounting concern — and evidence — that it is leaking out as the climate warms.

In the last few years, dramatic plumes of the methane have been spotted by teams surveying waters off Siberia. A Canada-U.S. team has also found “extensive free gas release” on the Beaufort Shelf, which is pockmarked with holes the escaping gas leaves behind.

At one spot about 50 metres below the surface, the team’s remotely operated vehicle found gas “vigorously and continuously” bubbling out of a sea mound, kicking up clouds of sediments.

The chemical signature of the gas seeping out from the Beaufort sea floor indicates much of it is bubbling up through cracks and gaps in the permafrost, liberating methane that has been locked under the sea for at least 50,000 years, Dallimore and his colleagues report.

How much methane is entering the atmosphere, and whether the rate is increasing as Arctic ice retreats and the climate warms, is not known. But scientists say it is important to find out because methane is 20 times more potent as a greenhouse gas than carbon dioxide is..

The sediments could also reveal how polar ice has come and gone over the ages, and help scientists refine predictions of how the Arctic, and global climate, might behave in future.

“We do not know when the pack ice developed in the Arctic Ocean,” says de Vernal, who notes the Beaufort is the “perfect” place to find out.

“This is one of the rare places in the Arctic where the answer is there,” she says. “We know it is there, but we have to drill and drill at the right place.”

This fall, Natural Resources Canada’s Scott Dallimore plans to head to the Beaufort with U.S. and Korean scientists to start surveying for drill sites. They intend to return in 2013 with Korea’s state-of-the-art icebreaker, the Aaron, to complete the survey.

The detailed project plan will then be submitted and reviewed by the international drilling programs, which are funded by governments around the world, and the researchers hope drilling can start in 2015.

De Vernal is confident the project will eventually proceed.

“It will go ahead,” she says, noting that “scientists are stubborn” and will keep pushing until they get the green light.

The international drilling programs would pick up most of the cost, expected to be close to $15 million, but the researchers are game to collaborate with industry.