Scientists “in shock” after Canada’s premiere icebreaker docked for repairs 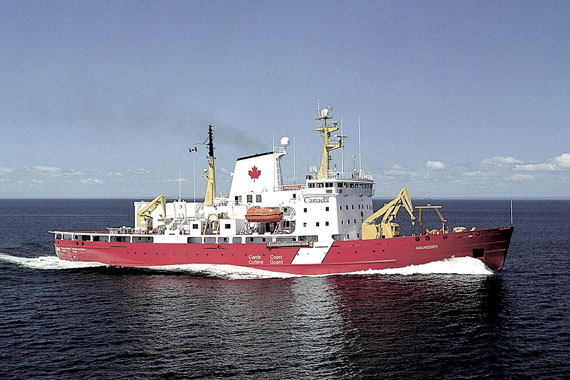 The cancellation of the 2012 Amundsen expedition comes just months after ArcticNet researchers won a $67.3-million infusion from the federal government to step up northern research.(FILE PHOTO)

The icebreaker at the heart of Canada’s premier Arctic science program has been pulled from service, leaving researchers scrambling to find other ships to take them to the North.

The bright red Canadian Coast Guard icebreaker Amundsen has become a familiar sight cruising the Arctic. It is a floating home and laboratory for researchers and students studying everything from Inuit health to the transformation underway in the Arctic environment. The ship is also to be featured on Canada’s new $50 bill.

But it is now docked in Trois-Rivieres, Que., with four of its six engines “non-operational,” and in need of repairs expected to cost several million dollars and take at least a year.

“Numerous repair scenarios are now being considered, but in all cases, the ship will be non-operational until late 2012 or early 2013,” Martin Fortier, executive director of ArcticNet, said in a memo recently sent to scientists who planned to use the ship this year.

“This leaves us with no other option than to cancel the 2012 Amundsen expedition altogether, obviously a major blow to the 2012 ArcticNet ocean program and associated research projects,” it says. ArcticNet, based at Laval University, co-ordinates and funds Arctic work undertaken by researchers across Canada.

Keith Levesque, ArcticNet’s co-ordinator for research on the Amundsen, says the engine problems “came out of the blue.”

A routine coast guard inspection in December uncovered cracks in four of the ship’s six engine blocks, he said in an interview. Transport Canada inspectors took a look and in January, “deemed that the ship could not sail this summer, or even this winter, and that the engines need to be replaced as soon as possible.”

Nathalie Letendre, a media officer with the Coast Guard, says the Amundsen will not even been used to clear ice in the Gulf of St. Lawrence, which it usually does in the winter months. It is not know how expensive or extensive the repairs job will be, she said, but the ship is expected to be out of action for the year.

The cancellation of the 2012 Amundsen expedition comes just months after ArcticNet researchers won a $67.3-million infusion from the federal government to step up northern research.

“We are still in shock,” says John Hughes Clarke, at the University of New Brunswick, who leads an ArcticNet project mapping the seabed.

“She is Canada’s premiere research vessel, the equipment she has is amazing,” says Hughes Clark. “But, she was built in 1978.”

The Amundsen has been working almost flat-out since 2003 when the ship was reborn as Canada’s “state-of-the-art” research vessel. It has cruised through the Arctic for the past eight summers, and overwintered twice.

The Canadian Coast Guard decommissioned the ship in 2000, but scientists convinced the federal government to spend more than $30 million on a retrofit. It added laboratories and a “moon pool” for lowering scientific instruments from inside the hull without cutting a hole in the ice.

Costly mapping equipment is also bolted onto the Amundsen and would need to be “surgically removed” to move it to another ship, says Hughes Clarke.

He says there is a possibility his team will be able to do some mapping this summer using more portable equipment. “I am looking to see if we can partner with smaller vessels in the western and eastern Arctic,” says Hughes Clarke.

Levesque also is working to get some of the researchers and their gear onto other vessels.

He says a coast guard icebreaker, CCGS Laurier that sails out of Victoria, will take over this year’s servicing of ArcticNet scientific gear moored at four spots in the southern Beaufort Sea. The instruments are suspended up to 700 metres in the water column and measure everything from temperature to how much plankton is falling to the sea floor.

Another coast guard vessel is being lined up to take care of another set of instruments in Hudson Bay.

But there will be “major impacts for many projects, researchers and students in 2012-2013,” Fortier told the scientists.

The Amundsen’s engine woes come on the heals of last fall’s problems with the 43-year-old CCGS Louis S. St-Laurent, the workhouse of the coast guard’s Arctic fleet. It was marooned in the water off the Nunavut coast for weeks last fall because of a loose propeller nut. The new $720-million CCGS John G. Diefenbaker icebreaker, to be built in Vancouver, is due to replace the St-Laurent in 2017.

Pulling the Amundsen out of service this year was unexpected, but Levesque says it was known the engines eventually would have to be replaced. One of the Amundsen’s sister ships had all its engines replaced in 2009 as part of retrofit that cost $9.5 million.