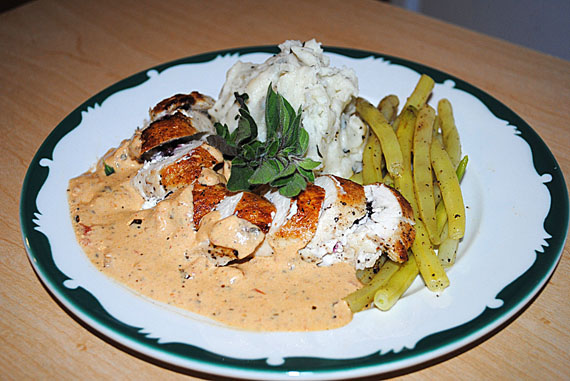 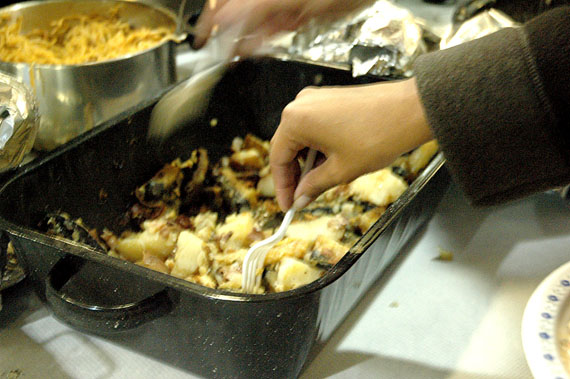 Kangiqsujuammiut enjoy fried mattaq at a community celebration in 2009, shortly after local hunters caught a bowhead. Resident Yaaka Jaaka shares his own recipe for fried mattaq below. (PHOTO BY SARAH ROGERS)

What sort of goodies will fill your table over the holiday season?

Nunatsiaq News asked some chefs and hunters what they plan to serve up for family over the Christmas holidays, and three of them agreed to share their family recipes.

But the Iqaluit man, who worked as a chef in Ontario for many years, always puts a special effort into preparing Christmas dinner.

With a culinary background, Watson appreciates the traditional Christmas fare — like turkey and all the fixings — but he also likes to experiment with new dishes.

The recipe he shared with Nunatsiaq News is one suited to a smaller dinner party, but impressive by its name alone: Chicken Roulade with Goat’s Cheese and Cranberries, Oregano Mashed Potatoes, Yellow Beans and Sundried Tomato Cream Sauce.

“Two years ago when it was just my wife, myself, and our two toddlers for dinner I thought up this quick dish. We weren’t up for cooking an entire turkey that year and chicken was an excellent choice.

“I recommend it as a dish for a small Christmas dinner party (four to six people). The recipe as presented is meant for four people but if you increase the ingredient content accordingly, it would be suitable for up to a party of six-eight guests.

Goat’s Cheese Mixture: Mix goat’s cheese with cranberries in a mixing bowl. Season to taste with salt and pepper.

Tip: If using dried cranberries rehydrate them in advance with water.

Chicken:
• Take each breast and place on cutting board with plastic wrap on either side of breast.
• Use a mallet to pound the breast into nice flat thick pieces, less than a half an inch thick.
• When all the breasts are flattened, remove wrap from each piece.
• Stuff each breast with a line of goat’s cheese mixture through the centre of breast, about 1 inch thick.
• Carefully roll each breast in a tube shape with all the filling inside.
• Tip: If you find the rolls to be unstable, tie them with butcher’s twine as you would a roast.

Sauce:
• Coarsely chop sundried tomatoes.
• Bring 350 mL to 400 mL of 35 per cent cream to a boil as soon as it bubbles reduce to low to simmer.
• Add tomatoes to cream.
• Add 2 tbsp of butter.
• Season to taste with salt and pepper.
• Let reduce for about 4-5 minutes (or until thickened) stirring frequently with whisk.
• Set aside to cool.

Potatoes:
• Coarsely chop a handful of fresh oregano (leaves picked off stems.)
• Peel and boil potatoes.
• When cooked strain potatoes.
• Combine 100 mL of 35 per cent cream and 3 tbsp of butter in pan.
• Quickly cream/butter to boil (bubbling) stirring with whisk, turn off and remove from heat.
• Add butter/cream mixture to potatoes.
• Add fresh chopped oregano to potatoes or substitute 2 tbsp of dried oregano.

Mash potatoes.
Season with salt and pepper to taste.
Tip: With the butter/cream mixture add as needed as you don’t want your potatoes to be whipped.
If you use a food mill (ricer) instead of a mashing utensil your potatoes will be light and fluffy with no ‘chunks’.

Beans:
• Wash beans and cut off tips.
• Boil until brilliant yellow.
• Strain.
• Add 1-2 tbsp of butter.
• Season with salt and pepper to taste.

Chicken (Part 2)
Note: In an oven safe frying pan, sear the chicken and put the pan in the oven.

• If you don’t have an oven safe frying pan sear the chicken in a frying pan and transfer to an oven safe pan to put in the oven.
• Heat frying pan.
• Once hot put in 1 tbsp of cooking oil.
• Sear chicken on the side of chicken where there is no separation of the piece of meat (show side).
• Do not shake the pan while searing.
• When chicken is browned on that side flip chicken and put pan into a 350 degree oven

or
• Transfer flipped chicken onto an oven-safe pan into a 350 degree oven.
• Remove from oven after 10-15 min. or when cooked as oven temperatures may vary.

After chicken is out of the oven and resting on the cutting board have the other parts of the meal warmed and ready to serve.

Place potatoes and beans on each plate first.

Cut chicken on a slight angle and fan the chicken slices around the potatoes showing the ‘stuffing.’

Ladle sauce over bottom half of chicken.

Garnish with a sprig of oregano if available.

If your holiday celebrations are filled with country foods, this recipe is for you.

Yaaka Jaaka, from Kangiqsujuaq, likes to fry up mattaq for his family and friends over the holidays.

It’s a good recipe for preparing old mattaq that is no longer fresh enough to eat raw, he said.

And it’s also ideal for elders: the preparation makes it easier for denture wearers to chew.

Jaaka said you can use different kinds of mattaq, including bowhead, beluga or narwhal.

• Thaw and cut a large chunk of mattaq into one inch strips.

• Remove the bacon and onions and keep half of the grease.

• Prepare a mixture of flour, garlic and any other spices which you like.

• Coat the mattaq strips in the mixture until well covered.

• Remove from heat and draw off excess grease.

• Par boil small potatoes until a fork can go through them easily, but do not over cook.

• Mix the mattaq, onions, bacon and potatoes in barbecue sauce until all ingredients are well covered.

• Transfer mixture to a baking dish and bake at 350 degrees for about an hour and a half or until the mattaq is tender.

The fried/baked mattaq may be served as an entree or as a main meal with a side salad.

Turkey: the holiday bird is among the most popular fixtures at North American tables.

And it’s no less popular for Cambridge Bay chef Andy Poisson this time of year.

The recipe that Poisson shared with Nunatsiaq News is a turkey dressing, or stuffing recipe, passed down from his father.

The unique addition of potatoes and bacon in the stuffing makes it a traditional French style dressing, Poisson said.

Now Poisson has passed the recipe along to a new generation of cooks who take part in the camp cook program at Nunavut Arctic College’s Kitikmeot campus, where he works as an instructor.

This past October, Poisson’s students cooked up a lunch buffet over three weeks for visitors to the community learning centre. One of their meals was a traditional turkey dinner.

The stuffing recipe was a hit and will likely show up on a few local Christmas dinner tables over the holidays, Poisson said.

But not all local families eat turkey for the holidays, Poisson said, because of how pricey the prized Christmas bird can be by the time it reaches Arctic grocery shelves.

A 12-15 pound turkey can sell for up to $70 in Cambridge Bay, making it inaccessible to many.

Instead, many local families opt for wild food from the land, Poisson said — especially caribou and muskox.

• Cut bacon into bite size pieces, dice onions. Place in a frying pan and cook till the onions are clear in color.

• Break bread into bite size pieces in a large bowl while bacon and onion are cooking.

• Peel and cut potatoes (large cube) into a pot, cook till they are ¾ of the way cooked.

• When the bacon and onion mixture are cooked (onions are clear in color) add juice and all to the bread.

• When potatoes are about three-quarters of the way cooked (just about the point of breaking with a fork) remove some of the potato water to the bread mixture till the mixture is moist, if add to much potato water readjust with bread crumbs. Strain the remaining water, add potatoes to bread mixture.

• Remove from oven and let stand for 30 minutes before serving. 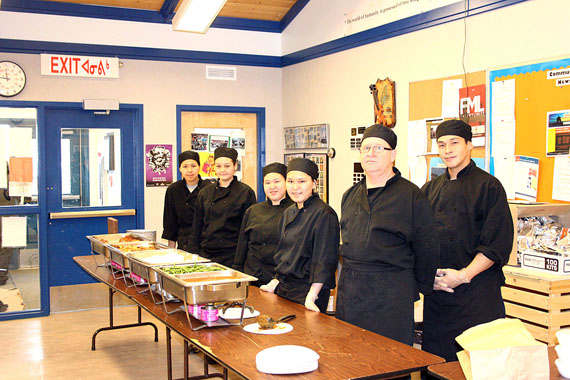 Chef and cooking instructor Andy Poisson, second from left, stands behind a lunch buffet prepared by students from his camp cook program at Nunavut Arctic College’s Kitikmeot campus in Cambridge Bay. In October, students prepared a lunch buffet for visitors to the community learning centre, including a traditional turkey dinner. (PHOTO COURTESY OF ANDY POISSON)