“Inuit from Chukotka to Greenland” will participate in study 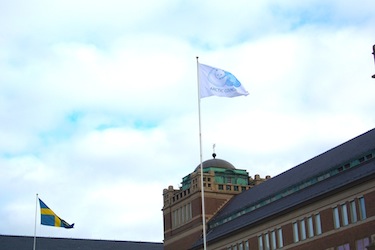 The Swedish flag flies alongside the Arctic Council flag this week in Stockholm, Sweden, where a meeting of senior Arctic officials and permanent indigenous participants was taking place. (PHOTO COURTESY OF ICC)

The Inuit Circumpolar Council received some good news this past week in Stockholm, Sweden, during a meeting of top officials from the Arctic Council’s eight member nations and its indigenous Arctic participants.

The ICC learned that its “Sea ice is our highway” project will move ahead as an official Arctic Council project.

This project, funded by Canada, the United States and Denmark, will look at how changes in the Arctic have affected Inuit and how Inuit are adapting to these changes. And it will include interviews “with as many Inuit from Chukotka to Greenland as we can within the budget,” said ICC-Canada’s president Duane Smith in an interview from Stockholm.

The ICC project’s approval helps meet the call from the permanent participants, like ICC and the Sami Council, for the inclusion of more indigenous knowledge in the Arctic Council’s work.

Smith said that Arctic Council member nations haven’t been ready to support projects which would ensure this knowledge is properly collected.

At the Stockholm meeting, the Arctic Spatial Data Infrastructure project also came up for discussion. This project will lead to the creation of a map of the Arctic showing geography and other features, such as where there are living resources, like fish and wildlife, and environmentally senstive areas.

And that’s something that could prove useful and save precious time in the case of an environmental disaster response, Smith said.

Before the ministers of the Arctic Council member nations meet again in 2013, the council’s senior officials and various working groups will continue to:

• work on the assessment of the current state of human development in the Arctic and its relationship with climate change and “other factors” affecting Arctic communities;

• follow up on the Snow, Ice and Permafrost report released last May;

• look at ways to limit soot (which it calls black carbon) in the Arctic and support a global agreement to reduce mercury use in the emissions;

• complete its Arctic Ocean review project, that will look at existing global and regional measures for the Arctic marine environment, and an Arctic biodiversity assessment, with science and policy recommendations; and,

• start an Arctic change assessment, with an “Arctic Resilience” report.

Right now, Sweden chairs the council and looks after its administrative functions.

But by 2013, when Canada takes over the chair of the Arctic Council, the organization is likely to have set up a permanent secretariat in Tromsø, Norway.

• a mechanism to provide more input from environmental groups and industry; and,

Smith said that the Arctic Cuncil hopes to have that review finished before Canada takes over the chair in 2013.