“Like trying to find a needle in a haystack” 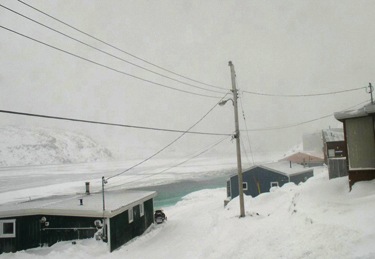 The community of Kimmirut is seen here in a Nov. 30 photo. A blizzard grounded an aircraft search for missing Mayor Jamesie Kottoo on Nov. 29, but an aerial search was to have resumed on the morning of Nov. 30, weather permitting. (PHOTO COURTESY OF KIMMIRUTWEATHER.COM)

Foul weather has hampered the search for Kimmirut’s Mayor Jamesie Kootoo, who went missing on the land Nov. 26 while on a hunting trip.

After the 67-year-old Kootoo didn’t come back from his one-day caribou hunt Nov. 26, the local search and rescue committee in Kimmirut started to look for him.

“He was last seen Saturday afternoon by another hunter out on the land but he was the only one not to come back,” said Pitsiula Michael, a member of Kimmirut’s search and rescue committee team. “We spotted tracks on Sunday but there was fresh snow falling and we couldn’t follow the trail anymore.”

A blizzard grounded aircraft on Nov. 29, but an aerial search was to have resumed on the morning of Nov. 30, weather permitting.

There he was having trouble with either his qamutik or sled, and told the hunting party he was travelling with that he would catch up later with them.

When asked about a person’s chances of survival after four nights out on the land, Akavak said that it all depends on age, experience and other factors.

“We don’t have a list of the supplies that he had with him, but the last few days have been mild,” Akavak said. “People have been found alive after five or six days and the longest one I have heard of was an elder in his late eighties who was found after 29 days.”

Kootoo also went missing on a hunting trip five years ago, when his snowmobile fell into a gully and he badly injured his pelvic bone.

“In that case searchers were able to locate Kootoo after a day and a half, but he was in a concentrated area. This time the area he is lost in is flat and in the open,” Akavak said. “This time of year with the limited light, the skidoo can look like a rock from a distance. It is almost like trying to find a needle in a haystack.”