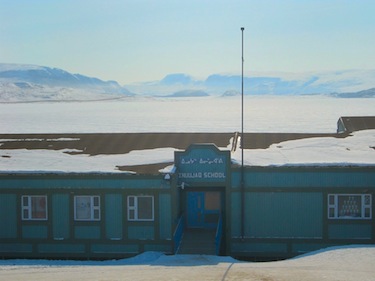 Providing security in Inuujaq School after-hours for the community library was a problem, according to the school principal. (PHOTO BY CLARE KINES)

When the Nanisivik lead-zinc mine closed in 2002, the nearby community of Arctic Bay received a present: hundreds of books from the mine’s library.

Today, the District of Education Authority in Arctic Bay, which looked after the community’s library, has decided it doesn’t want to run this library anymore.

That’s due to what its chairperson described as “problems,” mainly with providing security when the Ikpiarjuk library, located in Inuujuaq School, was open after school hours.

The decision to close the library in Arctic Bay means those books received from Nansivik, along with hundreds of newer ones, will either be boxed up and sent to another community willing to receive them or end up finding a new home somewhere in space-squeezed Arctic Bay.

Inuujaq School principal Adbus Salam told Nunatsiaq News that his school lacks space and could use the library’s space for an additional classroom.

There have also been some “security issues” with the operation of the library, he said.

The DEA decided to end its contract with the Nunavut Public Library services, which supports 11 libraries in Nunavut, March 31.

“It’s frustrating,” said Quttiktuq MLA Ron Elliott, who helped start the community library in Arctic Bay, but “the DEA has made the decision, and we have to respect their decision because they are elected officials within the community.”

Most only learned about the decision to close the library during an April 25 interagency meeting in Arctic Bay.

There, someone asked Salam “what’s happening with the library,” but the principal deferred that question to the chair of the DEA.

Qamayuq Oyukuluk then said the DEA had closed the library because of “problems,” but said the DEA hoped that the Hamlet or Nunavut Arctic College could take the books.

It turned out that the Nunavut Public Library Services had already emailed the hamlet, those at the meeting learned, saying NPLS employees would come to pack up the books and give them to a community that wanted a library.

The library was underused, Salam told Nunatsiaq News. Most people came to the library to watch television or use the computers, and it was “very rare” that they took out books.

That, and those “security issues,” meant the DEA didn’t want the additional responsibility of making sure someone would be present in the school library after hours.

After the community library books are taken away, the space will be used as a classroom, Salam said.

As for the school’s own library, its stock of books will remain there, he said.

Elliott hopes that’s not the end of the community library.

To him, the uncertainty over the future of the Arctic Bay library highlights the lack of infrastructure in Arctic Bay, where there is a lack of space for any community events.

The Nunavut Public Library Services now plans to give Arctic Bay a couple more months to find another location in the community of 825.

“I’m hoping that the positive outcome will be that we’ll end up with a library in a different location,” Elliott said.