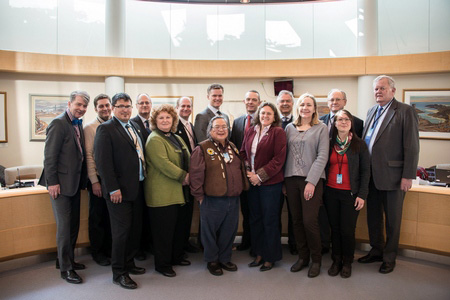 Senior Arctic officials of the Arctic Council met in Yellowknife March 26 and 27. (PHOTO BY ACS/LINNEA NORDSTROM)

Halfway through Canada’s chairmanship of the Arctic Council, its members say they’re making “good progress” on the council’s initiatives and have signed off on creating a new circumpolar economic council.

Senior Arctic officials wrapped up a two-day, closed-door meeting in Yellowknife March 27, their second since Canada assumed its two-year chairmanship.

As part of the meeting, delegations from the Arctic Council’s member states moved forward with the official creation of the Arctic Economic Council, a body it says will foster sustainable development, “including economic growth, environmental protection and social development in the Arctic Region,” said a March 26 release from Foreign Affairs Canada.

Arctic Council members first approved the initiative at a ministerial meeting in Kiruna, Sweden this past May, when Canada took over the council’s chairmanship.

And for the last seven months, an international task force has been charged with developing a business forum with representation from the Arctic Council’s eight member states.

Over time, the idea of a forum has given way to a more permanent council or advisory group that would report directly to the Arctic Council on circumpolar business and economic development issues.

The release notes that the economic council “may put forward proposals and reports to the Arctic Council to help inform its work.”

Arctic Council chair Leona Aglukkaq is expected to coordinate the economic council’s first meeting, although it’s unclear when that will happen.

During the Yellowknife meeting, officials signed off on a document called “Arctic Offshore Oil and Gas Guidelines,” a report that is meant to “provide targeted guidance” on protecting the marine environment from major spills and accidents.

Senior Arctic officials also approved a project proposal for an initiative called “Promoting traditional ways of live,” which will create a collection of best practices.

Although the Canadian government has expressed concern and criticism of Russia’s actions in Ukraine, those actions don’t appear to have affected Arctic relations between the two countries.

A spokesperson in Leona Aglukkaq’s office told The Canadian Press that Arctic Council work continues as planned, including the participation of a Russian delegation at the Yellowknife meeting.

The Arctic Council includes representatives from the eight Arctic states and six indigenous permanent participant organizations, like the Inuit Circumpolar Council, together with observers from a number of countries and organizations.