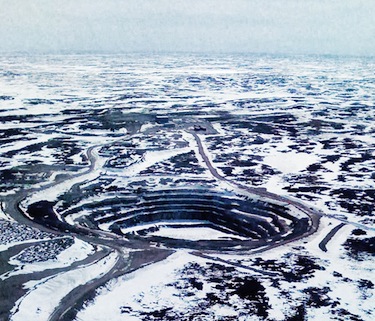 The Jericho mine in western Nunavut had started to produce diamonds again from stockpiles of rock left at the mine site, shown here. (FILE PHOTO)

A bold plan to revive Nunavut’s Jericho diamond mine, which last operated from 2006 to 2008, has stalled just months after production restarted at the mine.

Shear Diamonds Ltd. said Sept. 4 that it has suspended looking for diamonds in its high-grade stockpiles “as a result of continuing weak world diamond prices,” which have dropped from $232 per carat in September 2011 to $218 this September.

Until prices improve, Shear said it will look at the diamond resources at Jericho’s pit and on other properties located close to Jericho, which lies about 350 kilometres south of Cambridge Bay.

“Having successfully recovered a significant number of carats from the high-grade concentrate stockpiles and having successfully re-established continuing around-the-clock production at Jericho over the last months, Shear has demonstrated that a significant number of diamonds went unrecovered during Jericho’s previous operations,” the news release said.

This drop has posed “significant challenges to Shear’s finances.”

In June, Shear and its diamond marketing partner and lender, Taché Company N.V., had decided to continue funding production from the mine’s high-grade stockpiles.

Now Shear and Taché have decided to stop shipments to Taché after mid-September.

“This suspension is in Shear’s long term interest,” the news release said.

Shear now plans to seek other financing or, “alternative transactions to move the project and exploration forward, in order to be in the position to proceed to production when diamond markets recover.”

“While we are gratified that we achieved our 2012 goals, we are subject to many factors that are outside our control, such as current low diamond prices. Prices have dropped significantly just as we were hitting our stride,” said Shear’s president and chief executive officer Julie Lassonde.

“Shear had assembled an outstanding team that has enabled us to overcome many challenges and in achieving our goals, including recently repairing a damaged thickener core well ahead of schedule and on budget. We will now turn to obtaining further financing for exploration.”

In addition to its $2 million term loan, Shear has to date drawn $1.6 million against its $3 million revolving line of credit with Taché.

The first signs of potential trouble at Jericho surfaced Aug. 7.

That’s when the Nunavut Impact Review Board contacted Lassonde asking for outstanding reports, including Shear’s 2010 and 2011 annual report, quarterly reports for 2010 and 2011, a wildlife monitoring and draft wildlife mitigation and monitoring plan and how Shear had addressed “issues of non-compliance” from the NIRB’s 2011 site visit.

The NIRB asked for a response to the list of outstanding reports within 30 days.

Shear bought the mothballed Jericho property from the insolvent remains of the Tahera Diamond Corp. in August 2010.

The Jericho mine, which last operated from 2006 to 2008, was Nunavut’s first diamond mine.

After acquiring the site, Shear announced a plan to extract diamonds from stockpiles of ore that Tahera left behind.

This past June, the company reported it had successfully started 24-hour operations at its Jericho mine.