Decision follows a season of mishaps 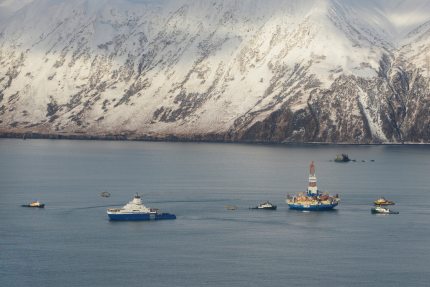 After a spate of mishaps and mechanical issues that beleaguered Royal Dutch Shell’s fleet attempting Arctic offshore drilling in Alaska, the company announced Wednesday it would suspend its 2013 drilling season.

Shell is shutting down its 2013 drilling season in order “to prepare equipment and plans for a resumption of activity at a later stage,” the company said in a statement.

Also, numerous incidents with the drill ship Noble Discoverer and drill rig Kulluk — key pieces of Shell’s Arctic plans — have forced the company to take those vessels to Asia for repairs.

The conical drill rig Kulluk left under tow from Kiliuda Bay on Tuesday, after spending more than a month in the sheltered waters of Kodiak Island in the wake of its grounding on New Year’s Eve. The ship, being towed through the turbulent waters of the Gulf of Alaska, was separated in late December from its tow vessels before washing ashore on Sitkalidak Island, south of Kodiak.

The Noble Discoverer has been docked in Seward since November, after it was towed to port due to a problem with its propulsion system. A Coast Guard inspection turned up numerous safety issues with the vessel, as well as possible pollution control concerns.

That investigation has been handed over to the U.S. Attorney’s office in Anchorage for further review, and may see legal action brought against the contractor in charge of the Discoverer’s operation, Noble Corp.

Shell Alaska spokesman Curtis Smith said that the decision to put a hold on the 2013 season came after Shell assessed the viability of drilling this year in the wake of the Kulluk incident.

“This is based on the time needed to assess the readiness of our rigs and to ensure the integrity of the safety-management systems that govern our day to day operations,” Smith said via email. “The scope of work for both rigs will only be determined after they arrive at their respective shipyard destinations.”

Shell’s statement on the suspension of the 2013 drilling season emphasized a commitment to responsible development in the Arctic.

“We’ve made progress in Alaska, but this is a long-term program that we are pursuing in a safe and measured way,” Shell President Marvin Odum said in the statement. “Our decision to pause in 2013 will give us time to ensure the readiness of all our equipment and people following the drilling season in 2012.”

This article was reprinted with the permission of the Alaska Dispatch.