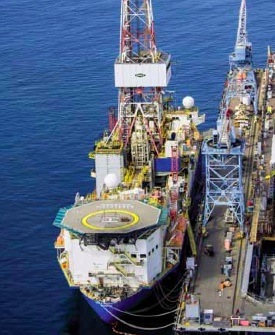 The Noble Discoverer drilling rig pulled out of the Chukchi Sea after less than a day of drilling. (PHOTO COURTESY OF SHELL)

After less than a day of “historic” drilliing offshore Alaska’s North Slope, Shell decided to stop drilling in the Chukchi Sea due to sea ice.

As a precautionary measure, the oil company said Sept. 10 that it would temporarily move off its Burger well to avoid “potentially encroaching sea ice.”

Once the ice moves on, Shell’s drill ship, the Noble Discoverer, planned to re-connect to its eight anchors and continue drilling.

When Shell’s drilling started Sept. 9, it marked “the first time a drill bit has touched the sea floor in the U.S. Chukchi Sea in more than two decades,” the company said in a news release.

The company said the drilling was a culmination of its six-year effort to explore for “potentially significant oil and gas reserves, which are believed to lie under Alaska’s Outer Continental Shelf.”

“This is an exciting time for Alaska and for Shell,” said a Sept. 9 news release from Shell. ”We’re proud to be offshore Alaska, and we’re extremely proud of the preparation we’ve put in place to do it right.”

The Noble Discoverer was installing a foundational well, also called a top hole, which starts with a six-by-12-metre area excavated into the seafloor called the mud-line cellar.

This hole is an insurance measure to protect the blowout preventer from the risk of damage by any large, unseasonal ice floes that could reach to the sea floor.

But some of the ice around the Noble Discover was already up to 25 metres thick, and moving at 0.5 knots or at about one kilometre an hour.

Last December, the National Energy Board of Canada, the federal body responsible for regulating offshore drilling in the Canadian Arctic, issued a report that called for improved safety in offshore drilling.

“Any company wishing to drill in the Canadian Arctic must demonstrate to us that they have a strong safety culture,” said its report.