Ship director and Inuk Ranger tell the tale of Terror

“I believed him right from the start… So why not change the plan and follow a story that I believed to be true?” 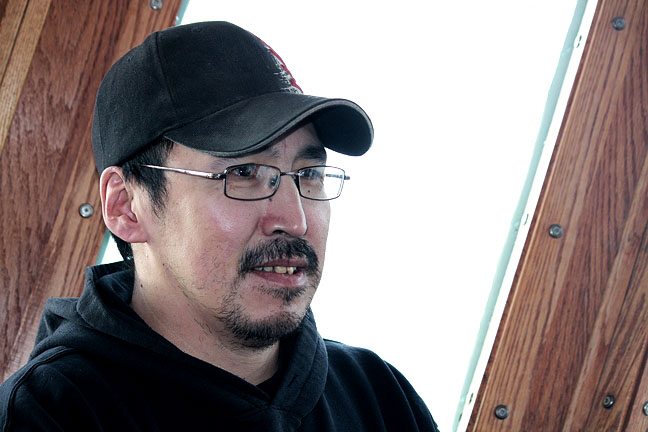 Sammy Kogvik, on board the Martin Bergmann, around the time he told ship’s director Adrian Schimnowski a story about a ship’s mast he thought he’d seen. 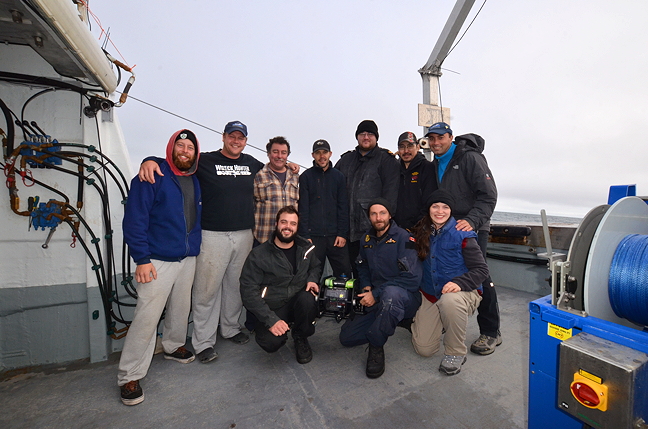 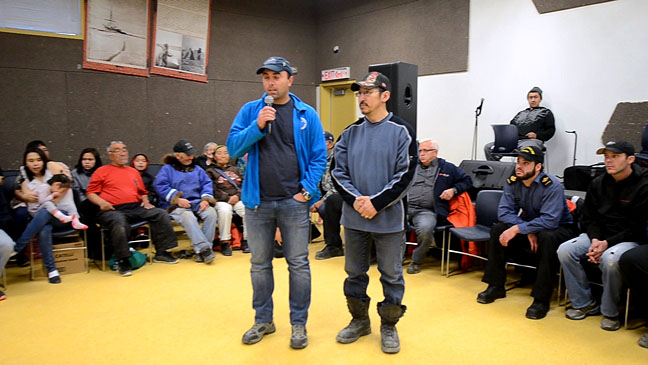 Martin Bergmann ship’s director Adrian Schimnowski and Canadian Ranger Sammy Kogvik tell their story of the Terror’s discovery at a feast in their honour in Gjoa Haven Sept. 17.

The day Adrian Schimnowski met Sammy Kogvik was not what you might call memorable. But, the day after, the two men made history.

Kogvik’s paperwork for a berth aboard the Laurier had run into red tape, so the Coast Guard had asked Schimnowski, director of operations on the Bergmann, if he could bring Kogvik aboard as the Bergmann and other vessels departed on their 2016 search for British explorer Sir John Franklin’s missing ship: the HMS Terror.

The destination: Victoria Strait, northwest of King William Island, in the remote heart of Canada’s Arctic.

At least, that was where they were supposed to go.

“Adrian, I have a story to tell you,” Kogvik said quietly to Schimnowski, shortly after coming aboard.

What followed was an exciting 24-hour pursuit of history complete with superstition, coincidence, myth and a fair share of risk. But it paid off with the long-anticipated discovery of the Terror nearly 170 years after she sank.

Sir John Franklin and 128 crewman, charged by the British Admiralty to find the Northwest Passage, departed England aboard the HMS Terror and HMS Erebus in May 1845 and—save for a brief sighting by whalers in Baffin Bay the same summer—were never seen again by their western peers.

Parks Canada divers discovered the crushed remains of the HMS Erebus in the shallow waters of Queen Maud Gulf in 2014.

But the Terror’s final resting place had eluded both professional expeditions and armchair historians alike since 1848.

Except for Kogvik. He explained to Schimnowski he thought he might have seen the Terror seven years earlier.

In 2009, Kogvik and James Klungnatuk were travelling overland by snowmobile to a favorite fishing spot outside Gjoa Haven when they spotted something on frozen Terror Bay.

“We were heading across Terror Bay and I stopped,” Kogvik told Nunatsiaq News, recounting the story from his home in Gjoa Haven, Sept. 20.

“I was getting off my snowmobile and I looked out and there was something strange sticking out of the ice. It was pretty far out but we could see it and I asked my hunting buddy what it was and he said he didn’t know.”

As they drew closer, Kogvik and Klungnatuk found an old wooden pole, possibly a ship’s mast, sticking straight out of the ice, about six feet tall.

“We got to it and we stopped and we started talking. I told my hunting buddy maybe this is the Terror ship they’ve been looking for,” Kogvik said.

Kogvik took out his camera and posed for a photo with the wood pole.

But as he made his way back to Gjoa Haven a few days later, Kogvik somehow lost his camera.

“I left my camera in my outside pocket when I was travelling. I kept bending down to check the snowmobile and I guess from there I lost my camera,” he said.

About a year later, Klungnatuk died in an all-terrain vehicle accident. The events felt like omens and were enough to silence Kogvik about the strange encounter for years.

Schimnowski knew he had to act after hearing Kogvik’s story and feeling the courage required to tell it.

“I believed him. I believed him right from the start. So why not try it? Why not change the plan and follow a story that I believed to be true?” he said, on a short break in Winnipeg Sept. 19.

Besides, it wasn’t the first ship story Schimnowski had heard about Terror Bay.

“[People] had seen something there many years ago, and over time, and for some reason, the stories were not told or not listened to,” he said.

“I heard a story four years ago [about] Terror Bay and Parks Canada was there. I thought that was amazing and we should go there, but Parks Canada didn’t seem interested at the time.”

But this time, he wasn’t about to let it go. As the Bergmann sailed through Simpson Strait, Schimnowski gave orders for an unscheduled detour.

And then on Sept. 3, at around 8:30 a.m., while Kogvik was sitting in the mess hall eating breakfast, the Bergmann crew found the Terror precisely where Kogvik said it would be.

“Sammy’s eyes were wide open and he was speechless. He was shocked, he said ‘Finally, we found it,’” Schimnowski recounted.

“There were lots of man-hugs. Lots of high-fives.”

Laying upright, about 24 metres, or 78 feet, below the surface of the bay, the Terror was in remarkable shape with most of her hatches sealed and containing a trove of valuable artifacts.

“Everything was in its place. It was not like it was left in a hurry. It looks like it was locked down intentionally and that means the crew must have sailed it there,” Schimnowski said.

The dishes inside the ship were all stacked neatly with a small kettle placed carefully in a holder. A desk stood against a bulkhead with its drawers open.

It’s a discovery that will have implications for years to come as historians rewrite the narrative of Franklin and his crew.

To start, both the Erebus and Terror were found in drastically different locations from their last recorded position “beset in ice” in Victoria Strait.

That’s according to a note left by Franklin officers and found in a cairn on the north end of King William Island in 1859.

Dated 1848, the note indicated the remaining crew of 105 was abandoning their ships in a desperate overland push for Back River and onwards to the nearest Hudson Bay Co. trading post.

The final location of both ships now suggests the vessels were re-manned, with life possibly continuing for the surviving crew members after 1848.

The credit for the Terror find rests with Kogvik, Schimnowski said, and all the Inuit testimony gathered over generations that correctly identified the locations of the Terror and Erebus.

“The Inuit know the land better than anyone else and I’m a visitor. I’m in their backyard and I would be ashamed not to listen because really, its about life and death in the Arctic,” he said.

“It will teach so many people that maybe the simple thing of listening is more important than all the technology and all the big equipment that someone can bring aboard the ship to look for something.”

The Bergmann’s investigation of the wreck was cut short when its remote camera was lost—a strange coincidence for the seemingly camera-shy Terror.

Schimnowski jokes the lost camera might have been the price of admission.

“Maybe we were supposed to leave something behind. Sammy left his camera too without knowing. Maybe that’s what you need to do. Leave a gift,” he said.

The ties that bind

The community of roughly 1,000 held a feast for the Bergmann crew Sept. 17 where Kogvik and Schimnowski told the story of the discovery and their newfound friendship.

“We were so happy that Sammy was on board with us because we have a comrade that will sail with us next year and many years to come,” Schimnowski said.

“I’m happy that I’m helping the community of Gjoa Haven,” Kogvik said, adding he hopes the Terror’s close proximity to his hometown will boost the local economy.

Parks Canada divers visited the Terror to confirm its discovery shortly after the Bergmann returned to port.

But according to Schimnowski, Parks’ divers faced a strong tidal current that clouded the wreck in silt and made visibility near zero.

“The divers had to put their face masks right to the shipwreck to see it,” he said.

A Parks Canada statement released after the Terror’s discovery on Sept. 14 made no mention of the Arctic Research Foundation by name and referred to the Terror as “a potential discovery” requiring further investigation.

Rumours say the Bergmann’s unscheduled detour to Terror Bay, away from the official expedition in Victoria Strait, might have caused the snub.

But Schimnowski stands by his decision and the incredible story that led him to the Terror.

“We followed our instincts to follow Sammy’s story and I think, because of that, that’s what’s caused all of this to happen. It wasn’t planned but it was something that had to be done. I’ve heard too many stories that haven’t been listened to, so its time to start listening and we did,” he said.

“We have something great to celebrate with all partners, with the expedition, with the people of Gjoa Haven, Canada and the world.” 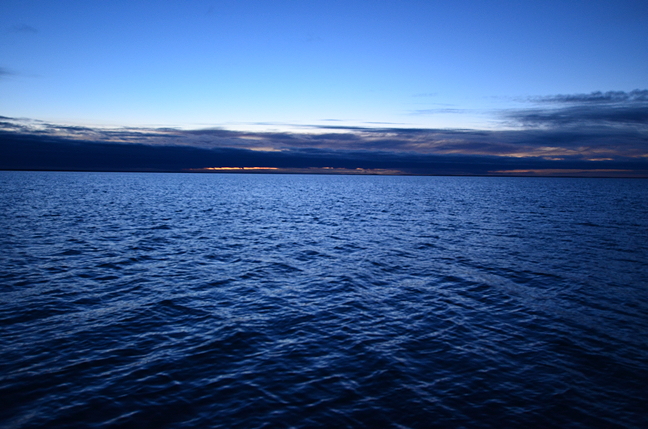