Summer survey of Erebus will be cursory; full excavation delayed to 2018 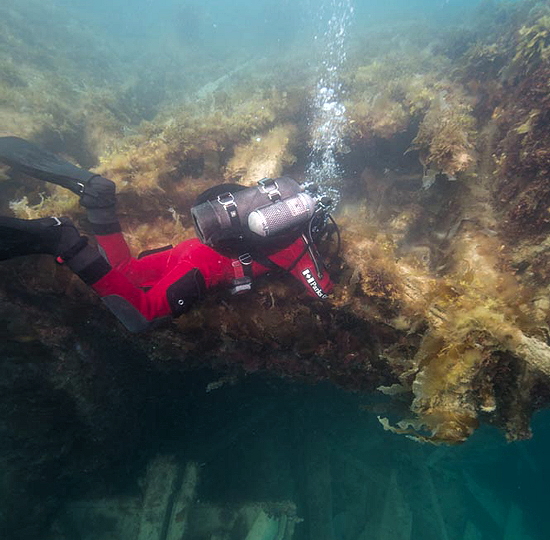 Parks Canada underwater divers will have to settle for a cursory glance at the HMS Erebus wreck this summer since their research vessel is stuck in dry dock in British Columbia.

According to documents filed with the Nunavut Impact Review Board, Parks Canada has been forced to significantly scale back its much anticipated Erebus excavation this year because their research vessel, the David Thompson, won’t be able to make it to the wreck site in time for the summer field season.

In an email to the NIRB in early July, Ryan Harris, Parks Canada’s senior underwater archaeologist, says there will be no underwater excavation at the Erebus site this year.

Instead, the federal agency proposes to set up a land-based camp at one of two nearby island locations and use a zodiac to transport a six-person team of underwater archaeologists to and from the wreck site to conduct “scientific diving.”

Harris suggests one of those locations will also be assessed for a future “Guardian hut.”

The hut, which was proposed by the Franklin Interim Advisory Committee, would be seasonably occupied by a person hired from Gjoa Haven to monitor the wreck and report any unauthorized visits.

When asked whether this constituted a disappointing set-back for the team and what exactly would be done at the wreck site this year, Parks Canada communications took four days to respond and then offered no details.

“In this revised plan, pending approval, Parks Canada’s Underwater Archaeology Team would focus its efforts on continuing to expand our knowledge and understanding of HMS Erebus,” Parks Canada media relations wrote in an email to Nunatsiaq News.

In response to Harris’ correspondence, the NIRB said that the scope of the project has changed so significantly that the old proposal will be terminated and the new project description considered as a brand new file.

In a July letter to Harris, the NIRB’s executive director Ryan Barry said the Nunavut Planning Commission must first approve the revised project proposal before the NIRB begins its screening.

Parks Canada was hoping to conduct research at the site from Aug. 26 to Sept. 2 this summer.

In its original proposal to the NIRB, Parks Canada’s 14-member underwater archaeology team was hoping to conduct comprehensive work over two to four weeks at the Wreck of the HMS Erebus and HMS Terror National Historic Site in Wilmot and Crampton Bay, Queen Maud Gulf, in August and September including:

• partial disassembly and/or consolidation of the Upper Deck structure;

• continuation of video and photo documentation of the site using 3D modelling.

“The archaeology component is essential to understanding the story of the Franklin expedition and its relationship with Inuit history in the area,” Parks Canada said in its original proposal to the NIRB.

“Parks Canada is planning to build infrastructure in Gjoa Haven linked to the interpretation of the wreck and the Franklin story. This will provide employment, economic and tourism opportunities for the Arctic communities.”

Sir John Franklin’s two lost ships, the Erebus and Terror, were recently found, after decades of searching, in Nunavut waters—the Erebus in September 2014 and the Terror two years later, in September 2016.
According to historical accounts and evidence, those ships were abandoned by their British crew members in 1848.