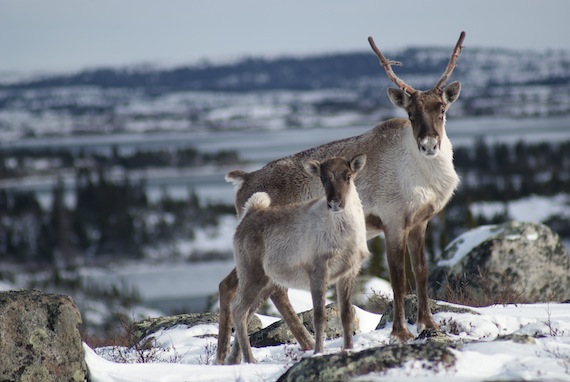 A new survey says the number of caribou in Nunavik’s George River herd has fallen to new lows. (FILE PHOTO)

But there’s not much good news in the survey carried out this past July by Quebec, the Newfoundland and Labrador Government’s Department of Environment and Conservation, the Institute for Environmental Monitoring and Research and the Torngat Wildlife, Plants and Fisheries Secretariat.

“The recent survey confirms an ongoing decline of the George River migratory caribou herd population over the past few years,” a recent news release from Quebec said.

The total George River herd population is currently estimated at about 27,600 animals.

Biologists, who plan to continue monitoring other health indicators, such as adult survival rate and calf recruitment rate, believe the herd’s population could fall to fewer than 25,000 animals by October.

That’s about a third of the roughly 74,000 caribou which were estimated to be in the herd two years ago and much lower than the 385,000 caribou spotted in 2001.

Given these results, Quebec plans to consult Nunavik’s Hunting, Fishing and Trapping Coordinating Committee and the other parties to prepare a caribou management plan identifying management measures aimed at restoring the herd.

Last December, Quebec decided to close the sports hunt of the George River herd in three different areas for the 2012-13 sports hunting season.

The most recent news is another blow to a $20-million caribou outfitting business, which was a mainstay of Nunavik’s economy for more than 20 years, pouring money into local stores and airlines from August to October.

In a good year, about 3,000 to 5,000 hunters would come mainly from the United States to Nunavik for one-week hunting packages and a chance to bag two caribou.

The caribou from the George River herd were particularly prized for their large racks of antlers.

Up to now, the new regulations hadn’t impacted the Inuit caribou harvest in Nunavik, but the new survey results could lead to a management plan that would see quotas established, as is the case for Nunavik’s beluga hunt.