“A home away from home” 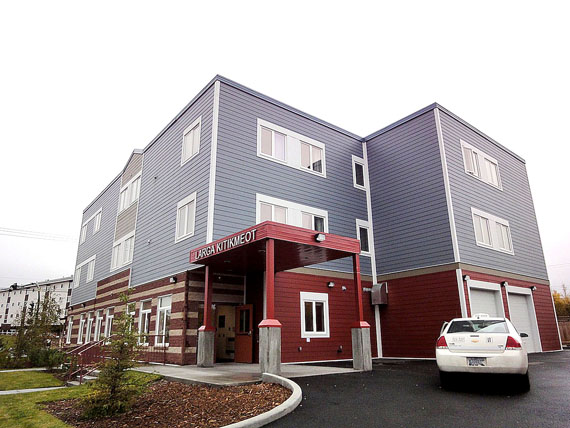 Larga Kitikmeot, the patient residence for Nunavut beneficiaries from the Kitikmeot region, stands at the corner of Franklin and Matonnabee Streets. (FILE PHOTO) 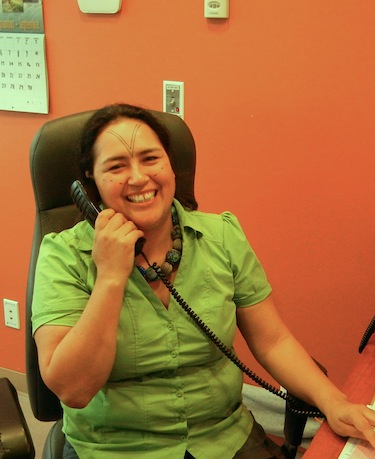 When you walk in the door of Larga Kitikmeot in Yellowknife, the first person you’re likely to meet is receptionist Angela Johnson, originally from Kugluktuk. (PHOTO BY JANE GEORGE)

If you know someone who spent Thanksgiving Day at the Larga Kitikmeot patient residence in Yellowknife, don’t worry.

On Monday evening the kitchen staff there served up a feast of turkey, stuffing, sweet potatoes, cranberry sauce, vegetables and pumpkin pie for dessert.

Sandwiches and caribou koak were put on the Oct. 10 menu for lunch so people would be “hungry enough for a big supper,” said manager Casey Adlem.

Nearly two years after the grey, white and red brick building at the corner of Franklin and Matonnabee Streets first opened, its 26 casual and permanent staffers have found their stride.

The only bump this year, Adlem said, resulted from upheavals at Yellowknife’s Stanton hospital.

The Stanton Territorial Health Authority cancelled 274 elective surgeries in January and February at the hospital due to problems with sterilization equipment. Then, surgeries were cancelled again there in June due to the same persistent problems, creating a backlog of about 360 delayed surgeries from the cancellations.

These cancellations and postponements of surgeries also kept the numbers of residents at Larga Kitikmeot in the “40s,” below its capacity of 56, said Adlem — whereas the 28-room residence otherwise might have been full to overflowing.

But Adlem remains happy with how Larga Kitikmeot has grown since its opening in December, 2009.

The residence, which replaced the former 43-bed Lena Pedersen patient boarding home, often criticized for its cramped quarters and poor food, has become “like a home away from home,” for Inuit from the Kitikmeot region, their escorts and for people who work there, Adlem said.

About 63 per cent of Larga Kitkmeot’s staff come from the North, she said. These numbers would be higher, but Larga Kitikmeot can’t supply housing for people eager to move from Nunavut to work there.

There’s been some turnover in staff among the 26 casual and permanent workers, Adlem admits — mainly due to the fact that Larga Kitikmeot can’t compete with workplaces that offer more benefits and higher pay.

Things have been running so smoothly that Adlem even took a holiday outside Yellowknife this year — and didn’t worry about what was happening back at Larga Kitkmeot.

As for the residents, they’ve also learned the ropes, Adlem said.

A zero-tolerance policy remains in effect for drugs and alcohol, which people increasingly respect in spite of the presence of many popular bars in nearby downtown Yellowknife.

“Everyone knows the rules,” Adlem said.

Knowing most of the people who stay at Larga Kitkmeot, through family links and 10 years spent with the Government of Nunavut’s health and social services department in Cambridge Bay, helps smooth out any problems which arise, she said.

Larga Kitikmeot also continues to receive support from people in the Kitikmeot and from companies such as Sabina Gold, which recently contributed frozen and canned foods from its closed mining exploration camps to the residence.

The three-storey building, built for $6 million in 2009, also elicits no complaints from Adlem.

The elevator, which takes residents upstairs, works like a charm.

Each room has its own flat-screen television, phone and wi-fi internet connection, and every resident receives a key for the room and a locker to store valuables in.

There are play areas on each floor and an outside sitting area for smokers.

Larga Kitikmeot also provides airport pick-ups, transportation to medical appointments, trips to stores and the delivery of meals to the hospital, when required.

Two vans pick up and drop off patients in an insulated indoor garage area so no one waits outside during the winter.

Like the other Larga patient boarding homes for Nunavut Inuit beneficiaries in Edmonton, Winnipeg and Ottawa, Larga Kitikmeot is a joint venture between Nunasi Corp., which is owned by the Inuit of Nunavut, and a regional Inuit association — in this case, the Kitikmeot Corp..