“I extend my deepest sympathies to the family, friends and comrades of Sgt. Janick Gilbert” 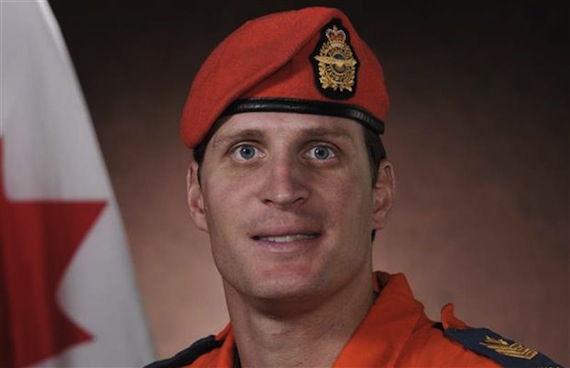 Sgt. Janick Gilbert died Thursday during a search-and-rescue mission near Igloolik. (PHOTO COURTESY OF THE DEPT. OF NATIONAL DEFENCE)

The body of a Canadian search-and-rescue technician who died during an Oct. 27 rescue operation in Nunavut arrived in Ontario on Saturday afternoon.

Sgt. Janick Gilbert, 34, from Baie-Comeau, Que., died Thursday night during a mission near Igloolik, Nunavut, where Gilbert and two other soldiers parachuted into the cold waters to rescue two boaters.

Gilbert’s body arrived at the Canadian Forces Base in Trenton, Ont., at 3 p.m..

The ceremony was attended by Defence Minister Peter MacKay, Chief of the Defence Staff Gen. Walt Natynczyk, and the head of the Royal Canadian Air Force, Lt.-Gen. Andre Deschamps.

Hundreds of members of the military and his family, along with friends, were on the tarmac at CFB Trenton when the casket of Gilbert was carried out of the CC-130J Hercules which had carried him from Nunavut.

Gilbert died Thursday night during a mission near Igloolik, the Department of National Defence said Oct. 28. He was married with children, though officials did not release any further information about his family.

“On behalf of the Defence family and our brave men and women in uniform, I extend my deepest sympathies to the family, friends and comrades of Sgt. Janick Gilbert, who died yesterday in Nunavut,” Deschamps said in a statement.

“He lost his life in the service of his country while unselfishly answering the call for help.”

The incident is under investigation.

Capt. Jennifer Jones, a CFB Trenton-based spokeswoman for the military, said Gilbert was part of a team that left Trenton on a Hercules aircraft on the morning of Oct. 27 in response to a call that came in about two boaters stranded near Igloolik the previous night. Another aircraft flew in from Winnipeg.

Once the boaters, who have now been identified as David and Lester Aqqiaruq, ere located, a radio was dropped to them by the rescue crew. In a statement, Col. Sean Friday, commander of 8 Wing Trenton, said that when it was determined the condition of one of the boaters was deteriorating and communications broke off, the three technicians parachuted down. It was then that Gilbert lost his life.

Jones had no specific information on where they landed, or what happened before the three members of the rescue team and the two boaters were transported by a helicopter — flown in from Gander, N.L. — to the health centre in Igloolik.

Jones said she did not know whether Gilbert was alive when the chopper picked up the five individuals, but did say everyone else was in good condition. She said the boaters, identified in other reports as a man and his son who had been walrus hunting, suffered minor injuries.

Friday said Gilbert will be remembered as a family man and consummate professional.

“A brilliant operator with 13 years of experience, Sgt. Gilbert will be sorely missed by all within the SAR Tech trade and by all those who have had the pleasure of making his acquaintance,” Friday said in a statement.

“Janick lived by what the SAR community believes in and exemplified the meaning of rescue; he gave his life [so] ‘that others may live. Tragically, Janick perished during the rescue attempt. His laughter and joie de vivre are only some of the many positive attributes that were so cherished by those who knew him.”

Prime Minister Stephen Harper offered his condolences to the soldier’s family, friends and colleagues in an Oct. 28 statement.

“The Canadian Armed Forces’ search-and-rescue technicians are some of the best trained in the world, and have saved thousands of lives nationwide.

“Sgt. Gilbert was an extremely brave Canadian who made the ultimate sacrifice while proudly serving his country.”

National defence minister MacKay said “Sgt. Gilbert is a hero who deserves the gratitude and respect of his nation. He will be missed by the Canadian Forces family, and his loss will be profoundly felt in with all those with which he served.”

“The operation itself resulted in the rescue of two local citizens,” Johnston said.

“[Gilbert] has demonstrated tremendous courage in circumstances of great peril. His sacrifice will not be in vain; we will be forever grateful to him.”

Nunavut MP Leona Aglukkaq also sent her condolences to the family of Gilbert, “a dedicated SAR Tech who gave his life in the service of others in the North.”

Nunavut premier Eva Aariak said in a statement that “Sgt. Gilbert displayed unwavering courage and the ultimate sacrifice in the call of duty. We are humbled by his bravery and forever grateful for his heroic actions.”

“Thank you to all of those who risk their lives on Search and Rescue missions in our vast territory with its extreme conditions,” Aariak said. “On behalf of the Government of Nunavut, I would like to express my deepest sympathies to the family, friends and comrades of Sgt. Janick Gilbert.”

“If you could tell that rescue team, I feel sorry for them,” he said.