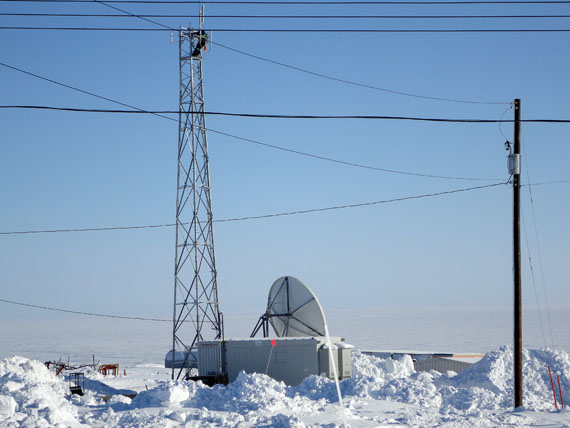 An SSI Micro communications site in Nunavut, showing a satellite dish and wireless antenna. The company has teamed up with the Kitikmeot Inuit Association to start a pilot project in Kugluktuk and Cambridge Bay that will offer Inuit-language programming on FM radio. (PHOTO COURTESY OF SSI MICRO)

Through a marriage of open source software, satellite technology and FM radio, the Kitikmeot Inuit Association and SSI Micro have come up with a new way to put the Inuit language on the airwaves.

If all goes as planned, by mid-2016, Kugluktuk and Cambridge Bay residents will get a 24-hour-a-day, seven-day-a-week FM radio service that includes a daily Inuit language radio program aimed at revitalizing Inuinnaqtun.

And they also hope that after the first small seed germinates, it will one day grow into a new Nunavut-wide radio network.

“The more communities that are on there, the broader the scope and appeal of the content itself,” Proctor said.

By June 2016, after they receive the necessary licences and permits from the CRTC and Industry Canada, they hope to start off with a two-year pilot project in Kugluktuk and Cambridge Bay.

SSI Micro, through its offices in Kanata, Ont., and Yellowknife, already offers broadband satellite-based internet in Nunavut through its Qiniq brand and in the Northwest Territories through Airware.

Its relationship with the KIA dates to 1998, when SSI Micro worked with the Inuit organization to bring a satellite-based internet service to the Kitikmeot region’s five communities.

The OpenBroadcaster software can be used to manage radio and video broadcasts and allows live-to-air and automated programming.

“The KIA was interested in advancing and promoting the Inuit oral culture. So it was a bit of a coming together of Jeff’s desire to not only move into radio, because we can leverage our satellite facilities, and KIA’s desire to work on a pilot project to see how this might work in a couple of key communities,” Proctor said.

“Rob played a pretty big role in this as well. He developed OpenBroadcaster, which is the software foundation for this project,” said Chris Fraser, an SSI Micro development officer.

“The three groups began these conversations about a radio network for the Kitikmeot, one thing led to another, and here we are,” Fraser said.

The OpenBroadcaster web interface can allow any authorized person to put together radio shows and music playlists from libraries of pre-recorded content.

It can also be used to plug in public service announcements and paid advertisements, or provide for live programming.

The KIA will use it to manage its own daily Inuit-language time slot.

But other participants, such as volunteers, community radio societies and hamlets, may be able to use the software to gain access to their own community access time slots.

“The concept of a studio changes with advances in technology. Studios become really virtual. You could broadcast from a smartphone or a computer, rather than from the four walls and glass windows of a studio,” Proctor said.

SSI is capable of managing the system remotely from its satellite teleport in Kanata, Proctor said.

And streaming music programs, all of which must conform to CRTC Canadian content regulations, can be easily assembled through a drag-and-drop interface.

“Music selections must adhere to any CRTC direction on Canadian content, but it is expected that programming will generally feature local performers, Inuit performers from the circumpolar north, as well as Canadian aboriginal music,” a background document says.

“Such content would be rotated in a mix that also includes country, rock and hip hop and other music genres popular in the Kitikmeot region.”

In Kugluktuk and Cambridge Bay, SSI Micro will install their own low-power FM antennas, less than 50 watts each, with reception available within a 10-kilometre radius around each community.

In the future, the system could be adapted to integrate community video and cable TV, as well as emergency announcements and other communications.

Their next step is to file applications with the CRTC this summer or fall and to obtain technical permissions from Industry Canada.

“Without trying to pre-determine the regulator’s decisions, we’d like to think we can get ability to be up and running about a year from now,” Proctor said.