“There’s new people, but I think we’ll work together well” 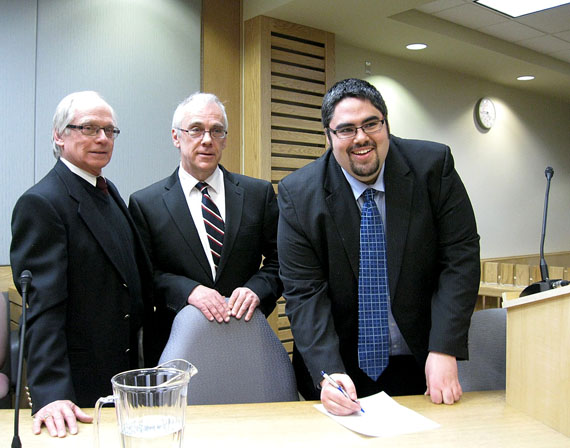 Stephen Mansell, right, signs on as Iqaluit City Council’s latest councillor at a swearing-in ceremony March 14 inside the Nunavut Court of Justice. Nunavut’s senior justice of the peace, Calvin Clark, left, administered Mansell’s oath in the presence of Iqaluit mayor John Graham, centre, and five of the city’s seven other council members. Mansell fills a seat left vacant by Mark Morrissey, who resigned this past February. (PHOTO BY PETER VARGA)

Iqaluit city council was quick to fill a seat left vacant on council this month, following the resignation of Mark Morrissey Feb. 11.

Stephen Mansell officially took the seat in a swearing-in ceremony March 14, within days of council’s appointment.

The selection of Mansell, a 32-year-old lawyer with the Government of Nunavut, seemed obvious to council members at a regular meeting March 12.

Members decided unanimously, pointing to results from a by-election for a single seat last October when Mansell finished just 20 votes behind the winner, Noah Papatsie.

“The by-election was so close, I had a suspicion they might offer [the seat] to me,” Mansell said. Papatsie filled a spot left vacant by the late Jimmy Kilabuk – which had been empty for six months in 2013.

The latest appointment came as a quick solution to the second spot left vacant in council’s current three-year mandate, which is halfway complete.

Mansell is returning to a familiar job, having served on the previous council from June 2011 to Oct. 2012. He’s worked with half of the members before, but declined to take part in the last general election due to the birth of his first child.

“There’s new people, but I think we’ll work together well,” he said.

Mansell said he was glad council passed the city’s budget for 2014 before his arrival, which took two months of work to pass this year.

“It would have been tough to be placed in the middle of all that budget slog,” he laughed. “I’m definitely going to review what was approved.”

Top of mind among the projects and expenses this year, and leading into 2015, will be finishing the city’s road-paving work, “which council has to find the funds to do,” he said.

Another top item is to monitor the aquatic centre project, the biggest single project in the city’s history.

“We have to make sure it’s on time, on budget. And just do our due diligence,” Mansell said.

The returning councillor’s other priorities include passing the city’s dog and pet-owner bylaw, and following through on plans for a neighbourhood-watch program — both of which he had worked on two years before.

Born in British Columbia, Mansell has spent most of his life in Iqaluit. He is also president of the Law Society of Nunavut.