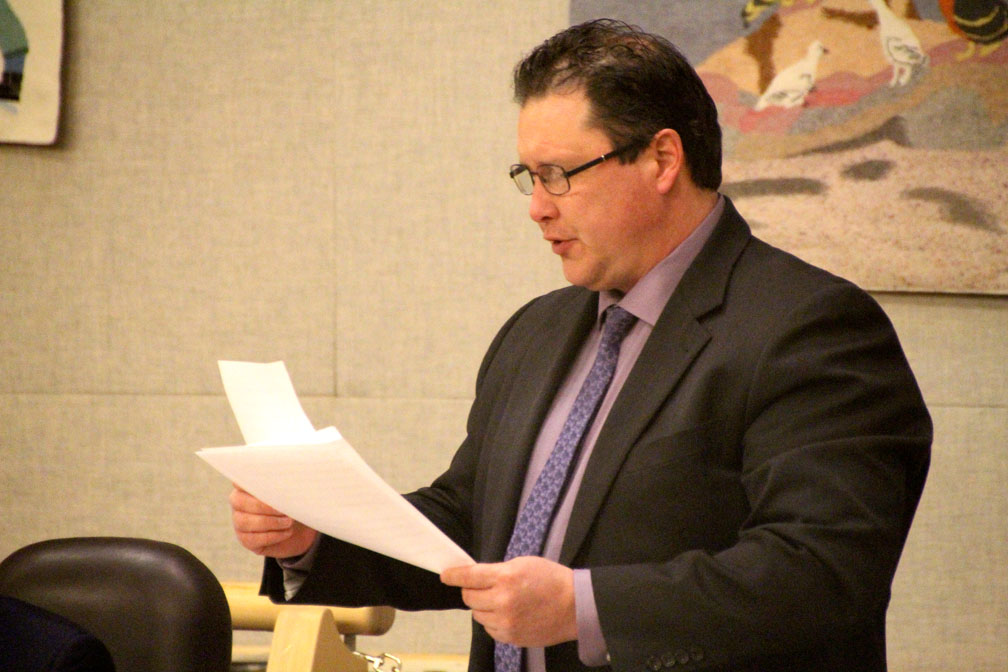 Iqaluit-Tasiluk MLA George Hickes wants Nunavummiut to know that talking to your MLA is your right and you should feel free to do it. (PHOTO BY BETH BROWN)

If you had listened to question period at the Nunavut legislature four years ago, a statement on fear-mongering experienced by Nunavut’s civil servants made yesterday by Iqaluit-Tasiluk MLA George Hickes might sound familiar.

It’s the same message he sent to cabinet in 2014, after Hickes was accused of getting “insider information” about a department.

Now, Hickes is concerned that public servants are receiving threats from senior Government of Nunavut managers and being told not to talk to their MLAs.

“The issue of employees being told to not bring to the attention of their MLA any concerns they may have seems to have reared its ugly head again,” he said.

While Hickes chose to keep details confidential, he told Nunatsiaq News there are specific examples that led him to resurrect this old message.

“There has been clear direction in some instances to not speak to members of the assembly,” he said.

Hickes added that he still finds a tone, or culture of discomfort, within the territorial public service when it comes to consulting with MLAs.

Because there are more than 3,000 employees of the GN in Nunavut, Hickes sees this as a real problem.

Regular members appeared to agree with his statement and ensuing questions when they drum-rolled on their desks throughout his statement.

Constituents need to be confident that communicating with elected members of the legislative assembly is their right, Hickes said.

And he said those employees should “feel comfortable that they will not be targeted with blind accusations from within the public administration for doing so.”

For the record, Hickes asked the minister responsible for the Public Service Act, David Akeeagok, if that law prohibits public servants from communicating with their MLAs.

He also asked if Akeeagok is aware of any directives made by senior GN managers to dissuade or direct employees from talking to their MLAs.

To both questions, Akeeagok said absolutely not.

“Yes our employees are free to provide information to our MLAs,” he said. “Employees do have those rights … there are a number of ways they are protected.”

That’s under the Public Service Act, and through an ethics officer who Akeeagok encouraged all GN staff to contact if they need to.

While there is a set process for filing complaints in areas like health and workplace safety, sometimes there are “breakdowns” in that process, Hickes said.

When that happens, an MLA is in a position to make sure their constituents’ complaints are acknowledged and properly dealt with.

“I want to make sure that people are aware that if their issue is not being taken seriously they have recourse,” he said to Nunatsiaq News.

“Some people just don’t feel comfortable coming to their MLA, because they fear repercussions from their supervisor.”

This fear is no doubt more real in small communities, Hickes said.

For his constituents in Iqaluit, anonymity is less of a concern because there are so many public servants in Iqaluit.

But in a small community there may only be one or two people who can make a specific complaint from within a government department.

Given the nature of Nunavut’s consensus government, constituents shouldn’t feel that asking a question or suggesting a new approach to an MLA is akin to publicly criticizing the government in the media or starting a formal whistle-blowing process, Hickes said.

In fact, he relies on feedback from his constituents to do his job, Hickes said.

“I value this input and use it every day in my work,” he said.

“If we as MLAs do not have the opportunity to hear directly from our constituents on their ideas for how to improve the way we do business, we will all lose touch.

Hickes said he expects to see other members bring up similar concerns.

“I’m trying to send the message across the bureaucracy,” he told Nunatsiaq News. “I think this might have opened up the can a bit.”