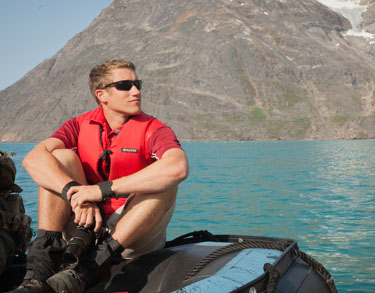 Justin Fisch enjoys the scenery during his 2014 trip North with Students on Ice. (PHOTO BY LEE NARRAWAY) 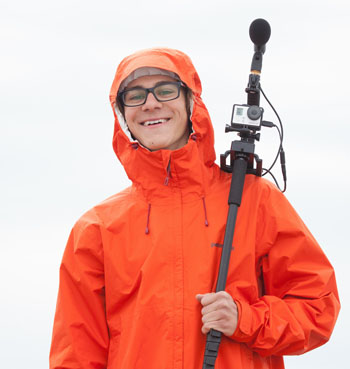 18-year-old Matt Szczepanski, pictured here as part of the 2014 Students on Ice trip, will capture his upcoming trip to Ukkusiksalik national park on film. (PHOTO BY LEE NARRAWAY)

If most southern Canadians don’t have an opportunity to see the frozen and sweeping landscapes of the North, while not bring it to them?

That’s what two students plan to do, when they do what few Nunavut tourists have done: travel the length of Ukkusiksalik National Park near Repulse Bay.

Matt Szczepanski, a high school student from Mississauga, Ont. and Justin Fisch, a law student at McGill University in Montreal found themselves among the privileged few who got to visit the Arctic last year as part of the 2014 Students on Ice expedition.

“The minute we got back from the North, we wanted to go back,” said Fisch. ‘So we started looking for opportunities.”

One of the northern students Fisch and Czszpanski met during their Students on Ice trip was Edmond Bruce, a Grade 11 student from Repulse Bay.

Bruce not only enticed the two to plan a visit to the Kivalliq region of Nunavut, but also to experience “living on the land” as Inuit do.

So both Fisch and Szczepanski are packing their video cameras this week before they head to Repulse Bay. From there, they’ll drive 12 hours by snowmobile to reach Ukkusiksalik National Park.

Ukkusiksalik, Nunavut’s fourth national park, created in 2004, is located on the northwest shore of Hudson Bay, along Wager Bay, a kind of inland sea extending 100 kilometres into the barrenlands.

Fisch and Szczepanski, who will travel by snowmobile with local guide David Nuluk – and Bruce, they hope — will stay two nights in a hunters and trappers cabin at the mouth of the bay, and another two nights at Sila Lodge, named after the local river of the same name.

The park includes a variety of landforms and wildlife: its cliffs and valleys are habitat for peregrine falcons and gyrfalcons, while its tidal flats and river mouths attract migrating birds and waterfowl.

And more than 500 archeological sites have also been found in the park area, including inuksuit, food caches, fox traps and tent rings.

But those sights are rarely seen by Canadians outside of Nunavut.

“And then there’s Ukkusiksalik, which got zero visitors,” he said. “There are all these government funds and resources put into it, yet we don’t know anything about it. It’s very under-travelled.”

“So we’re really excited to go in and learn about it,” Fisch added. “It’s important to showcase these places for people who might never get there.”

In order to do that, Szczepanski is packing his video recording equipment and plans to film a 20 to 30 minute short adventure documentary about the park.

“The reason I’m going is to capture this landscape and culture,” Szczepanski said.

He hopes to promote the film online once it’s completed; Parks Canada has also agreed to show the documentary in the five Nunavut communities closest to the park.

The students’ trip is being sponsored by a number of groups and businesses, including the Tarek and Sophie Inspiration Grant, Calm Air and Inns North. 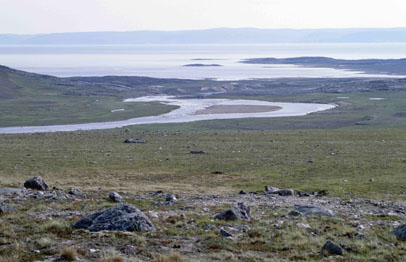