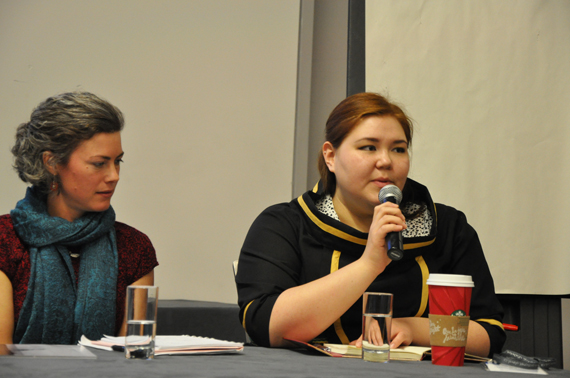 “If you want to work with Inuit, there are many who are open and willing to be part of your work — as long as it goes back to the community,” Inuit youth leader Sarah Jancke told an Arctic research conference Dec. 9. (PHOTO BY SARAH ROGERS)

They hail from different regions of the country, but there’s a common thread: all their research focuses on Arctic or Inuit issues.

And they’re here at ArcticNet’s 2014 Arctic Change conference to learn more about community cooperative research, and building the kind of relationships that will enhance the work they do, and hopefully, the lives of those who call the Arctic home.

Sonja Ostertag has spent the last eight years studying beluga whales around Hendrickson Island, near Tuktoyaktuk in the Northwest Territories.

When the University of British Columbia doctoral student started working in the NWT with local whale monitor Verna Pokiak, she got to know the woman’s family, Pokiak’s young son, and they formed a bond.

“That’s one of the reasons I love this work, returning over and over again and getting to know people in the community,” Ostertag told the Dec. 9 roundtable gathering.

Ostertag spent weeks and even years building relationships with the Inuvialuit, learning about traditional knowledge and mentoring youth in the community. In 2011, the Inuit Circumpolar Council recognized Ostertag’s contribution by honouring her for Arctic community engagement.

But not all researchers approach the North that way. The Dec. 9 roundtable was designed to help students and researchers who are new to the Arctic engage the people and places they’re focusing on.

One of the session’s panelists, National Inuit Youth Council vice president Sarah Jancke of Cambridge Bay, recalled hearing stories of researchers who visited her hometown in the 1970s to collect skin samples from local people — without asking Inuit for permission.

“Inuit still need to speak up about the kinds of relationship they expect to have with researchers visiting the community,” said Jancke, who works as a programs coordinator at the Kitikmeot Inuit Association.

“One of the things I learned is that researchers come with an outcome in mind. They’re well educated,” she said. “But when you come to the communities, you have to come thinking about what already exists here, the knowledge that Inuit have.”

Through all the change Inuit have experienced in recent generations, traditional knowledge is a value that grounds people to their culture, Jancke said.

“If you want to work with Inuit, there are many who are open and willing to be part of your work — as long as it goes back to the community,” Jancke said.

“Taking that energy and using it to educate Inuit on the amazing things around them. You all have the opportunity to inspire young people to have a future of maybe doing what you’re doing.”

Shelly Elverum has witnessed that first hand. The Pond Inlet-based environmental technology instructor saw such an interest among some of her former students that they connected with southern researchers and other youth in Nunavut to form Ikaarvik.

The group, which does community-based research with both traditional Inuit knowledge and Western science, was the recipient of the 2013 Arctic Inspiration Prize.

Elverum’s advice for researchers who are new to the North: you may be limited by time and funding, but as much as possible, let the community guide your work.

Hundreds of researchers from around the globe who study Arctic people, society and the environment, are gathering this week in Ottawa for the Arctic Change conference and to celebrate the 10th anniversary of conference host ArcticNet, the Quebec City-based group made up of universities, Inuit organizations and government agencies.

The conference, which runs until Dec. 12, promises to be one of the largest gatherings of international Arctic research ever held in Canada, says its website, welcoming more than 1,000 participants.

Sessions will cover topics spanning the Arctic environment and climate change, education and efforts towards establishing an Arctic university, along with the health and well-being of Inuit.

Alongside scientists and researchers, a number of Inuit leaders will share their perspectives at some of the workshops such as former Inuit Tapiriit Kanatami president Mary Simon, Nunavut education minister Paul Quassa and Nunavik’s health board director Minnie Grey.