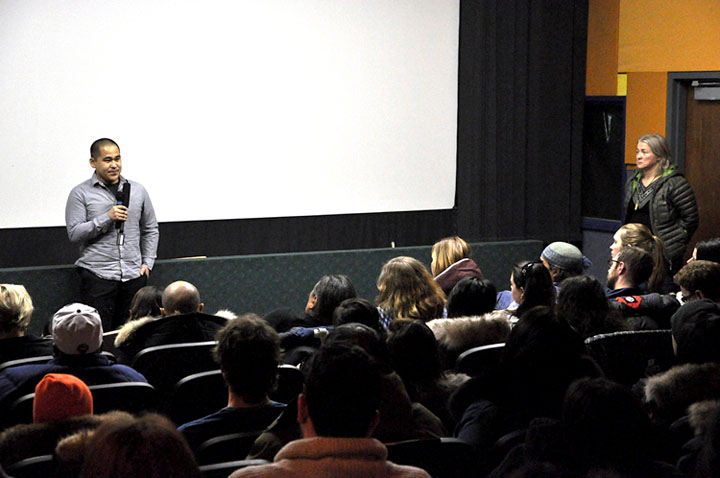 Brian Tagalik, left, pauses to gather his thoughts during a packed-house group discussion about suicide at Iqaluit’s Astro Theatre Jan. 28. Tagalik, a Nunavut rapper, opened up about how suicide has affected his life after the Nunavut première of Sol — a documentary film about the death of Igloolik artist Solomon Uyarasuk in a local RCMP detachment cell in 2012. (PHOTO BY THOMAS ROHNER)

When the lights came on at the Astro Theatre in Iqaluit at the conclusion of Sol — a documentary about the death of Igloolik artist Solomon Uyarasuk — silence hovered over the auditorium, full to its 115-person capacity.

As a result, the discussion on suicide that Embrace Life Council and movie production moderators had hoped to hold got off to an awkward, even tense, start.

“It’s always difficult to begin a discussion like this when we’re all still reflecting and taking it in,” a brave male audience member said, breaking the silence at the film’s Nunavut premiere Jan. 28. “And sometimes silence speaks volumes.”

One of the film’s directors, Marie-Helène Cousineau, who travelled from Montreal for the screening, invited Nunavut rapper Brian Tagalik to the front of the room. Tagalik appears in the film.

“I have lost friends in my hometown of Rankin Inlet to suicide, as well as throughout Nunavut,” he said, pausing often to collect his thoughts and control his emotions.

“A lot of mothers and fathers I knew that had lost children to suicide… they know it’s the system, and it’s the entire society and the assimilation of the whole process. But they would just love to know why, so that they can let go.”

His comments were met by more silence. People shifted in their seats, cleared their throats.

“Talk, talk, talk. Smile to the person beside you, give the person who needs a hug a hug. Call the helpline. Call your friends. Call your mother, your father. Call somebody. And don’t do it. You’re loved. Always.”

And then people began opening up.

They spoke in Inuktitut and English without official translators on hand, but the emotion of what they said was conveyed to all.

And many spoke of hope, possible solutions and moving forward.

“But we need to come up with these solutions and carry them out as Inuit,” Mike said. “People coming in and trying to save us has done no good.”

Some members of Uyarasuk’s family were at the screening and spoke too, in Inuktitut.

Mike translated: “The subject of suicide should be talked about. But what happened to Solomon, him being used as an avenue to talk about suicide when the family and community believe and feel that’s not how he died… that shouldn’t be.”

“I can answer that question,” Cousineau offered.

“It wasn’t a question, it was a statement,” a family member said in English.

“I appreciate what you’re saying, thank you for your comment,” Cousineau said to the family.

Lawyers representing the RCMP and the coroner’s office both recommended that the jury classify the death as a suicide.

Instead, the jury recommended that the investigation into Uyarasuk’s death be reopened in order to fill in “missing information.”

“When we were making the film… we were torn between these two things: did he commit suicide or not?” Cousineau said. “For practical reasons we had to finish the film before the coroner’s investigation.”

Cousineau said the final version of the film will include an epilogue containing information revealed at the inquest and also interviews with members of Uyarasuk’s family with their reaction to the inquest’s findings.

But one audience member, Jason Kunnuk from Igloolik, said the film helped ease his own anger at Uyarasuk’s death.

“But throughout this movie my anger slowly disappeared. Not completely, but I’m happy that the subject of suicide is being more talked about. I’m very glad I came here.”

A second screening of the film is scheduled for Jan. 29 at 5 p.m. at Iqaluit’s Astro Theatre. Admission is by donation to the Embrace Life Council.