“All suicides are preventable, but not when there’s a 3-4 month wait list for counselling” 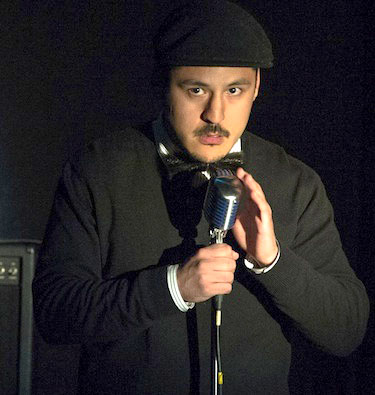 The late Nanauq Kusugak in 2013, entertaining an audience in Iqaluit at a Mahaha comedy night. The well-liked young man from Iqaluit died by suicide last week, prompting more calls for better mental health services in the territory. (FILE PHOTO)

Many in Iqaluit are asking for more mental health services after the recent death by suicide of a well-liked young man, described as wonderful, lovely, funny and friendly by the city’s mayor.

Nanauq Kusugak, who was in his early 30s, grew up in Iqaluit. Last year, he worked at the quality of life secretariat, the Government of Nunavut’s lead organization on suicide prevention, and leading up to last November’s territorial election, he served as the campaign manager and financial agent MLA Adam Arreak Lightstone, who represents the riding of Iqaluit-Manirajak.

But among many in Nunavut’s capital, Kusugak was best known as a side-splitting comic who performed on the Mahaha comedy stage.

Kusugak was also upfront about his bouts of depression. One of his last posts on Twitter was a retweet of the following sentence: “Honk if you’ve been in a deep depression since childhood and sometimes you wonder if there’s no escaping the nightmare that is yourself.”

On Twitter, members of the Iqaluit band The Jerry Cans said Kusugak never shied away from tough conversations.

But there is little systemic support for mental health needs in Nunavut, they said, and while family and friends are important, they can’t replace effective therapy, counselling and Inuit and northern mental health workers.

After a tough weekend, we found ourselves doing the unfortunate count of friends that we love who have passed. We are fucking 30 years old and we can easily name 30+ friends/family/community members who have died by suicide. Everyone in Canada needs to know this. RT. Love.❤️ߒ•

Many of Kusugak’s friends in Iqaluit said they weren’t up to speaking, but one, who did not want their name published, told Nunatsiaq News that improved access to mental health professionals is just part of suicide prevention, because society doesn’t seem to encourage engagement about mental health issues.

“It’s one thing to have access to professionals. It’s another to actually be able to talk to anyone about it,” he said.

“Every suicide is tragic,” said Iqaluit Mayor Madeleine Redfern, stopping for a moment in the interview to collect herself before going on.

Redfern, along with other community members, said Kusugak’s death once again points to the need for more mental health support—not just in Iqaluit but throughout Nunavut. Poverty, high food insecurity and inadequate housing must also be addressed, she said.

While Iqaluit, as the centre of government, may appear prosperous, some 16 per cent of its 8,000 residents are poor, Redfern said, and even those who are better off bear the burden of anxiety, depression, discrimination and the legacy of past trauma.

So there are still a number of people who are always at risk, Redfern said.

Redfern, who is also president of the Nunavut Association of Municipalities, said communities throughout the territory need an addictions treatment centre and more facilities providing mental health care.

In Nunavut, we need access to mental health services. We need healing facilities. We need health care. We need parenting classes. All suicides are preventable, but not when there’s a 3-4 month waitlist for counselling. Sending all my love to my family, friends, and community ❤️

Kusugak’s friends also say they hope the federal government will step up.

Many learned about his death during a meeting with Carolyn Bennett, the minister of Crown-Indigenous relations and northern affairs, last Thursday in Iqaluit.

During the community consultation, one participant had just made a statement to Bennett in which she spoke about the need to re-embrace Inuit men who are struggling.

“Inuit participants and others gathered in the room showed support for her statement, though it may have seemed out of place to the minister and her staff in a consultation with those involved in the arts,” said Janet Brewster during a long Facebook discussion on April 8.

“We had no idea of the hurt and sadness that lay ahead as we all struggle in our own way to cope with our loss of this beautiful man,” she said.

Brewster left the meeting with Bennett without explaining why so many were scrambling for the door.

“I wish I had stopped to say that ‘this is why I said what I did,’ and why I feel so overwhelmed when I have the opportunity to speak to someone like her. It’s real and it’s true,” said Brewster.

The year 2017 marked the lowest number of deaths by suicide that Nunavut had seen in a decade.

The Office of the Chief Coroner counted 25 suicides across the territory last year, down from 32 in 2016, and the lowest number in any given year since 2007 among Nunavut’s roughly 38,000 residents.

So far, this year, the Nunavut Coroner’s Office had investigated 11 deaths by suicide in Nunavut. Two of these deaths took place in April.

The memorial service for Kusugak takes place this Friday from 2 p.m. to 5 p.m. at the Koojesse Room in the Frobisher Inn.

“All are welcome to celebrate and share stories of Nanauq, his humour, his big heart and his impact on this community he adored. He loved and was loved by so many people. Please keep him in your hearts and join us on Friday,” said the open notice on Iqaluit’s public service Facebook page.