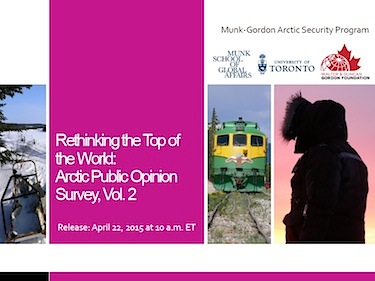 You can download a copy of the survey, “Rethinking the Top of the World,” and look at public opinion around the Arctic region. 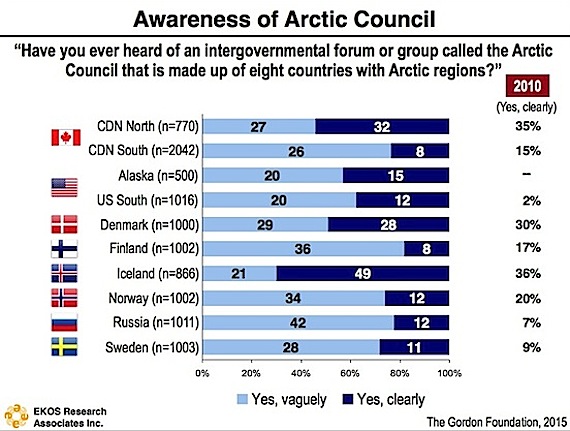 Even fewer people in northern Canada knew what the Arctic Council is in 2015 than in 2010, according to this graph contained in the survey “Rethinking the Top of the World.”

A special international poll done by EKOS Research Associates and released April 22 finds the Arctic Council is poorly known even in northern Canada.

Only about one in three northern Canadians are aware of the eight-nation organization, the poll found.

In Nunavut, slightly fewer than half of those surveyed — 45 per cent — knew Canada has been the chair of the Arctic Council for the past two years. Nunavut MP Leona Aglukkaq has chaired the Arctic Council since 2013 when Canada took the chairmanship of the body from Sweden.

In a tele-conference about those results, Frank Graves, the president of EKOS Research, said the results were comparable to other events, such as the April 21 release of the federal budget.

It’s hard, Graves said, to gain a foothold in public opinion because people live in a very “cluttered world,” with many organizations and meetings dealing with the Arctic.

And this means the Arctic Council will have to distinguish itself from the pack and try to avoid that “Arctic tipping point” — where all Arctic-focussed groups melt into each other, added Nils Andreassen, executive director of the Alaska-based Institute of the North.

Commissioned by the Toronto-based Munk-Gordon Arctic Security Program and the Institute of the North in Alaska, the EKOS poll surveyed a sample of 10,000 people chosen at random from the eight Arctic Council member states.

The survey is calculated as being accurate 19 times out of 20, with a plus-or-minus margin of error that ranges between 2.2 per cent and 4.4 per cent in Canada, Alaska and Iceland. The firm does not give margins of error for the other regions surveyed.

The survey posed many of the questions used in a previous 2010 survey to show how public opinion has changed over the last five years.

Its goal: to help those in power make more informed public policy choices that are “reflective of the views of Canadians and Americans who call the Arctic home.”

What the survey found reveals major differences of opinion between people of the eight member states of the Arctic Council on issues ranging from Arctic co-operation with Russia to the threat of military conflict north of the 60th parallel and whether the Northwest Passage is a Canadian or international waterway.

On the council, the survey found:

• awareness of the Arctic Council is strongest in Iceland (49 per cent), followed by Canada’s North (32 per cent);

• among northerners in the United States and Canada, awareness of the council’s inclusion of indigenous representation is strongest in Canada — 52 per cent in Nunavut;

• among Canadians, awareness that Canada has been the chair of the Arctic Council is strongest in Nunavut — 45 per cent;

The survey also looked at issues related to Arctic safety and security, set to be one of the major themes when the U.S. takes over the chairmanship of the council in Iqaluit April 24.

The U.S. has made stewardship and governance of the Arctic Ocean its top priority.

On these issues — and on underlying conflicts with Russia — the survey found:

• majorities in Russia (50 per cent), Iceland (58 per cent) and Finland (51 per cent) believe the threat of military conflict in the Arctic has increased in the past year, a view shared by significant proportions of citizens in other countries with Arctic territory;

• support has dipped in Canada for strengthening the nation’s military presence in the North “to protect against international threats;”

• given the statement: “the best way to protect Canada’s/America’s interests in the Arctic is to have Canadians/Americans living there,” as in 2010, a majority agreed in Canada’s North (78 per cent) and South (69 per cent);

• despite concern about security tensions in the Arctic, support for a “firm line” is only endorsed by a minority of respondents in all countries and that support for the harder approach has gone down — not up — over the past five years, the survey backgrounder said;

• a vast majority (71 per cent) in Canada’s North say the Northwest Passage lies within Canadian waters — but just 22 per cent of Alaskans and 14 per cent of other Americans, however, and very small minorities in Norway, Sweden, Russia, Finland, Iceland and Denmark express that view;

• in Russia, a slight majority (51 per cent ) consider the Northwest Passage an international waterway, a view generally shared in Alaska (41 per cent) and Denmark (40 per cent);

• respondents were largely in favour of the Arctic Council mandate being expanded to include military security. A majority of respondents in Russia agreed (79 per cent); and,

• except in Alaska, large majorities of people say the U.S. and Russia should remove their nuclear weapons and the Arctic be designated a nuclear weapons-free zone like Antarctica.

Last, but not least, the survey asked if countries without an Arctic territory should “have a say in Arctic affairs” — only in Finland did a majority of respondents agree (63 per cent). In Canada’s North, only 32 per cent agreed.

You can download a PDF of the survey’s findings here: “Rethinking the Top of the World.” 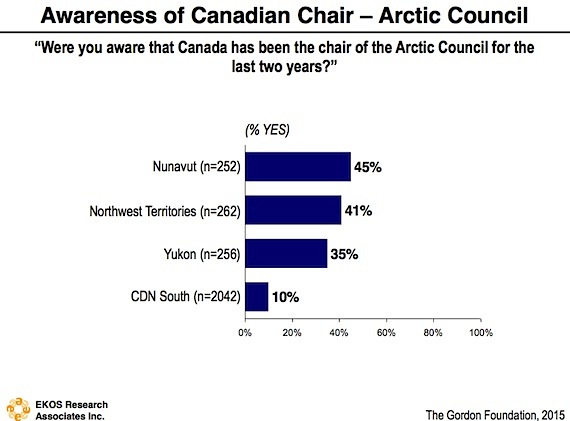 About four in 10 Nunavut residents say they were aware that Canada had been the chair of the Arctic Council for the last two years, according to this graph from the survey, “Rethinking the Top of the World.”