Survivor of harrowing Nunavut tragedy tried to revive another victim

“I’ll never forget the love they showed me” 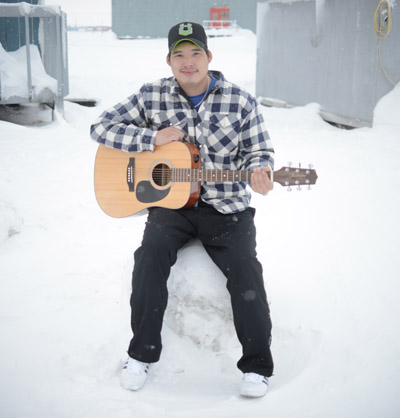 Corey Panika, 27, was the sole survivor in a accident near Whale Cove last weekend that killed his three uncles. (PHOTO BY NOEL KALUDJAK)

The sole survivor of a deadly snow machine accident along the western Hudson Bay coast is back home in Rankin Inlet, recovering from his trauma with “so much love and moral support” from his community and from Nunavummiut across the territory.

Corey Panika, 27, accompanied his three uncles on a cargo run from Rankin Inlet to Arviat last weekend, hauling a truck to a buyer in Arviat.

The group stopped along the coast for a break the following morning, just east of Whale Cove.

“We were napping when it happened,” Panika told Nunatsiaq News in an online chat. “When I noticed we were sinking I went straight to the hatch [and] water started rushing in. We were already sunk when I was halfway out.”

Panika managed to swim to the surface. He said he used all the strength he had to get back onto the ice, but it was too dark to see anything around him.

He finally spotted his uncle, Patrick, at the water’s surface and attempted for 15 minutes to revive the man.

“[Then] I noticed the sled might go down, so I gave him a hug and said sorry,” Panika recounted, “[and] quickly untied the machine and took off to Whale Cove, soaking.”

Panika managed to get the group’s snowmobile started, but the engine had been exposed to the water and it took him four hours to reach the community of 400.

The weather was mild that morning, at minus 13 C, although the wind chill made it feel more like minus 25 C.

Once Panika reached Whale Cove, it took another hour and a half for first responders to return to the scene.

Panika said he had mild frostbite but didn’t need medical attention; he took a shower and had a cup of tea while the reality of the situation sunk in.

“I knew they were gone, I watched them die,” he said of his relatives. “Nobody could have survived that long under water.”

First responders were able to recover Patrick Kaludjak’s body that day, and the body of another man a few days later. The recovery mission has been called off for now, although the third man is presumed drowned.

“It was very hard to see my family and tell them what happened,” he said. “I have a big family and they are emotional, but we are getting through this together.”

The outpouring of support from across Nunavut has been a huge comfort to all the families affected by the loss, he said. Nunavummiut have also been collecting donations to pass along to the grieving families.

Panika, a musician and songwriter, said he’s been playing his guitar a lot this week to try and clear his mind. It’s been hard to sleep, he said.

Panika said it will be very difficult to come to terms with the loss of three men, who played such an important role in his life and the lives of so many.

“They were hard-working men with so much respect for each other and our family,” he said. [They] always had each other’s back and never failed to make you laugh or smile.

“They were real men raised by great men and a strong family, I will forever be grateful for them as they taught me respect and taught me hard work pays off. I’ll never forget the love they showed me.”

Ice was late to form over Hudson Bay this winter, the Canadian Ice Service has noted, with just 40 per cent of its usual extent recorded at the end of 2016.

And some Nunavummiut have suggested that parts of the sea ice near Whale Cove tend to remain thin over the winter months.

But Panika called the incident a “freak accident.” He said he’s not an expert in land and ice skills, but he’s done the trek once before, travelling as far as Churchill.

“I just feel blessed to be alive,” he said.