“Now the community knows what you did” 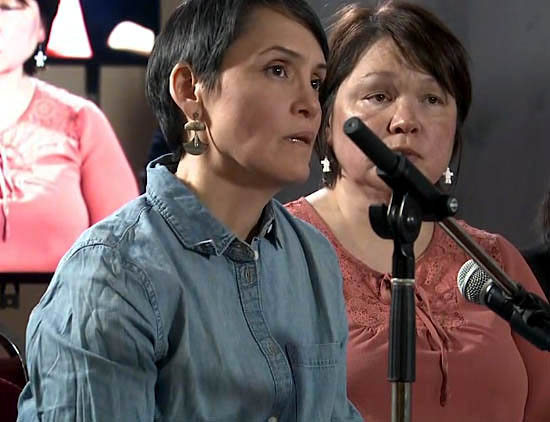 Susan Aglukark calls out her childhood abuser in testimony she gave to the MMIWG inquiry Feb. 22. “It’s not just a violation of the body, but an ongoing violation of the mind and the heart,” she told the commission. (CPAC SCREENSHOT)

RANKIN INLET—Susan Aglukark started off this week’s hearings of the National Inquiry into Missing and Murdered Indigenous Women and Girls with a song that urged women not to suffer in silence.

She didn’t plan to. The well-known Nunavut singer and recording artist ended the federal commission’s three-day hearings in Rankin Inlet Feb. 22 with powerful testimony about the man who sexually abused her when she was a child.

Aglukark said she decided to name her abuser this week when she discovered he faced a new assault charge—this time involving a family member.

“Norman Ford, you didn’t win,” Aglukark said at the hearing, forcefully. “Not now, not ever. Now the community knows what you did.”

Her MMIWG inquiry testimony, delivered after making an affirmation to tell the truth, was made in public and livestreamed on Facebook. Her testimony was also aired on broadcast television services like APTN and CPAC.

Aglukark recalled when at age eight or nine, the phone rang at her home in Rankin Inlet. It was Ford calling to say he had a gift for her and to come by his place to get it.

When she arrived, Aglukark said Ford locked the door behind her, which immediately made her feel alarmed. He told her the gift was in the bedroom and he led the girl there.

As part of the assault, Aglukark said Ford took photos of her with a Polaroid camera, which has made her wary of being photographed ever since.

And Aglukark said she has lived in “a heightened state” ever since: her hands and jaw clench, she fidgets and she’s often tense.

More than a decade after her assault, Ford was charged with assaulting other victims, and Aglukark gave testimony to help convict him. He received an 18-month sentence, of which he served six months.

Worse, Aglukark said she felt a complete sense of isolation after giving testimony. Once Ford served his time and was released, her anxiety grew as she tried to avoid him around the community.

Aglukark eventually took a job in Ottawa, a time she said she worked to rebuild her life.

“I’ve taken it back,” said the Juno award-winning singer and recipient of the Order of Canada.

“But still, when I come back home to Rankin, I’ll be at the store and I’ll be cautious and take a quick look down the aisle in case he’s there.”

Aglukark said you could “fill the room” with Ford’s victims, which suggests there are many others who have not disclosed the abuse.

Aglukark made a handful of recommendations to the commission, starting with community-based services for victims of abuse.

She pointed to Rankin Inlet’s healing centre, which offers rehabilitation for abusers and other offenders, but not for their victims.

She suggested the creation of community advisory councils to provide the proper family history and context to agencies that are investigating abuse.

Aglukark said authorities must also draw a clear line between those offenders who can and cannot be treated.

“Predators will always be predators,” she said. “He shouldn’t be here.”

The National Inquiry into Missing and Murdered Indigenous Women and Girls wrapped up its three-day hearing in Rankin Inlet Feb. 22—the commission’s first hearing in Inuit Nunangat.