With many poor and homeless, sustainability hard to deliver 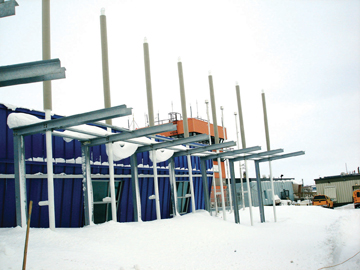 Kuujjuaq’s airport features an entrance canopy formed from a series of pipes called thermosiphons, which regulate the temperature under the building to prevent permafrost from melting, but housing built in Nunavut and Nunavik rarely includes these kinds of measures improve durability and energy-efficiency. (FILE PHOTO)

MONTREAL — Here’s the good news: new houses in the Canadian Arctic are now built to much higher energy-efficiency standards than they were five years ago, by a factor of 50 per cent.

The North is good testing ground for new technology, said Bill Semple of the Canada Mortgage and Housing Corp., at an April 26 discussion on sustainable community infrastructure at the International Polar Year conference in Montreal.

Among other improvements, Canada’s national housing agency is looking at a new northern heat recovery system, which, “if it can work in the North, will work anywhere.”

And the CMHC plans to test out new technology in the construction of Cambridge Bay’s future Canadian High Arctic Research Station.

The bad news is that many challenges remain, such as lack of money, materials, local workers and time.

Meeting the goal of sustainable housing in the Arctic is tough, said other panelists, who included Iqaluit mayor Madeleine Redfern and architect Alain Fournier.

While there’s often more money for public buildings like airports, social housing tends to get less funding, said Fournier, who designed Iqaluit’s yellow airport building as well as the new Nunavik airports in Kuujjuaq and Puvirnituq.

And there’s not enough of the housing to go around.

This means it’s hard to even think of achieving sustainable housing when three families are living in a unit designed for one family, because no structure can stand up to that level of use, Fournier said.

A panelist representing the Quebec government, Robert Marquis, a deputy minister for mining, touted Plan Nord, with its promise of new housing for Nunavik along with alternative energy sources and even designing expertise from mining companies, but Fournier wasn’t impressed.

While “billons of dollars are swirling above their heads,” people in Nunavik are still crammed into houses meant for one family, not three, he said.

So the bottom line has nothing to do with sustainability: it’s that there are still 1,000 people lacking homes, he said.

That makes it difficult to work towards sustainability: “in survival mode we are, at best, going to get buildings as durable as possible and everything as energy efficient as possible,” Fournier said.

In Iqaluit, there are lots of reasons to reasons to encourage sustainable building practices, because the city grows by 300 people a year, and making sure homes are energy-efficient saves money spent on diesel fuel, Redfern said.

But the growing city is squeezed for money, Redfern said, and has to look for public-private partnerships to build new any larger community infrastructure.

And, as for building sustainable private homes, you first have to get people interested in home ownership in Iqaluit, she said.