Voyage of the Iceberg 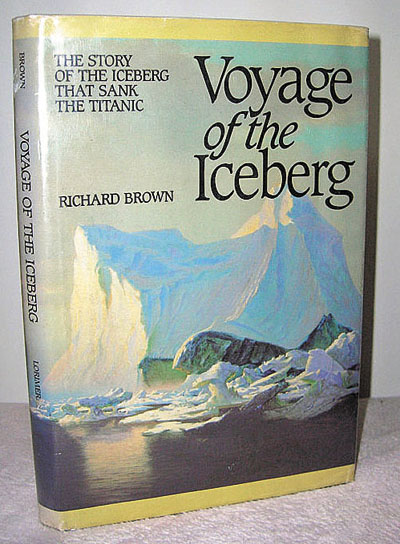 The original cover of Voyage of the Iceberg by Dick Brown, first published in 1983.

Titanic mania has now subsided. Only a few weeks ago, one could not turn on the television without being besieged by programs analyzing the story of the ill-fated ship from every conceivable angle.

Stories of survivors, biographies of victims, documentaries on the engineering of the ship, the role of the overly-busy radio operator in ignoring warnings about icebergs in the waters ahead of the ship, examinations of chivalry in exploring whether men were gentlemanly in offering women and children first place in the lifeboats. Every avenue was explored.

Halifax suffered a mid-winter tourism boom as relatives of victims and the just-plain-curious flocked to the city that had been the centre of rescue and recovery efforts.

And – almost too late to capitalize on the public’s interest in the tragedy – a wonderful Canadian book was republished. Lorimer, a Toronto-based company formerly headquartered in Halifax, republished “Voyage of the Iceberg,” sub-titled “The Story of the Iceberg that Sank the Titanic.”

Strangely, it did not appear until April 9, only a few days before the anniversary of the great vessel’s sinking. That may explain why there was little mention of this book among the many discussions of the Titanic in literature that were also on our radios and television screens.

“Voyage of the Iceberg” was first published in 1983. The author, Richard Brown, was a marine biologist with the Canadian Wildlife Service and an authority on maritime bird life.

The premise of his book was simple. An iceberg sank the Titanic. Why not tell of this event as two stories – that of the ship itself, and a parallel story about the iceberg that sank it.

That iceberg was one of thousands that coursed through the waters of the North Atlantic. It had no name, no definitive past, and no future. Adrift in the waters of the ocean that would cause its eventual demise, unknowing and unseeing, it tore a hole in the hull of the Titanic and sealed the fate of over two thousand people, three-quarters of whom would perish in those same frigid waters.

Dick Brown writes in alternating chapters about the ship and the iceberg. He tells of the commissioning of the vessel, its building, its launch, its departure from Southampton.

In between he describes the iceberg breaking loose from the great Greenland icecap and beginning its own voyage in Disco Bay, Greenland. Currents take these freshly-minted icebergs north through Melville Bay, then in a counter-clockwise trip through Baffin Bay and down the Baffin coast, from where they enter the North Atlantic. In these chapters, Brown describes the marine life of the Arctic, and what was going on in Greenland and Baffin Land in the years immediately preceding the disaster.

The device of using alternating chapters to tell a story from two perspectives is not new. Sometimes it works, sometimes not. Here it works wonderfully well, leading to the collision that every reader knows is coming.

I read this book when it first came out almost three decades ago. I was spellbound. I recommended it to everyone who would listen. At Arctic Ventures, I offered money back to anyone who regretted purchasing it.

There were no refunds.

Strangely, a number of people told me that the book made them angry. Why, I asked. Because, they said, the premise of the book, the story of the iceberg that sank the Titanic, was so simple that they could have written it themselves.

While that may have been true, none of them did. Only Dick Brown did. And he did it superbly. Sadly, Brown did not live to see his book republished; he passed away in Nova Scotia in May 2010.

It is a pity that Lorimer did not reissue this book months – not just days – before the anniversary of the collision between the iceberg and the Titanic. It deserves to be more well-known. I can’t recommend it highly enough.