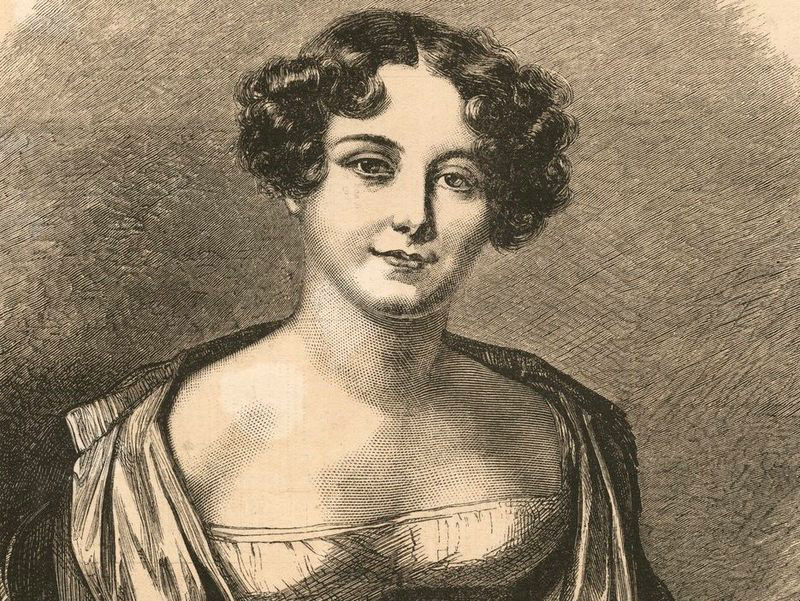 Lady Jane Franklin, wife of Sir John Franklin. Her husband travelled through Newmarket, Ont., located in what was then called Upper Canada, in 1825 and Lady Franklin later donated a bell to St. Paul’s Anglican church in Newmarket. (HARPER COLLECTION)

It wasn’t until I developed an interest in the story of Sir John Franklin, as part of my interest in Arctic history, that I learned that I had grown up with an item of Franklin interest nearby.

In my hometown of Newmarket, Ont., the main Anglican church is St. Paul’s. It is, appropriately, on Church Street.

I’m not Anglican, so I knew none of this while growing up. But in recent years I’ve learned that the church bell at St. Paul’s was provided by none other than Lady Franklin, wife of Sir John.

John Franklin was married twice. His first wife, Eleanor Anne Porden, died in 1825 only six days after Franklin left on his second Arctic expedition. On his return, he renewed his acquaintance with his late wife’s close friend, Jane Griffin, and married her in November 1828. The following year, with her husband’s knighthood, she became Lady Franklin.

It was initially thought that Lady Franklin had provided the funds and the direction for the bell for St. Paul’s in her will.

But that turned out to be a misconception. Lady Jane died in 1875, but church records show that the bell was in use much earlier than that. In fact, in 1863, Canon S. P. Ramsay asked the village council for funds to replace the bell’s rope, which, he claimed, was worn out through almost constant use for village, rather than religious, purposes.

The mystery was solved, however, when more recent research showed that the bell had been donated by Lady Franklin in 1836, two years after the first church building was constructed. (The confusion had been exacerbated because, when she died four decades later, Lady Franklin’s will contained a bequest for “a bell for the nearest English Church to the shores of Lake Simcoe.”)

But what prompted Lady Franklin’s interest in Newmarket?

It is simply this. In 1825, John Franklin began his second British Arctic Land Expedition, to explore the northern coast of North America from the Mackenzie River delta.

Supplies and some of the men had been dispatched through Hudson Bay to Cumberland House in what is now Saskatchewan. Franklin and his officers travelled to New York on the Columbia, and made their way overland to Cumberland House, from where the expedition proper began.

Their route from New York took them through Newmarket. Franklin wrote:

“We crossed Lake Ontario in a sailing boat and came to York [the old name for Toronto] where we were kindly received by the Lieutenant-Governor, Sir Peregrine Maitland…. From York we passed on to Lake Simcoe, in carts and other conveyances, halting for the night at the hospitable house of Mr. Robinson at Newmarket.”

In fact, Franklin travelled from York to Newmarket on April 7 with William Robinson, a fur trade entrepreneur who, with his brother Peter, ran the firm of P. and W. Robinson. They were based in York and Newmarket, and had been engaged to transport Franklin’s supplies to Penetanguishene on Georgian Bay.

A few days later, on April 11, Franklin wrote to the Robinsons from farther north: “You will be glad to learn that we reached the [Nottawasaga] river by nine o’clock this morning with all our stores. I feel much indebted to Mr. Beman for all his exertions.”

“Mr. Beman” was Eli Beman, stepbrother of the Robinson brothers. The Beman and Robinson families were powerful and influential supporters of the government in York and the supremacy of the Anglican Church.

John Robinson, another brother, and Bishop John Strachan were the leaders of the group known as the “Family Compact,” a group that “exercised most of the political, economic and judicial power in Upper Canada [Ontario].”

Lady Franklin was a politically astute woman who never failed to advocate for the interests and advancement of her husband.

It is only natural that, when she heard of the construction of St. Paul’s church in Newmarket, she would donate a bell in remembrance of her husband’s brief association with the town. In the mind of a wily woman like Lady Franklin, one never knew when such a connection might prove helpful.