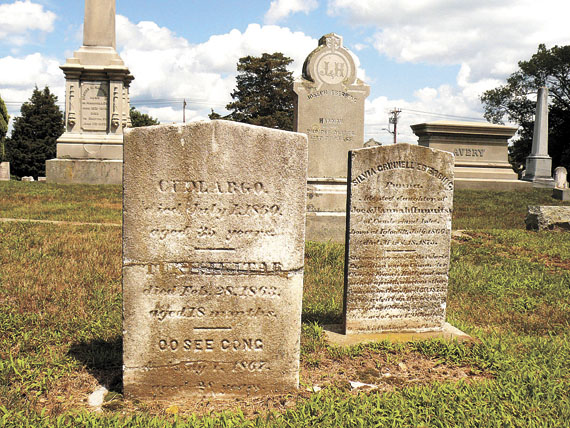 The cemetery at Groton, Conn. contains the graves of half a dozen Inuit from the Baffin region. (HARPER COLLECTION)

Last week I wrote about the visit of two Inuit from Cumberland Sound to Groton, Conn., in 1866. Abbott (Kud-lup-pa-mune) and Jeannie (Ou-se-gong or Ooseecong) were guests of a whaling captain, Sidney O. Budington, and his family.

The following year, they once again boarded the whaling ship for the return journey to far-off Baffin Island, laden with gifts for their family. Unfortunately, Jeannie died on the voyage. And was probably buried at sea.

But Budington saw to it that she was remembered in Groton. Her name was engraved on a small memorial stone in the Starr Burying Ground there.

In fact, this cemetery contains the graves or memorials of half a dozen Inuit, all of whom had been visitors to the picturesque Connecticut town in the days when whaling was an economic force on Baffin Island.

The oldest memorial contains the names of three Inuit. The earliest to die was the unfortunate man whose name is recorded as Cudlargo.

He had come to Groton in 1859 with Budington. The following year, Charles Francis Hall, travelling north with Budington, met the Inuk aboard ship, returning to Baffin Island from his year of adventure in the south. Hall recorded his name as Kudlago. In fact it was probably Kallarjuk. Sadly he did not live to see his homeland again.

On July 1, off the Greenland coast, still 300 miles from home, Kudlago spoke his last words. Hall recorded the man’s pitiful question. “Taku siku? taku siku?” he asked hopefully. (“Do you see ice? Do you see ice?”) Then the man died. He was 35 years old. Budington buried him at sea but had a monument erected in the Starr Burial Ground bearing the man’s name, date of death, and age.

In 1862 the Inuit couple, Hannah and Joe (Tookoolito and Ebierbing), who would go on to be the most well-travelled Inuit of their time, went to the United States with Hall, travelling on Budington’s ship.

With them was their infant son, Tarralikitaq — the butterfly. Tragically, the baby died in New York early in 1863 while he and his parents were on exhibit, providing publicity for Hall’s fund-raising efforts for his next expedition.

The Budington family arranged the boy’s funeral. His name on the grave marker is below that of Cudlargo, and is spelled Tukilikitak. His date of death is given as Feb. 28, 1863, and his age as 18 months.

Jeannie, whose death aboard ship, was recounted last week, completes the names of Inuit on this simple marker. Her Inuktitut name is given, spelled Ooseecong. Strangely, her date of death was seven years to the day after that of Cudlargo.

Beside this marker stands another Inuit headstone, the story of an expedition chiseled into it in tiny letters. The girl buried here was the adopted child of Hannah and Joe, a sister to Tarralikitaq, the brother she never knew.

Her real name was Isigaittuq and she had been born in Igloolik. Hannah and Joe adopted her while travelling with Hall on his second expedition. Hall named her Silvia Grinnell Ebierbing (his spelling of Ipiirvik). Her parents simply called her Panik – daughter – which Hall mangled in print as Punna.

I’ve told her story before. She and her parents were survivors of a remarkable drift on an ice floe from northern Greenland to just north of Newfoundland. Panik survived the drift, but her health was shattered. Early in 1875 she came down with pneumonia and died on March 18 in Groton.

The letters on the simple headstone tell, in abbreviated form, the life of this much-travelled Inuit girl who died before she was nine. Obscured by the grass at the base of the stone, these words are still faintly visible: “Of such is the Kingdom of Heaven.”

Towering over these two headstones is an enormous marker crowned with the initials “J & H”. It is the grave marker for Joe and Hannah. Hannah died in Groton on the last day of December, 1876. She was 38 years old.

The stone has a space, above Hannah’s details, to record the subsequent death of her husband, whose name is inscribed as Joseph Eberbing. (The usual spelling is Ebierbing.) But no date of death is given and Joe’s body does not lie here. He returned to the Arctic after Hannah’s death and died on an unknown date in the Kivalliq Region.

I’ve visited these lonely graves more than once. Others I know from the Arctic have also stood silently in front of them to pay their respects.

Three memorials, six Inuit names, but only three bodies, all from the same family. Sidney O. Budington is buried nearby.

He and his family ensured that the Inuit who visited Groton in the heyday of whaling would be remembered.