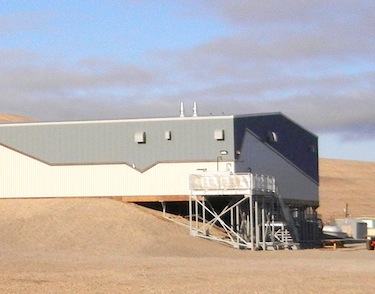 When Lorne Kusugak, Nunavut’s minister of community and government services, and Quttikuq MLA Ron Elliott are in Resolute Bay Oct. 29 for the opening of the community’s new arena, seen here, the two MLAs plan to visit the site of the large spill at the Government of Nunavut-owned tank farm. (PHOTO BY JANE GEORGE)

A massive clean-up effort will get underway in Resolute Bay, where on Oct. 28 the community’s tank farm spilled an estimated 100,000 litres of fuel.

The cause of the spill remains unknown and the RCMP have launched an investigation.

In the meantime, the spill has been contained and there are no reported injuries, an Oct. 28 Government of Nunavut press release said.

“Our petroleum product division will be on the ground [Oct.29], but is already working with the local community fuel delivery contractor and other stakeholders to contain the spill and clean up contamination,” Lorne Kusugak, Nunavut’s minister of community and government services, said in the release.

Kusugak and Quttikuq MLA Ron Elliott were already scheduled to visit Resolute Bay Oct. 29 for the opening of the community’s new arena.

Now the two MLAs plan to visit the site of the spill.

Kusugak assured residents of Resolute Bay that his department will ensure the community receives enough fuel to last until the next sealift.

“I want to assure the residents of Resolute Bay that this oil spill will not affect the community’s gasoline supply,” he said.

The investigation has been hampered by the long hours of darkness in Resolute Bay, the release said. But after Oct. 29, officials expect to get a better estimate of how much fuel was lost in the spill.