“People should wear and eat seal as much as possible” 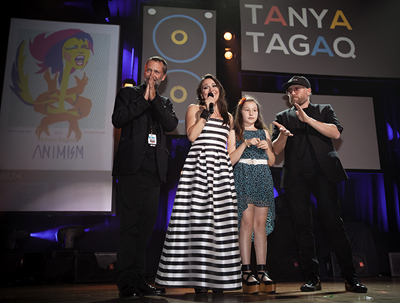 Cambridge Bay-raised Tanya Tagaq beat out nine other artists Sept. 22 to pick up the 2014 Polaris Music Prize for her latest album Animism.

Tagaq was one of 10 finalists — among them Arcade Fire, Timber Timbre and Drake — in running for the award and its $30,000 cash prize, given each year to honour “creativity and diversity in Canadian music,” regardless of album sales.

Tagaq’s third album Animism, a collection of pounding rhythms, throaty and operatic voices, French horns and strings, has won acclaim for the Manitoba-based artist since its release last spring.

Through her music and intense live performances, Tagaq has also used her craft to draw attention to issues affecting Inuit and indigenous peoples across the world.

The Inuk musician and throat singer wowed an audience at the Polaris gala in Toronto Sept. 22, performing the track Uja, accompanied by a 40-member choir.

She took the stage barefoot, in a low-cut red dress and sealskin wristbands, while a screen behind Tagaq scrolled through the names of Canada’s missing and murdered indigenous women.

The 10-minute performance earned her the only standing ovation of the night.

When she was announced as the Polaris prize recipient, Tagaq returned to the stage with her daughter Naia to thank her supporters.

“On a quick side note, people should wear and eat seal as much as possible,” Tagaq said Sept. 22. “If you imagine an indigenous culture thriving and surviving on a sustainable resource, wearing seal is.

“And eating it — it’s delicious,” she said, before adding “fuck PETA,” referring to the animal rights group People for the Ethical Treatment of Animals.

Tagaq has been a vocal supporter of the “sealfie” campaign that grew on social media last spring, when Inuit across the country posted photos of themselves in sealskin products to defend and promote the Inuit seal hunt.

Support for Tagaq’s Polaris win poured in from across the country late Sept. 22, no less from Nunavut and Cambridge Bay, where the artist is both controversial and celebrated.

@tagaq congratulations on the big win! All of us here at home are super proud of you. #ajunngi #PolarisPrize2014

a GIANT congratulations from Cambridge Bay to @tagaq on winning the #Polaris2014! WE ARE SO PROUD OF YOU! You are my hero!

“We’ve been doing it our way without backing down artistically or confirming, so to be recognized in this way and have so many people latch on makes me feel the world is tolerable,” Tagaq said in a Sept. 22 statement.

“There’s so much hurt in the world and within indigenous cultures with colonialism,” she said. “Canada is in desperate need for repair and I think a lot of people are tired of living this way and just to have people understand where we’re coming from makes me have hope that we can move forward and expose the true history of Canada.”

The Polar Music Prize winner is selected by a jury of 11 music journalists.