“We were there to curl. We were able to compete” 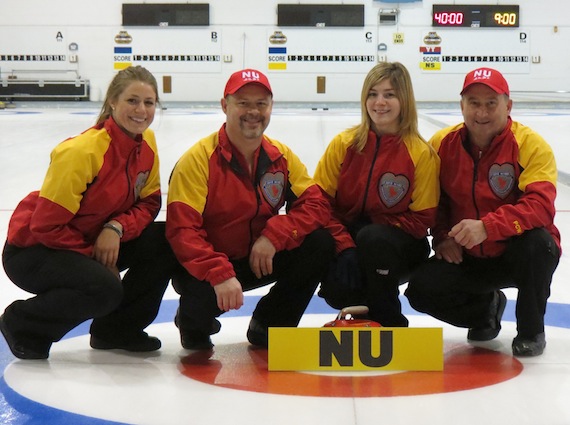 At the Town of Mount Royal Curling Club in Montreal, Team Nunavut beat Team Newfoundland and Labrador and just missed out on an opportunity to move into the main round robin competition of the tournament — in which each team meets the other teams in turn — by losing to Team Yukon.

Last year at the same championship, Nunavut won its first ever game at a Canadian Curling Association event against Team Yukon.

“We were there to curl. We were able to compete,” said Masson, one of the four members in Team Nunavut.

Nunavut ripped to a strong four-point lead in their second match against Team Newfoundland and Labrador in the fourth end after losing to Nova Scotia in the first of three games in the qualifying round.

But hearts sank when the Maritimers roared back, gaining a two-point advantage in the sixth end.

“Then we started talking to ourselves — we can come back from this. So the next end, we got three points back,” he said.

After that, Nunavut took another two points and ended the game 10-7, upsetting the top-ranked team in the qualifying round.

“We were elated to be able to win that game. We weren’t expected to win, they were probably expected to go on,” Masson said.

For Team Nunavut’s final game in the qualifying round, the pressure was on against Team Yukon — a win that would cast them into the main event.

And even though this year’s Yukon team had an entirely different crew as the one they beat last year, Masson thought his team had the potential to be the Cinderella story at the championships and win the match.

“We thought we had a good of a chance, as they did for sure. But we just didn’t play as well as we did against Newfoundland,” Masson said.

“We played more their style. We just went on hits and hits, and missed some hits here and there,” Masson said.

Although Masson says Nunavut had a big outing this year, there are still many off-the-ice issues that restrict Nunavut from doing well in big competitions.

“Some teams play 30 games before they get there. And we had only been curling for three weeks before we got there,” Masson said.

While you’d think that cool Nunavut would have the edge in a game that played on ice, the curling rink in Iqaluit only had its ice installed on Oct. 23.

“It’s just a matter of… until we get our ice in earlier and get a little more ice time, we’re going to have a hard time competing for some of these championships,” Masson said.

Masson wants a facility dedicated to just curling, and also thinks the team needs to put a bit more pressure on the City of Iqaluit to put the ice down quicker next year.

It’s not easy finding more competition either — many curling teams around Canada have the option of travelling a couple hours down the road by car for a new challenge, an impossibility for a team in Nunavut.

And that’s something Nunavut will always struggle with, explains Danny Lamoureux, director of the Canadian Curling Association’s curling club development and championship services.

“[Nunavut’s] basically an infant in curling. And they have growing pains, obviously, because of the distances and the lack of roads, and you can only travel by air,” Lamoureux said.

“But they’re moving, they’re moving forward. Which is exactly what the CCA was hoping when they became an official association,” Lamoureux said.

Lamoureux thinks it will take ten to 15 years before Nunavut can be a championship contender. But when that new generation pops up, Nunavut might be tough team to beat.

“My personal opinion is we’re going to see kids under the age of 20 get better quicker, only because that’s a dominant part of the population, is youth,” Lamoureux said, who says he’s been to Iqaluit about 15 times in his life.

And that new generation could start their ascension to the top at the Canadian Junior Curling Championships in Fort McMurray, British Columbia, in February 2013.

Nunavut is sending a men’s and woman’s team to the event, the first time Nunavut has ever competed in the juniors.