“Thank you for nothing,” say furious MTS barge clients in Cambridge Bay

“They think they can ignore this … and it will go away, but the more they ignore this one, the bigger it will get” 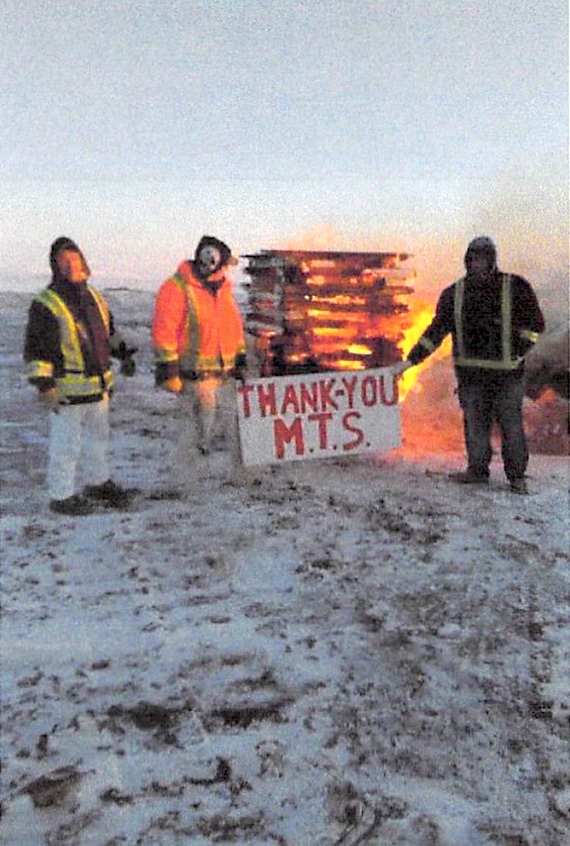 As they burn mouldy flooring, workers at Kalvik Enterprises Inc. in Cambridge Bay hold a sign saying “Thank-you, M.T.S.” The sign refers to the Oct. 1 cancellation of the last resupply barge into Cambridge Bay by Marine Transportation Services, which then triggered a limited airlift of supplies. (PHOTO COURTESY OF KALVIK ENTERPRISES) 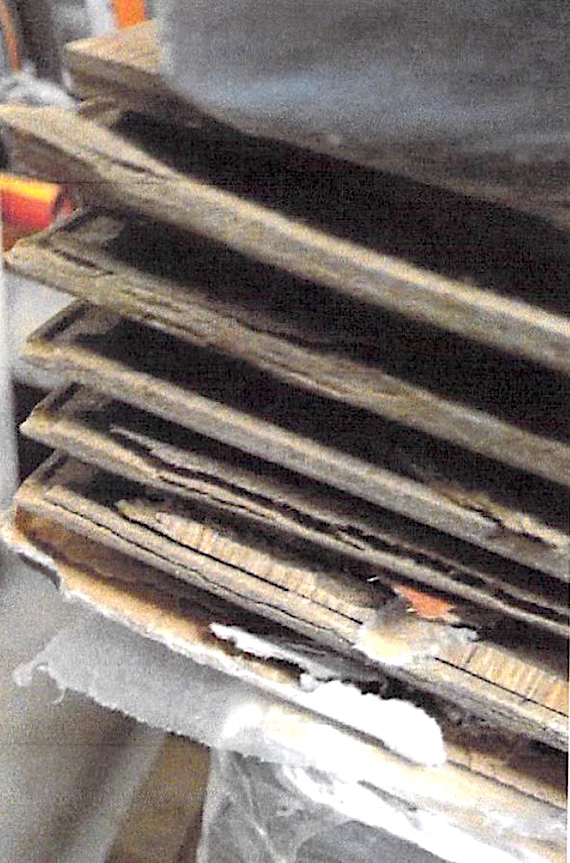 This is how the flooring looked when Peter Laube of Kalvik Enterprise Inc. opened it. (PHOTO COURTESY OF KALVIK ENT.)

Peter Laube, the owner of Kalvik Enterprises Inc. in Cambridge Bay, went to the local landfill with his workers this weekend to start a fire.

Its fuel? A lot of mouldy flooring that recently arrived at Laube’s workshop.

The flooring, which was intended for two construction projects, was part of his larger cargo order airlifted to Cambridge Bay by the Government of the Northwest Territories after the GNWT-owned Marine Transportation Services cancelled the last resupply barge into the western Nunavut hub on Oct. 1.

At the dump, Laube’s workers held a sign up saying “Thank you MTS,” as the flooring burned in the -40 C wind chill.

After the cancellation of the MTS barge, Laube was left with a pressing list of jobs to finish, but no materials.

Others in this regional hub of about 1,900 are in similar positions, without cargo orders that included construction materials, dry goods—including many pallets of soda pop—and numerous trucks.

Shortly after MTS announced the barge would be cancelled, the GNWT promised to airlift everything to Cambridge Bay.

But then the GNWT backed away from this plan, after issuing a tender, saying only fuel, dry goods and smaller vehicles, like snowmobiles and all-terrain vehicles would go on the limited airlift.

The flooring was warped and full of mould when it finally arrived at Laube’s workshop, he said. MTS had promised heated storage, but Laube said the flooring had obviously been stored outside in Inuvik and, as a result, was wrecked.

“They brought it in and dumped it at my workshop. They never contacted anybody,” Laube said about the floorings’ unexpected arrival on one of the charters that flew into Cambridge Bay.

Laube said he is also angry because he has never received proper responses to his phone calls. He now faces a potential loss of business and additional expenses to fly in new materials to meet extended deadlines for projects.

“They think they can ignore this, probably, and it will go away, but the more they ignore this one, the bigger it will get,” Laube said.

Meanwhile, many of Laube’s workshop shelves are empty.

“How do they expect a cabinet shop to manufacture these cabinets when their materials are buried in snow in the MTS yard in Inuvik?” he asked.

In a letter that he wrote this weekend to the GNWT and MTS, Laube said MTS has put a huge financial strain on his business.

“Where is the GNWT? When are they going to step up and fix the massive damages their employees cost the public?” he wrote.

But during a debate in the N.W.T. legislature, many MLAs seemed to accept the argument that unavoidable ice conditions caused the barge cancellation, and Wally Schumann, the infrastructure minister responsible for MTS, survived the motion of non-confidence.

Attached to Laube’s letter, which he shared with Nunatsiaq News, are letters from some of his clients.

“We are not able to accept the flooring that you presented us with, which is molded and warped,” wrote Denica Nahogaloak with the local child care centre.

Donna Olsen-Hakongak also said that the materials that arrived on Oct. 31 were unacceptable. “I saw the flooring for my home and office was warped and covered with mould. It was completely destroyed and useless to … the flooring, as it is from MTS, cannot be used,” she wrote.

Laube said he is now looking into legal action with the Kitikmeot Chamber of Commerce, which had organized a meeting back in October, shortly after MTS cancelled the barge.

“What choice do I have?” Laube told Nunatsiaq News.

This year marked MTS’s second season of barging, after the GNWT purchased the assets of Northern Transportation Co. Ltd. for $7.5 million in 2016.

NTCL had also left Cambridge Bay in the lurch in 2014, when it never brought a large barge in.

Suzanne Maniyogina, a mother of four with a bad back, said she, like Laube, is still frustrated over this year’s barge cancellation.

Maniyogina bought a pick-up truck so she wouldn’t have to rely on anyone to drive her children around and help her with errands in -40 C temperatures.

She said she did get a refund of what she paid for the shipment to MTS in 2018 and a promise of free shipping in 2019. he had paid to have a truck shipped, but the barge was cancelled.

“But I’m still struggling and it’s minus 40 weather. I’m so frustrated,” she said.

Maniyogina has to wait another year before she sees her new truck, but she’ll have to pay for it while it sits in Inuvik.

She said MTS could have stepped up and found her some vehicle she could use for the year. “So many options but they don’t care anyway,” she said.

She also had a thank you of her own for MTS that she posted on social media: “Thanks GNWT for bringing up emergency junk for the stores here. You see how they are more important than my issues.”